It was McNeil's wild, one-handed and nearly sideways takeoff that left the biggest impression during the five-minute jam. At times he looked like he was going to pull 180, but he always whipped it backed around at the last second. He also threw combos in with his whips and earlier this summer he earned his first X Games invite and collected a silver medal in the Best Whip competition.

All of the riders hit a metal ramp to throw down their most stylish and tweaked out whips to impress Hart, who was the head judge. The remaining two judges were Tour athletes Alistair Whitton, a pro BMXer, and Anthony Furlong, who competes in skate vert. Each of the riders were given three intro runs, and it transitioned into the jam.

Other highlights of the competition included super stylish whips from Richmond, who won the Best Whip contest at the Dew Tour's Wendy's Invitational. Coury nose dipped his whip, Faisst was doing solid lookback whips and Cantrell even did whips the other way. A bunch of FMX tricks were thrown in during the event, including cliffhangers, lazy boys, and superman seat grabs.

Hart made a guest appearance during the intro runs to throw down a few FMX tricks of his own, before taking off his helmet and heading up to the judges tower. 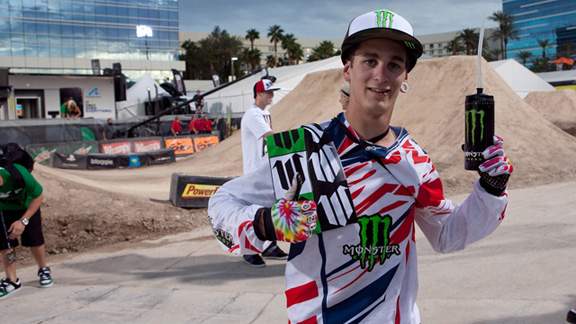