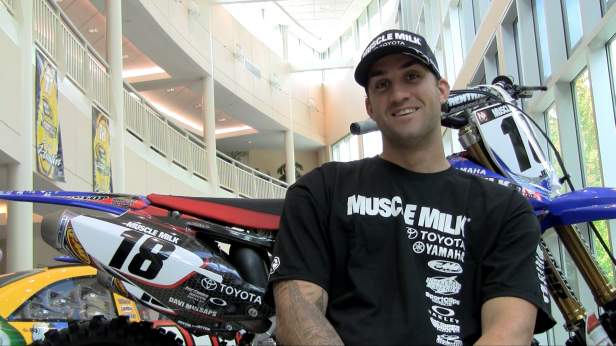 HUNTERSVILLE, N.C. – The Muscle Milk/Toyota/JGRMX Team is proud to welcome Davi Millsaps for 2011 racing season and beyond. The 22 year-old from Tallahassee, Fla. will accompany Justin Brayton in contesting the AMA Supercross and National Motocross Championship Series.

Millsaps will run the number 18, the first number ran by Joe Gibbs Racing in NASCAR 19 years ago and currently on Kyle Busch’s M&Ms and Interstate Batteries Toyota Camry. Millsaps, who claims nine amateur national titles, a Lites Supercross Championship, and numerous podium finishes including wins in the premier class, is energized about the 2011 season. "I am making some major changes in my program and look forward to having the best season of my career," said Millsaps. "Davi moved into a place near our NASCAR and motocross shops so he can train with our in-house fitness staff. He is focused and eager and I am excited to have him join the JGR family," Coy Gibbs, the team owner added.

Millsaps first scheduled race with the team will be the opening round of the 2011 AMA Supercross Championship on Jan. 8, 2011 at Angel Stadium in Anaheim, Calif. A brief video of Davi discussing his arrival at the Muscle Milk/Toyota/JGRMX Team can be seen right here, or below.