Merced, CA:  "Wow…What a weekend! "  The Legends & Heroes Tour, a comprehensive rolling museum of vintage bikes honoring the former champions, concluded its 2010 Tour at Thunder Valley MX Park during the Motocross of Nations in Colorado this past weekend.  The first American Team ever to go to the  MX des Nations was present.  The 1970 team included Mark Blackwell, Dick Robbins and Bob Grossi.  Tom White of the Early Years of Motocross Museum did us the honor of interviewing the champs who shared some great stories with the crowds who swarmed the display on both days. 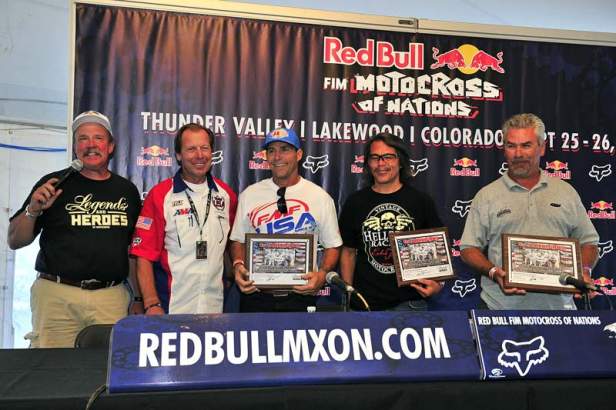 In addition to honoring the 1970 American team, we honored the First American Team to win the MX des Nations in 1981.   This team included Danny LaPorte, Johnny O’Mara, Chuck Sun and Donnie Hansen.  Unfortunately, Johnny O’Mara was unable to attend because of a conflict in his schedule.  Racing fans were able to mingle and chat with the six remaining champs from the 1970 and 1981 teams on both days after brief interviews and autograph sessions.

Gary Jones , 3 time National Champion,  stopped by to say "Hello" as did the Professor, Gary Bailey, the  1stAmerican to beat the Euro’s on US soil,  during their two appearances throughout the weekend.  The Professor’s passion for the sport runs deep as he’s committed to working with us for the 2011 season.    As he said over the weekend, the first generation has a lot of work to do in educating current and future generations of our sport.

An array of primo motocross machines were displayed… including the BSA Gold Star of Dave Dewoina to the cool Yamaha HR 500 of Scott Sears.  The line-up included Brad Lackey’s replica Yamaha 500 from the last season he raced as well as a cool Danny LaPorte replica!

Not only did we have great bikes and Champions in our "pits" but we were graced with the presence of Carrie Schmidt.   Carrie is the wife of the belated 2 Time World Champion Donny Schmidt.  It was so cool to meet her and be able to share some great stores.

Among the many volunteers over the weekend were Bill Silverthorn and Bob Leppold.   Bill is a legendary figure in our sport and has supported the tour many times over the past two years.  Bob is another up and coming supporter and has offered his services to help with future promotions by mean of video productions.   Without support such as this and the willingness by all our volunteers to lend a hand and display their own personal racing machines, this tour would not be possible.

We’d also like to thank our special MX of Nations sponsors for their support.  They include Doug Gagnon, DG Racing, Bob McClelland, Kissimmee Motorsports, John Gott, SLS Audio and Chris Carter of Motion Pro.   JT Racing USA was also there to support us!

The 2010 tour has been the most successful of our two years on the road.  This would have never been possible without the help of our volunteers, champs and friends.   I’d like to thank our volunteers across the country for this success as they provide us with the motorcycles for our displays "along the road".

Last but not least and most importantly it could have never happened without the tireless efforts of Rolf and Tami "Rice" Greenhill.  From website design and updates, photography, display set- up and tear down to t-shirt sales that support our tour…

Rolf and Tami are valuable assets to our program.

We thank you from the bottom of our hearts!