Washington’s Jim Pomeroy is one of the true fathers of American motocross. He was the first American to win a Grand Prix race, in 1973, and he appeared Team USA four times at the Motocross and Trophee des Nations.

His debut came in Norg, Holland, in 1972 with teammates Brad Lackey, Gary Jones, and Jimmy Weinert; the team placed seventh overall. The following year in Wohlen, Switzerland, Team USA had a string of bad luck, but in 1974, Pomeroy, Lackey, Weinert, and Tony DiStefano shocked the world by placing second overall to host nation Sweden at the MXoN near Stockholm.

Team USA only ran the Trophee des Nations in 1975, but it would prove to be a breakthrough day. Racing in the hills of Maggiora, Italy, Pomeroy won the opening moto on his Bultaco, marking the first time an American had won a moto at this prestigious event. Pomeroy backed it up with another sixth in moto two, helping the team to an excellent third-place overall finish.

Pomeroy retired from the sport in 1980. He was killed in an automobile accident on August 6, 2006, near his home in Yakima, Washington. 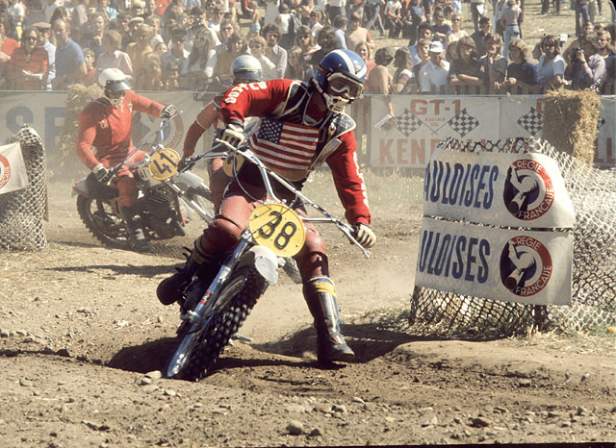 Perhaps no American rider has experienced the emotional highs and lows of the Motocross of Nations more than Jeff Emig. First tapped to join the team in 1992, Emig and fellow members Mike LaRocco (250) and Billy Liles (500) were dubbed the "B Team," as America’s top stars had decided to skip the event. Racing in the deep sand of Manjimup, Australia, the Yamaha YZ125-mounted Emig beat Belgium's Stefan Everts and Dutch rider Remy Van Rees to win his class and help Team USA win for the twelfth straight time. "When they raised the flag and gave us the trophy and played the national anthem, for the first time in my life, I knew what it meant to be an American and have pride in my country," Emig said.

The following year in Schwanenstadt, Austria, Emig notched 2-1 moto scores on his 125 and then watched as Mike Kiedrowski’s late-race charge in the third moto won the event for Team USA. Then came Roggenburg, Switzerland, in 1994. That's where Team USA—Emig, Kiedrowski, and LaRocco–finally lost. Emig was beaten in both 125cc motos by Great Britain's Paul Malin, who put in one of the event's all-time great performances. "I took so much pride in the MXoN that when we lost it, I was devastated," Emig recalled. "It was such a heavy moment that I cried."

While Emig won the 250 class at the '95 MXoN in Slovakia, teammates Steve Lamson and Ryan Hughes couldn’t push the team past the Belgians. The following year in Jerez, Spain, Team USA’s roster featured Emig (on a 500 Kawasaki), McGrath (250), and Steve Lamson (125). The Americans won every single moto. "For me personally, losing the des Nations in '94 was one of the biggest heartbreaks of my career, so to be able to come back in ’96 and have such a dominant event was just really special," Emig said. "We weren’t going to be denied that day."