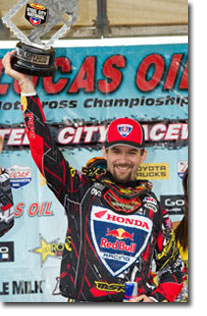 Chino, Calif. – September 7, 2010 – Yoshimura had a great day of racing at Round 11 of the AMA Pro Motocross series at the Steel City MX in Delmont, PA. Yoshimura riders used the power and performance of their machines to get to the top spot of the podium: both Kevin Windham and Ryan Dungey took moto wins in the 450 class, and Ashley Fiolek took the victory in moto 1 of the WMX series.

Under blue skies and with great weather for racing, the crowd was primed for a good show. The 450 class lined up for Moto 1, and with Ryan Dungey in the midst of the most successful rookie career in Motocross, he was the natural favorite. At the start of the race, Dungey got tangled up in the first turn with another rider and went down. Upon remounting, he realized that the front caliper was damaged and he wouldn't be able to finish moto 1. Meanwhile, Kevin Windham and his Yoshimura-powered Honda CRF450 were making their move at the front of the pack. Windham, the 32-year-old who's always a crowd favorite, fought his way to the lead and managed to take his first motocross moto win since 2007. Windham's teammate, Yoshimura's Andrew Short, finished fourth after getting a great start and staying up front for the entire race.

For Dungey, the second moto was on par with the majority of his championship season. With his Yoshimura-equipped RM-Z450, Ryan Dungey battled off the start and put pressure on the leader. Andrew short grabbed the holeshot on his Yoshimura-powered Honda and led for a short while, until temporary teammate Kevin Windham took over the lead. The two Yoshimura riders had a great battle, riding very closely together for a few laps. Short wasn't going to let the 32-year-old Windham past easily, and he put up a great fight and made it an exciting show for the thrilled spectators who lined the fences around the entire track. Windham finally made his way past Short, and Dungey wasn't far behind, making quick work of moving past Short and chasing down Windham. Dungey took over the lead not long after and started to pull away from the pack, as he has so many times this year. The newly crowned 2010 AMA Pro Motocross Champion held onto the lead throughout the race and finished ahead of Windham, who came across the finish line in second. Andrew Short put in another fourth-place performance, making it three Yoshimura bikes in the top four.

Kevin Windham, with his 1-2 moto finishes, took the overall victory, making him the first person to do so since Ryan Dungey started his phenomenal nine-race winning streak at Round 2 of the series. Dungey ended up sixth overall for the day with his second moto win, and Andrew Short finished fourth overall. Short is now third in overall points going into the final round of the series.

In the WMX class, Ashley Fiolek was determined to improve her second-place position in the championship chase. The first moto went exactly how Ashley had hoped: Her Yoshimura-powered Honda CRF250 took to the front of the pack immediately, and she stayed there for the entire race. Ashley was fluid and smooth on the track, she had plenty of power on tap to keep her in the lead, and she was focused on winning. With one win under her belt, she was looking to make moto 2 just as successful. When the gate dropped, Fiolek blasted out and grabbed the holeshot. Another racer took over the lead shortly thereafter, but Ashley had plenty of fight left in her and a lot of power on tap. With quickening lap times, she put pressure on the leader and retook the lead. Again, there was a battle and Ashley was put back into second place. The defending WMX champion tried one more time to take the lead, but ended up falling down on the last lap. She recovered but had to settle for second, and with her 1-2 moto scores she came out in second overall for the day. She is now 22 points out of first place in the championship with one race left of the schedule.

The Yoshimura riders are busy at work preparing the for series finale at Pala Raceway in California on September 11. 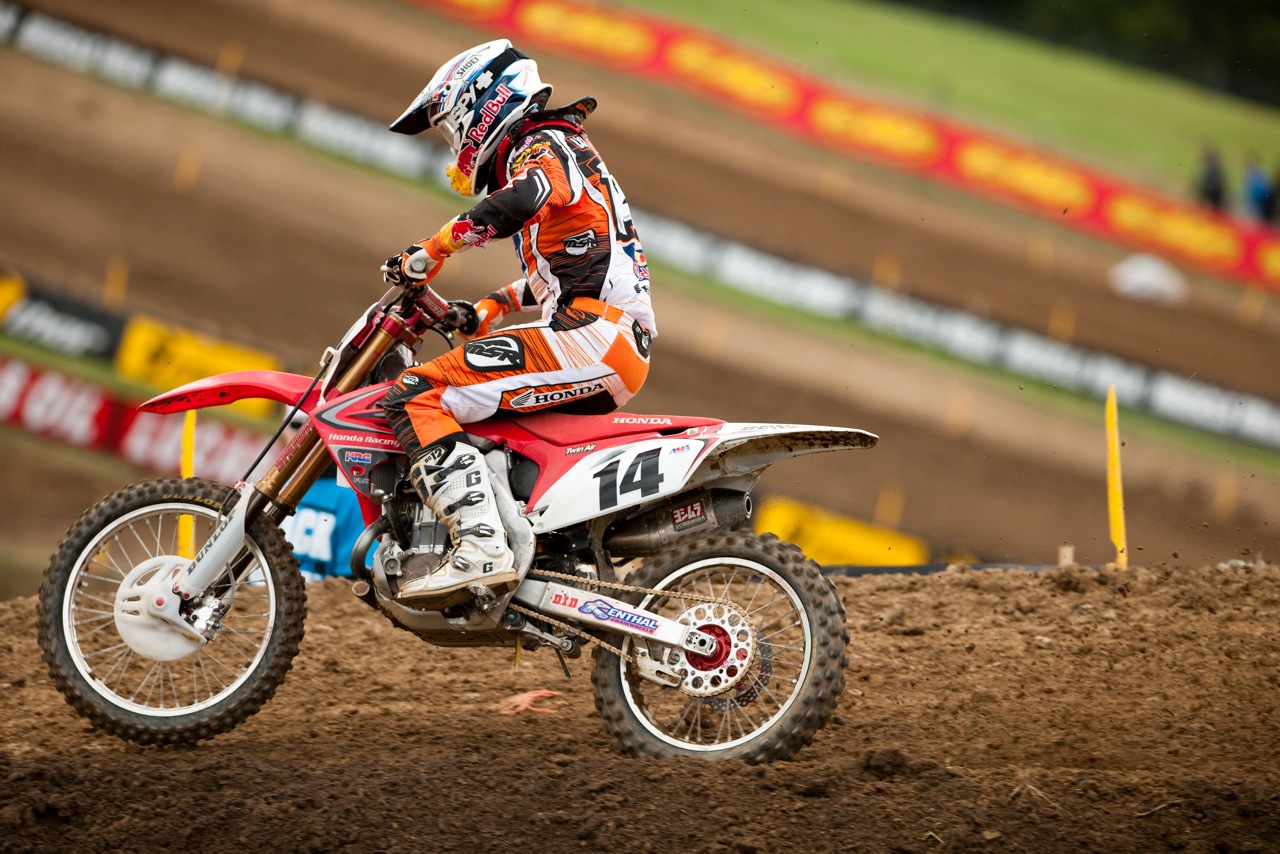 Kevin WIndham took the overall victory with his 1-2 moto finishes. 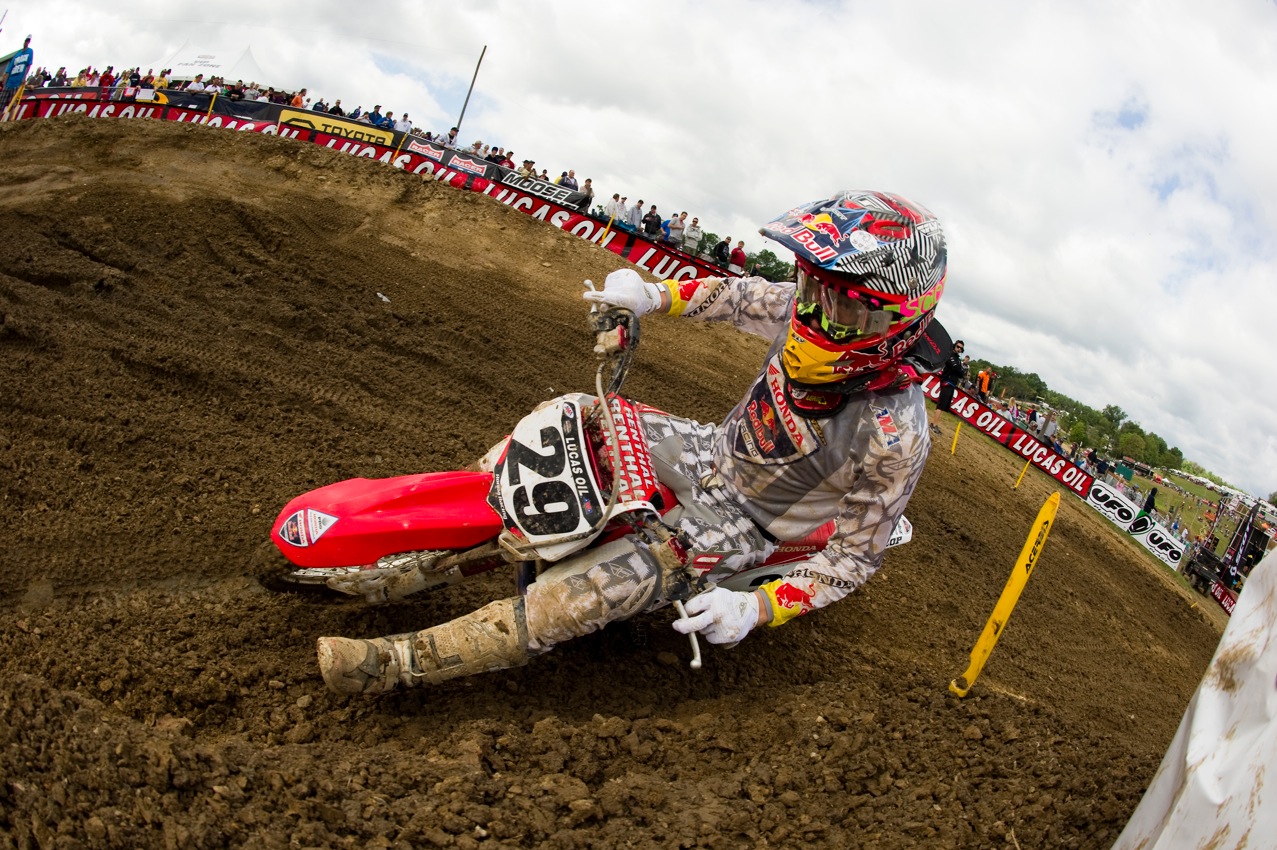 Andrew Short was consistent all day and finished fourth overall. 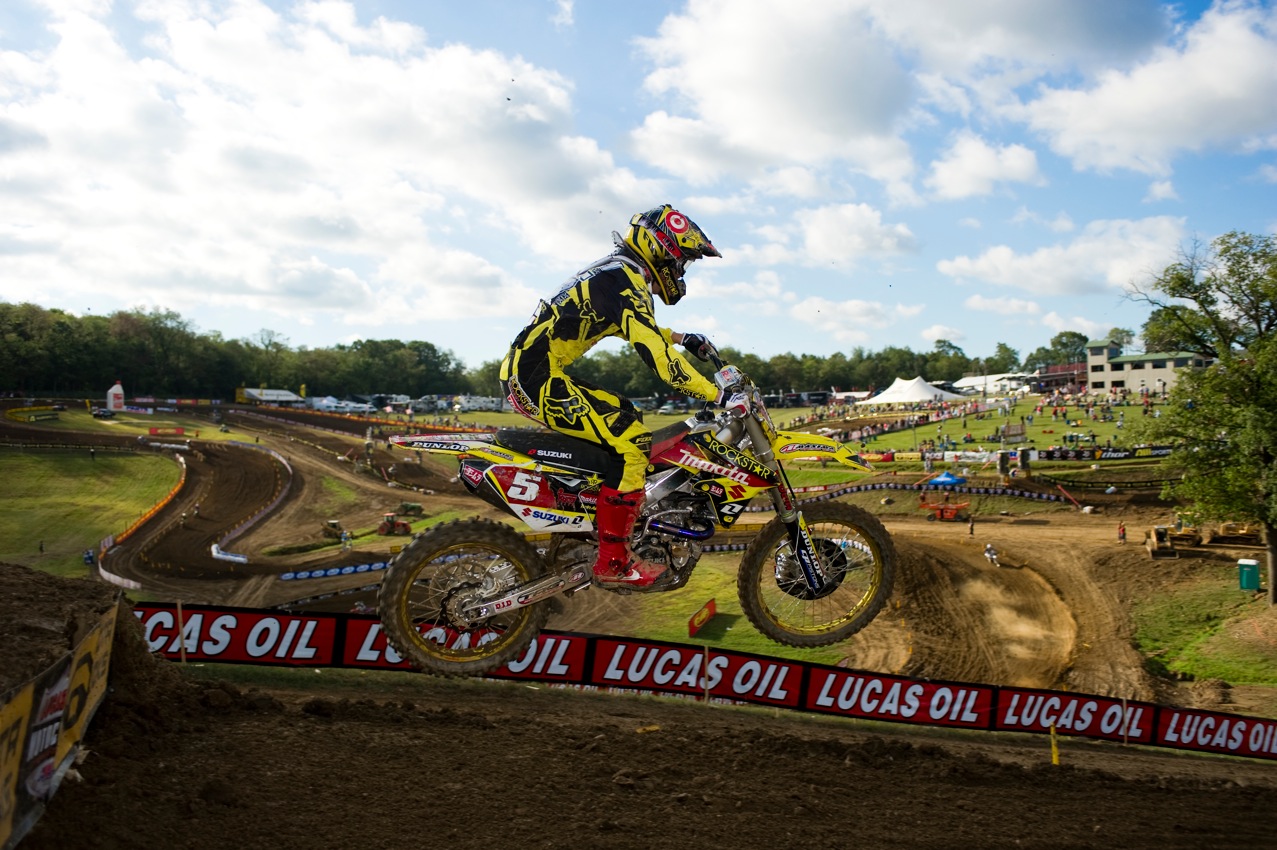 Ryan Dungey took top honors in the second moto of the 450 class at Steel City. 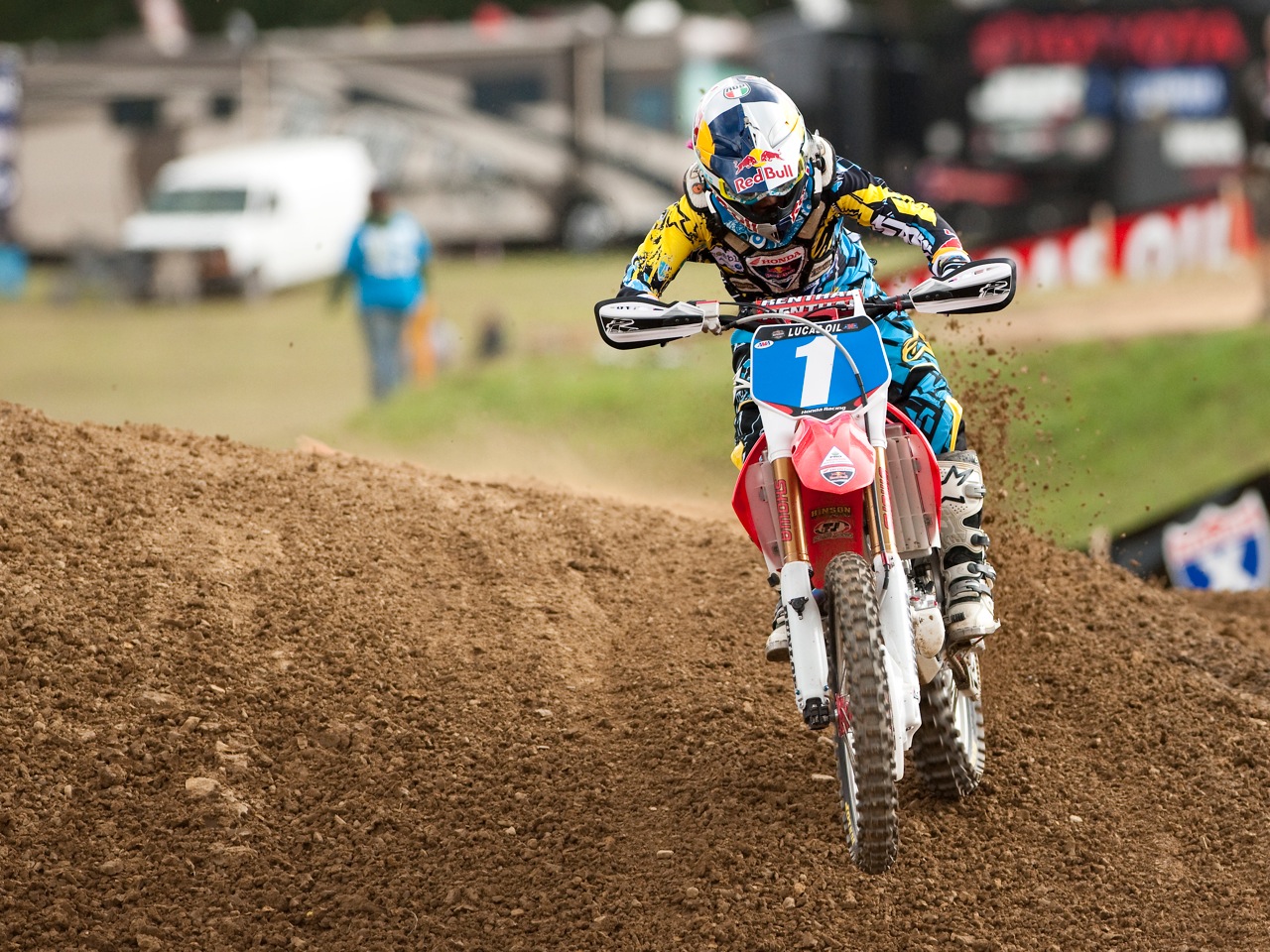 Ashley Fiolek showed a lot of determination and talent with her 1-2 moto finishes on Saturday. 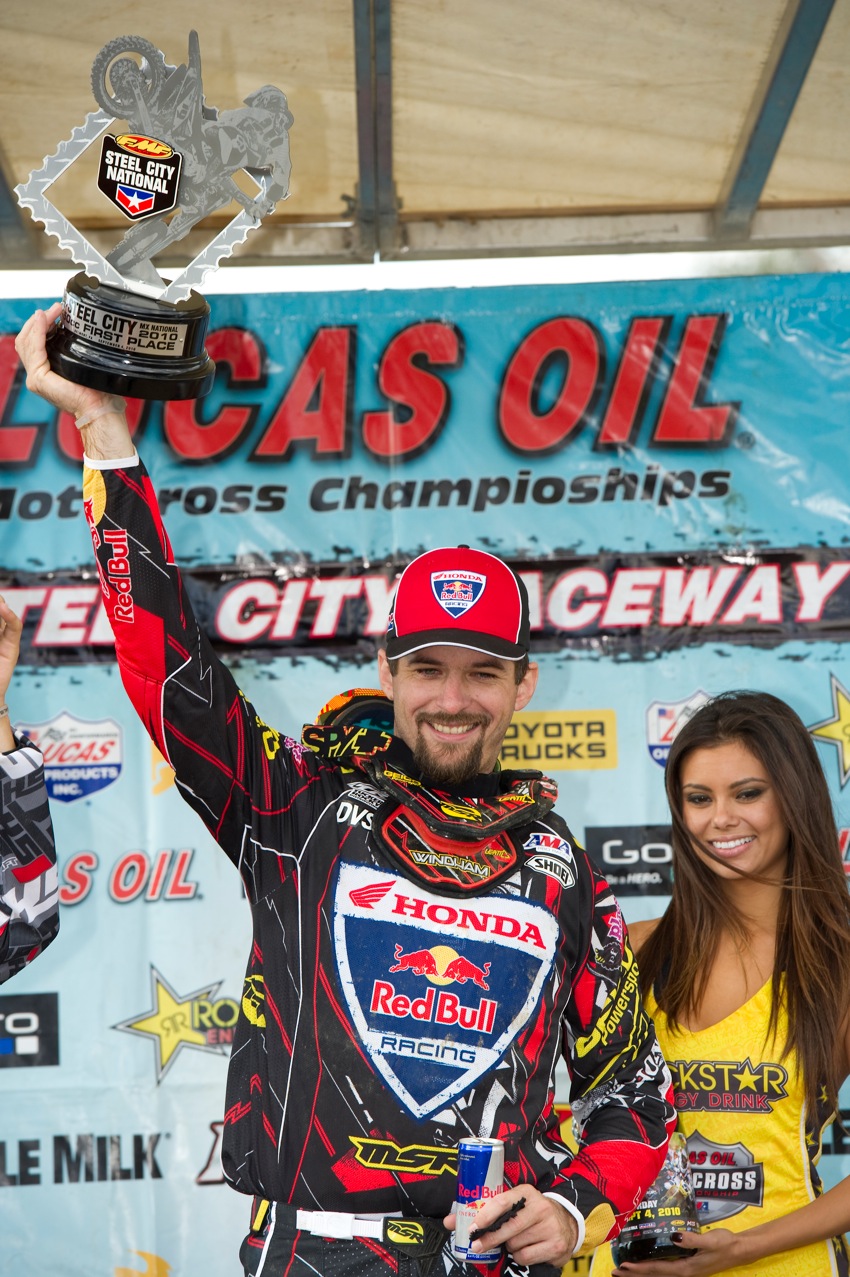 Kevin Windham made the crowd go wild with his first moto win since 2007. 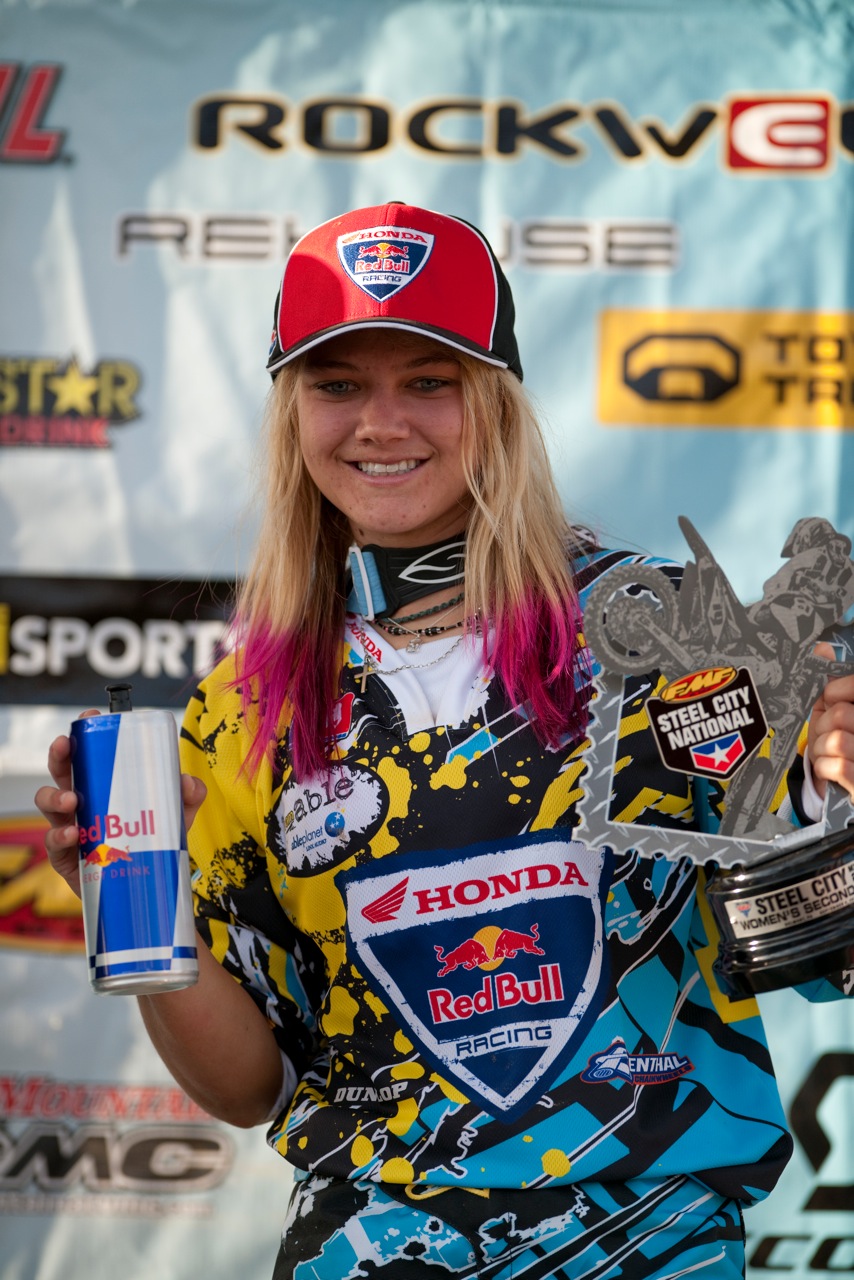 Ashley Fiolek is now 22 points out of the lead in the WMX championship.