FUNCHAL (PORTUGAL) – During the celebration of the eighth round of the Lucas Oil AMA Pro Motocross Championship, American team-manager Roger De Coster announced the line up of Team USA for the 64th edition of the Red Bull FIM Motocross of Nations set for the following September 26th weekend in Denver, USA. Ryan Dungey, Andrew Short and Trey Canard are the selected riders to defend the 20th Title obtained by the American team last year in Franciacorta. Mitch Payton of Pro Circuit was also named Assistant Team Manager to help Team USA to conquer the Chamberlain Trophy in 2010.

The announcement took place at Saturday's Unadilla National in New Berlin, New York, site of the 1987 Motocross of Nations. The three riders, as well as Team USA Manager Roger DeCoster and the AMA's Joe Bromley, stood atop Gravity Cavity for the presentation, which is one of the most famous obstacles in all of American motocross.

"These riders are fresh, fast and each is riding at the top of his game right now," said AMA Director of Racing Joe Bromley. " All three are ready to face the best of the rest. We are honored that they are representing the United States and the AMA at this prestigious event on American soil."

Roger De Coster is totally convinced with his team and he is confident that they will be able to revalidate the Title.
"I think they are going to be an awesome team, and they will be very strong, and I am also happy that the race is in the U.S. again. I hope that a lot of fans turn out to support the race and our team. It is a very special event and I look forward to a great weekend in Colorado," stated De Coster.

"There may be a little more pressure on our riders because the race is here at home but the riders say that they will try to take it like a normal race, but you can't help it once you get there, representing your country, it's a different story! I told that Dungey last year because it was his first one, and after the race he said, 'Wow, you are right, this is a very big deal!'

"These riders train really hard, they've had good seasons and I think they will work good together as a team," De Coster continued. "I'm happy with our team, and I hope our other American riders will come out and support the team, considering it is in their own country. It's centrally located. Denver is an easy airport to get in and out of, and it's a good track with great views for spectators. The fans should come out, and we should have a successful event. Hopefully, we can win it."

Rockstar Makita Suzuki’s Dungey, who made his debut in the Red Bull FIM Motocross of Nations last year in Franciacorta, will be the American Team Captain. Last year’s MX1 Class Winner will ride again in the same class and will try to lead his team to the highest step of the rostrum as he did last year after winning the final and crucial heat of the Nations. Dungey was proclaimed the 2010 FIM Supercross Champion and is the current leader of the Lucas Oil AMA Pro Motocross Championship with only four more rounds to go.

"I had an unbelievable experience last year in Italy," Dungey said. "Being a part of AMA Team USA is really an honor, you can count me in any time they call my name. This year is going to be another special one since we will be defending our home turf. Thunder Valley is a good layout for this type of event. The track is good and has elevation changes, big jumps and all that. It is just outside of Denver and close to a big airport, which I'm sure the international riders will appreciate. I think we're in for a really big turnout.

"They selected a good team, and I am honored to be captain with Trey and Andrew," Dungey added. "Trey's been winning and Andrew has been getting starts and leading early, which is huge at a race with this format. I like our chances in keeping the Cup here in the United States."

With a wide experience on the Motocross of Nations as a rider and also as team manager, De Coster will make Canard and Short debut in 64th edition of the Red Bull FIM Motocross of Nations. The Belgian has led the American team to the victory in 20 occasions and last year impressed everybody by bringing two rookies to the Nations, Dungey and Weimer. De Coster knows the pressure the riders have when representing their country and especially if they play at home.

"All of these riders have good personalities that will let them get along just fine, not try to impress anybody too much and do something stupid," De Coster said. "When you race in this event, the fact that you represent your country, a lot of people are going to come up to them and remind them about the history of the team and all the wins and how important it is to keep the thing going. It puts the pressure on, so the main thing for them is to ride within their abilities.

"Last year, with Ryan, I felt that he was riding to become one of the main guys in Italy, and I think his performance gave him the confidence to come back this year and start strong," continued De Coster. "I know that this event is important to him, and he will be doing everything he can to put the team in a winning position," he ended.

GEICO Powersports Honda’s Canard will represent his country with his 250 cc machine. The 19-year-old is experiencing an exceptional season in the National Motocross series, being now second in the Championship behind Christophe Pourcel – another one going to the Red Bull FIM Motocross of Nations with Team France.

"Growing up and reading about the Motocross of Nations in the magazines, I've always thought this would be an awesome experience," Canard said. "I was at the event in 2007 when Timmy Ferry, Ricky Carmichael and Ryan Villopoto were on the team, and seeing those guys win then was really cool.

"It's an honor to be a part of such a big event, let alone to represent our country like this. I will do my best to make the most of the opportunity and help my teammates to win this race once again—and win as a team. I've never been involved in an event like this, and I am very thankful that Roger and Team USA have given me this opportunity. I am definitely going to make the most of it," Canard ended.

For Honda Red Bull Racing's Short it is going to be a really special event, not only because he will represent his country for the first time at the Red Bull FIM Motocross of Nations, but also because he will do it in his home track in Thunder Valley, Colorado. Short is now second in the point standings of the National Motocross Championship behind his MXoN team mate Dungey.

When asked whom he expected the most pressure from, De Coster began with the French. "I think France will be very tough to beat. They were close last year and they take this event very seriously. They will have both Christophe Pourcel and Marvin Musquin on the team, and they are both very fast. Belgium is always a factor too, and then you have Italy. If they work out their problems and bring their best riders, they will be very good as well.

"There are a lot of teams that will be very fast, but I think we have a good chance, as always," added De Coster. "If something is going to beat us, it's going to probably stem from a problem, like a mechanical or a mass crash at the start. But we have a really good team, and I think we have as good a chance as anyone. I know that we have three riders that get along really well and they will work together as a team, which is very important at the Motocross of Nations."

While waiting for this 64th edition of the Red Bull FIM Motocross of Nations, the occasion marking the MXoN’s comeback to the USA after Budds Creek 2007, fans can pre-order their tickets at the race track Thunder Valley’s home page www.tvmx.net.

With 20 wins to their credit, USA is the most successful nation at this annual competition, followed by Great Britain with 16 wins and Belgium with 14. 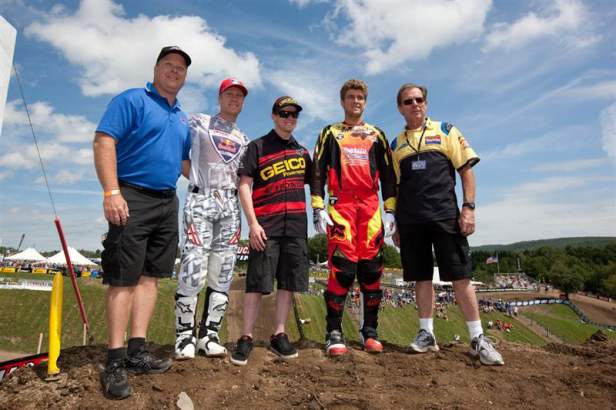