LONDON - Back in 2009 it was Nate Adams winning the event in London to secure the overall title on the Red Bull X-Fighters World Tour 2009. Twelve months later Adams is again one of the favorites to take victory in the former power station in the south of London, but the man from Arizona has not been able to win any of this season’s four stops in Mexico, Egypt, Russia and Spain and, as reigning champion, is under pressure to step it up in the British capital. Among his main rivals will be the winner of the classic event in Madrid’s Plaza de Toros de Las Ventas, Robbie Maddison. The Australian, who holds a host of world records and even jumped over the iconic London Tower Bridge in 2009, will be looking to continue his strong form to topple long-standing leader Andrè Villa from the top of the standings and claim his first ever Red Bull X-Fighters World Tour title. The Red Bull X-Fighters arena has a capacity of 30.000 -- which makes it one of the biggest temporary stadiums in the UK.

In 2009 the Red Bull X-Fighters rocked the enormous disused power station on the banks of the Thames, and this year the circus heads to the north side of the building to offer riders and fans alike more space. Joining the world’s FMX elite once again will be local hero Chris Birch. Since competing in the 2009 event, the Briton has left his base in Belgium for the sunnier climes of Spain, where he has been training with Villa and Thomas and Charles Pagès. The third-largest plant of its kind in Britain, Battersea Power Station played a key role in supplying several generations of Londoners with electricity from 1933 right through to 1989. Indeed, the towering 330-foot towers of the red brick building are today still among the most iconic landmarks of the British capital city. Since its closure as a power plant at the end of the 1980’s, Battersea Power Station has played host to exhibitions, events, concerts, and the Red Bull X-Fighters!

Going into the fifth stop of the season, the situation at the top of the Red Bull X-Fighters World Tour 2010 is incredibly close, with four different riders having claimed victory at the four events of the season in Mexico City (Villa), Giza (Adam Jones), Moscow (Levi Sherwood) and Madrid (Maddison). In London, any one of the top-six riders could take a huge step towards securing the 2010 overall title. 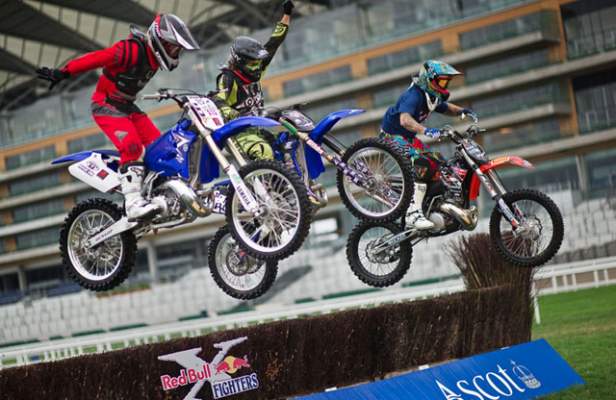