The 14-year old has amassed 54 amateur national championships to his credit. The NMA Grand National Championships were held on July 26-31 with young Webb winning titles in the 85/150 Stock 14-16, 85/150 Modified 14-16, 85/150 Open and 150 Four-Stroke divisions. Webb contested for two championships at the Amateur National Motocross Championships at Loretta Lynn’s Ranch held Aug. 2-7. In the Supermini 1 division Cooper won the championship winning two of the three motos. The Supermini 2 race was a battle that came down to Webb needing to win the final moto to take the title. With a 10 second lead on the final lap just seconds from the finish a lapped downed rider on the backside of a jump caused Webb to go down with several riders then landing on him. Webb pulled himself from the pile-up and finished the moto in third place earning the runner-up position for that title.

"Mitchell and I (Mitchell is the engine builder for JGRMX Engine Services) felt like we had some good settings for Cooper’s engine and gearing and he rode with heart and determination. We all felt terrible that he lost the second championship at Loretta’s that way but he rode like a champion all week," said Spencer Bloomer, JGRMX’s Research and Development Technician. "We spent a lot of time testing at our professional track in North Carolina getting Cooper’s suspension dialed in and it really worked out well at the race," added JGRMX Suspension Services suspension technician Tim Shutt.

Cooper’s amazing summer was recognized by the American Motorcyclists Association (AMA) who bestowed him the honor of Youth Motocross Rider of the Year. This award is given annually to one motocross rider under the age of 16 that the AMA feels is a standout. The award will be presented to Cooper at the AMA Racing Championship Banquet scheduled for Nov. 21 in Las Vegas, Nev.

JGRMX provides engine and suspension tuning services for riders of any recent make and model off-road motorcycle. JGRMX runs a suspension dynamometer cycle both before and after modifications showing a clear path toward the desired individualized goal of the rider. Learn more at jgrmx.com. 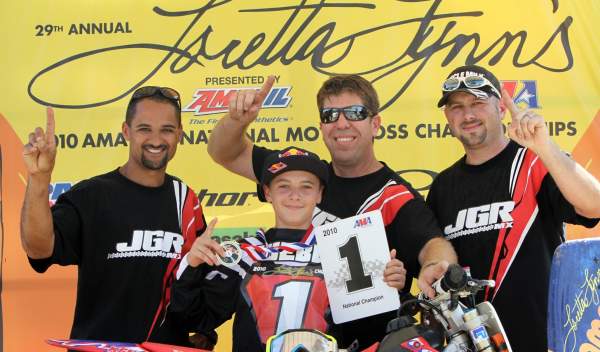