MORGANTOWN, W.Va. - The 29th Annual AMA Amateur National Motocross Championship presented by AMSOIL came to a close on Saturday afternoon at Loretta Lynn Ranch in Hurricane Mills, Tenn. After a solid week of racing, 35 class champions were crowned. They emerged victorious from 1,406 finalists, who in turn had emerged from an initial qualifying field of more than 20,000 amateur motocross athletes. Each championship class ran three long motos-some in scorching heat, others in muddy conditions-on a rough and complicated ranch track that is off-limits for motocross riders the other 51 weeks of the year.

The AMA Amateur National Motocross Championship finals have been organized since their 1982 founding by MX Sports. A list of past champions includes such superstars as Ricky Carmichael, Jeremy McGrath, Travis Pastrana, James Stewart, Kevin Windham, Ryan Dungey, and more.

Earning the 450 A class title along with the AMA's prestigious Horizon Award was Team Green Kawasaki rider Jason Anderson. The New Mexico-based rider won four of his six motos during the week; a DNF in the 250 A/Pro Sport class after winning the first two motos likely cost him the title there. That victory instead went to his teammate Zack Freeberg, leaving Anderson with one last chance to take a title in the 450 A class. After starting the moto with an astonishing three crashes on the first lap, Anderson settled down and worked his way up from last to fifth to clinch the championship. 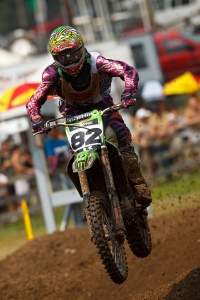 The two other A-class winners were Rockstar Suzuki teammates Gannon Audette and Ian Trettel. Audette, a Minnesota native who is now based in Cairo, Ga., topped the 450 A/Pro Sport division with a three-moto sweep, while the Florida-based Trettel topped the 250 A class with 2-1-1 moto scores. Winning the last two motos, Trettel topped Audette-the first-moto winner here-both times to take a title of his own.

As a testament to the competitiveness of the field, only two riders managed to take a pair of class wins: Team Green Kawasaki rider Justin Bogle (450 B Stock and 250 B Modified) and Suzuki rider Austin Forkner (85cc 9-11 Stock and Mod). Bogle, who hails from Oklahoma, was the only rider all week to go undefeated, sweeping all three motos in both of his classes and setting himself up as a top prospect in 2011.

Other B-class champions included California's Chris Plouffe (450 B Modified), Texan Brad Frace (250 B Stock) and another Californian, Tyler Bereman, in the College-Age (17-24) group. And in one of the best stories of the week, Vet +30 B/C rider David Jones took the title on a 2004 Kawasaki KX125 two-stroke motorcycle.

The AMA Vet Rider of the Year Award went to Massachusetts' Keith Johnson, who topped Kevin Walker to take the Vet +35 title. Walker in turn took his record-extending fourteenth Loretta Lynn's title in the Senior +40 class, as the Tennessean topped California's Doug Dubach. Dubach himself responded with the Senior +45 title on his DRD-backed Yamaha. The winner of the Masters +50 class was Monster Energy Kawasaki-backed Matt Tedder, the father of four young riders, two of whom are currently on the Lucas Oil AMA Pro Motocross Championship tour. 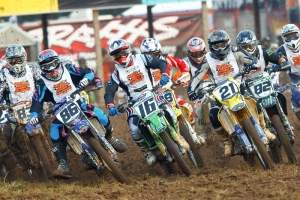 The minicycle divisions featured many interesting storylines. There was North Carolinian Cooper Webb's rise to the top on the Joe Gibbs Racing-powered Honda Red Bull Racing CRF150, giving the four-stroke a win in the highly competitive SuperMini 1 class-this after losing the SuperMini 2 class title with a last-lap gaffe that opened the door for the very fast Jace Owen to snatch up the title on his Rockstar Suzuki. There was also the emergence of Vermont's Dakota Alix to the national stage in the SuperMini classes, as well as the lost week of heavily-favored Adam Cianciarulo, who suffered crashes and DNFs on his Monster Energy Kawasakis and did not take a single moto win on the week. 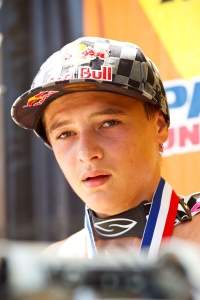 Cooper Webb was the top rider of the minicycle divisions this year.
Photo: Simon Cudby

In other 85cc racing, West Virginia's Steven Gretchen topped the 85cc (12-14) class on his American Suzuki-backed RM80, and Oregon's Christopher Allredge raced his Yamaha to the 85cc (12-14) Stock championship.

In the Women's classes, California's Alexah Pearson took home the title in the big-bike class, while Utah's Amanda Maheu topped the minicycle division.

For video recaps of the entire week of action from Loretta Lynn's, head over to MotorcycleUSA.com to watch the daily episodes of MX Sports Center, hosted by Jason Weigandt and Kevin Kelly.

For complete results, including the Junior minicycle and other amateur results, or for more information about dates and how to qualify for next year's event at Loretta Lynn's log on to www.mxsports.com.

AMA Amateur National Motocross Championships
Produced by MX Sports, Inc., the AMA National Motocross Championships is the world's largest amateur motocross race. Hosted annually since 1982 at the home of country music star Loretta Lynn in Hurricane Mills, Tenn., the event is the premier amateur motocross race in the world. Approximately 25,000 racers attempt to qualify in 33 classes for the 1,386 available gates at the finals. The National event, christened "The World's Greatest Motocross Vacation", is held the first week of August annually. As proof of the significance of winning an AMA Amateur National Championship title, most of today's top motocross and Supercross stars, including Ricky Carmichael, James Stewart, and Ryan Villopoto, won championships at Loretta Lynn's. For more information, please visit www.mxsports.com.

About MX Sports
MX Sports, Inc. is a Morgantown, West Virginia-based motocross production company. The group coordinates the AMA Amateur National Motocross Championships, which includes a national qualifying program consisting of 52 Area Qualifying races held annually from February through May and 12 Regional Championship races conducted in June at select motocross facilities across the country. Less than five percent of the Area Qualifier entries actually qualify for the national championship event, held during the first week of August at the home of country music star Loretta Lynn in Hurricane Mills, Tenn. For more information, please visit www.mxsports.com.