Unless you’ve been living under a rock, you know that Ryan Dungey is on a roll. The Rockstar/Makita Suzuki rider has won 12 of 16 motos, led 121 laps, and has taken the overall at every round except Hangtown. After Washougal, his lead has increased to 95 points over Andrew Short, and he’s well on his way to becoming the first racer ever to win both indoor and outdoor premier-class titles in his rookie year. But Dungey isn’t the only 450-class rookie that’s doing well. The division is in a transitional period right now; a time in which we are witnessing several young, speedy rookies stepping up to challenge some of the veterans of the class. Let’s take a moment to look at the performances of some of these rookies who have been putting in good, solid performances this year:

GEICO Powersports Honda’s Brett Metcalfe had a great race in Washougal, taking his third podium of the year via 3-5 moto finishes. It seems like Metcalfe is always near the front of the pack, so a 3-5 performance from him isn’t anything out of the ordinary. However, it’s important to note that Metcalfe started the second moto in 26th place and was forced to charge through the pack to get fifth. Had he finished just one spot back, he would have handed the podium over to Rockstar Energy Suzuki’s Tommy Hahn. Metcalfe’s overall finishes have been outside the top five just twice, and he currently sits third in the points, 16 points behind Andrew Short. 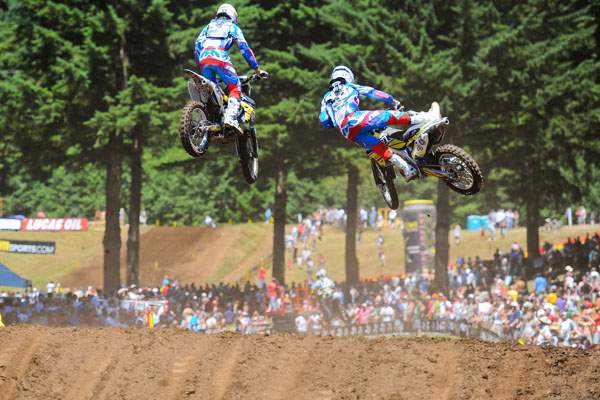 Ryan Sipes (right) scrubs past teammate Kyle Chisholm on his way to his best finish of the season.
Photo: Steve Cox

Ryan Sipes also put in a great ride at Washougal and notched a career-high sixth overall. In the first moto, Sipes charged to fifth after starting in 11th, and he finished 11th in the second after a tip-over on the start put him back in the pack. I talked to Sipes after the race, and it sounded like he really believes that he belongs in the top five. He qualified second fastest and set the second-fastest time of the first moto, so his speed is certainly there, and if he hadn’t had that little crash on the start, there’s a good chance he would’ve been in the top five. Sitting eighth in the points, his overall finishes have only been outside the top ten twice; something the MotoConcepts Yamaha guys have to feel good about.

Despite having a bit of a tumultuous season, Kyle Regal has been able to post some brilliant results. He went 6-2 for third at Freestone, and 8-2 for third at Spring Creek. In addition to that, he also has a sixth and a seventh. Unfortunately, he crashed in practice at Washougal and rung his bell hard enough to cause him to pull out of the race. Regal sits tenth in the points, and that’s pretty impressive when you consider that he’s only raced 6 of 8 rounds.

With eight motos left in the season, Metcalfe, Sipes and Regal all have time to move up in points. It’s going to be interesting to see how Dungey’s fellow rookies, and their competitors, finish out the season.