MORGANTOWN, W.Va. - The 2010 AMA Amateur National Motocross Championship from Loretta Lynn Ranch will once again return to Versus Network with HD coverage of the world's largest single motocross event. The show debuts on Thursday, September 23 at 5 p.m. ET with a re-air scheduled for Tuesday, September 28 at 5 p.m. ET.

"With so many classes and such a diverse group of competitors, it can be very challenging to produce a television show" said Event Director Tim Cotter. "With so many future stars of our sport, Racer TV does everything it can to capture all of the drama and excitement of this illustrious event. If something happens at the race, you can be sure Racer TV captured it and I think that is what has made the shows so popular." 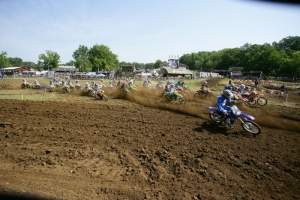 The nation's fastest amateurs and the world's biggest motocross event will once again be brought into millions of homes thanks to Versus.
Photo Courtesy Racer X

The half hour show is hosted by Jason Weigandt, the voice behind the Lucas Oil AMA Pro Motocross Championship telecasts on SPEED and NBC Sports in addition to the GNCC and ATV shows on Versus.

"I love having the opportunity to commentate at the pro events, but there is something special about Loretta Lynn's that I can't enough of," said Weigandt. "The summer camp feel, the buzz in the air and the all out effort every single amateur rider gives on the track. There is just nothing like the Amateur National Championship and it something you have to experience to believe it."

AMA Amateur National Motocross Championships
Produced by MX Sports, Inc., the AMA National Motocross Championships is the world's largest amateur motocross race. Hosted annually since 1982 at the home of country music star Loretta Lynn in Hurricane Mills, Tenn., the event is the premier amateur motocross race in the world. Approximately 25,000 racers attempt to qualify in 33 classes for the 1,386 available gates at the finals. The National event, christened "The World's Greatest Motocross Vacation", is held the first week of August annually. As proof of the significance of winning an AMA Amateur National Championship title, most of today's top motocross and Supercross stars, including Ricky Carmichael, James Stewart, and Ryan Villopoto, won championships at Loretta Lynn's. For more information, please visit www.mxsports.com.

About MX Sports
MX Sports, Inc. is a Morgantown, West Virginia-based motocross production company. The group coordinates the AMA Amateur National Motocross Championships, which includes a national qualifying program consisting of 52 Area Qualifying races held annually from February through May and 12 Regional Championship races conducted in June at select motocross facilities across the country. Less than five percent of the Area Qualifier entries actually qualify for the national championship event, held during the first week of August at the home of country music star Loretta Lynn in Hurricane Mills, Tenn. For more information, please visit www.mxsports.com.