Results Archive
GNCC
Burr Oak
Articles
Overall Results
Full Results
XC2 Pro Results
Full Results
Motocross of Nations
Articles
Nations Results
Full Results
Upcoming
GNCC
Buckwheat 100
Sat Oct 8
Articles
Upcoming
WSX
British GP
Sat Oct 8
Articles
Upcoming
Red Bull
Straight Rhythm
Sat Oct 15
Articles
Full Schedule
American Honda Announces 2011 Off-Road Models and ATVs
Torrance, CA: American Honda Motor Company’s Powersports Division announced to its dealers today an additional release of off-road models and ATVs for the 2011 model year. These Hondas include the CRF450R and CRF250R motocross machines, CRF70F and CRF50F off-road motorcycles, the FourTrax Rancher family of ATVs, and the sporty TRX250X.
"Honda is ramping up its release of 2011 models," said Powersports Press Manager Bill Savino. "We’re proud to unveil our newest race bikes, the CRF450R and CRF250R motocrossers, plus a wide assortment of Honda off-road machines that have remained extremely popular with recreational riders over the years. With these models for 2011 and more to follow, this is certainly going to be a great year for riding enthusiasts."
More detailed information and images of Honda’s model line can be found on www.powersports.honda.com or see your local Honda powersports dealer.
- The Class of the Open-Class MX Bikes: Honda CRF450R
Long regarded as the bike of choice in the big-bore motocross division, the 2011 CRF450R incorporates a host of improvements that will help this bike retain its standing as the yardstick by which all others in the class are compared. Various tweaks to the engine tuning broaden the already prodigious powerband—more low-end pull and midrange grunt—while also enhancing throttle response via a new throttle body.
In addition, revised suspension linkage and settings yield improved control, increased ride plushness and enhanced rear-wheel traction. A new Honda Progressive Steering Damper (HPSD) with a larger damper piston (24mm versus 20mm) produces even better tracking traits than before. In addition, the CRF450R now features a newly designed muffler that meets the sound levels of 94 decibels required by some racing organizations in 2011, making it competition-legal right off the showroom floor. All this and more make the 2011 CRF450R a shoo-in to maintain its dominant role among open-class MX bikes. MSRP $8,199. Available in Red beginning October 2010. 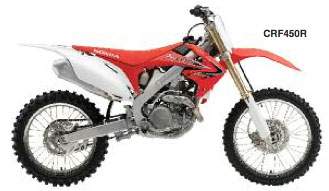 - The Award-Winning Honda CRF250R Gets Better Yet in 2011
Despite winning numerous comparison tests and awards in 2010, the CRF250R enters the new season sporting a number of improvements that will help it continue its winning ways. A new Honda Progressive Steering Damper (HPSD) with a larger, 24mm damper piston aids tracking precision, and new suspension settings front and rear help give this stellar-handling machine even better chassis balance for 2011. Changes to engine tuning now give the CRF250R a stronger bottom-end and midrange hit, and this 2011 model features a new muffler that meets sound levels of 94 dB required by some racing organizations. MSRP $7,199. Available in Red beginning October 2010. 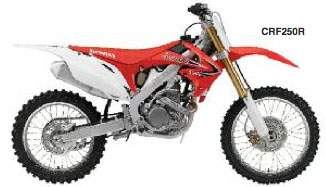 - Family-Friendly CRF70F and CRF50F Return in 2011
In a completely different segment within the vast Honda spectrum, the family-friendly CRF70F and CRF50F return to the lineup in 2011. Featuring an automatic clutch, low seat height and a three-speed transmission, the CRF70F has long served as a practically perfect choice for beginning riders. Credit too the torquey 72cc air-cooled single-cylinder four-stroke engine that has grown to near-legendary status for reliability over the years. Likewise, for more than 40 years the CRF50F has introduced legions of riders the world over to the sport of motorcycling. It tips the scales at an unintimidating 110 pounds and the little CRF50F boasts a tough 49cc air-cooled single-cylinder four-stroke engine renown for its durability plus an ultra-low seat height, automatic clutch, three-speed transmission and an inverted fork. Both of these machines represent the fun that turns the dreams of beginning riders into trail-time reality. CRF50F MSRP $1,499; CRF70F $1,899. Both models available in Red beginning October 2010.
- Options, Options and More Options: FourTrax Rancher Family
Year after year, more and more ATV riders come to sing the praises of the ready-and-willing FourTrax® Rancher®—and for good cause. This family of full-sized machines, assembled at Honda’s plant in Timmonsville, SC, has proven many times over to be the most dependable partner you could ever hope for, whether the day calls for work or fun. At the heart of each Rancher beats a powerful liquid-cooled, fuel-injected 420cc engine with convenient electric starting and plenty of grunt for getting the toughest jobs done. From there, it’s a matter of choosing the features that best fit your riding needs, conditions and desires.
Many Rancher fans swear by the base model FourTrax Rancher with its automatic clutch and manual-shift five-speed transmission with reverse because it’s such a workhorse. Other owners are equally enamored of the FourTrax Rancher ES with its remarkable Electric Shift Program (ESP®) that shifts with consummate ease with the touch of a handlebar-mounted button. Others will allow that while these two-wheel-drive Ranchers are great, the addition of the four-wheel-drive option found in the manual-shift FourTrax Rancher 4x4 and the ESP-equipped FourTrax Rancher 4x4 ES with their easy-to use TraxLok® 4WD/2WD selector makes a good thing even better. And then there are those who love to opt for the top-tier models, and in this case that would be the automatic-transmission 4x4 FourTrax Rancher AT and FourTrax Rancher AT with Electric Power Steering. Both of these upscale models feature five-speed auto-shifting or push-button ESP shifting, plus four-wheel disc brakes and independent rear suspension.
That’s a lot of variations on one great theme, but no matter which model you select you’ll see why Honda’s FourTrax Rancher has long remained a favorite. MSRP TBD. Two-wheel drive models available in Red and Olive; available early 2011. 4x4 models available in Red, Olive and Camo; available December 2010.
- The TRX250X Offers Full-Sized Fun
In the sport ATV category, the TRX250X delivers full-sized ergonomics and it’s also full of great features including electric starting and Honda’s innovative SportClutch™ that enables the rider to experience manual clutch actuation with the advantage of no stalling. That makes it easy to enjoy the plentiful power on tap and the five-speed transmission plus reverse for day-long adventuring. It’s no wonder that the sporty and fun-to-ride TRX250X continues to stand out as a favorite among beginners as well as longtime riders, year after year. MSRP TBD. Available in Red and Black beginning September 2010.
©2010 American Honda Motor Co., Inc. All Rights Reserved.
Read Now
November 2022 Issue Now Available