The circuit of Horensbergdam in Genk is the venue of the fifth edition of the ‘Everts & Friends Charity Race’. This unique motocross event will take place July 21, National Day of Belgium. As the event’s name indicates, all profits will go to charity (see below).

Stefan Everts, tenfold World Champion and currently Race Director for KTM, takes on the challenge with his colleagues from MX1 and MX2 classes for this event exclusively. Another star guest is of course two-fold World Champion Sébastien Tortelli, taking a short leave from his US-based ‘ChampFactory Motocross School’ and flying over for this occasion. Tortelli’s presence offers a rare opportunity to see him in action again and many fans undoubtedly will not have forgotten his 1998 MX2 World title after a heroic battle with Everts in Megalopolis (Greece).

Confirmations of other GP stars for the ‘Everts & Friends Charity Race’  are expected in due time. Five-fold World Champion Joël Smets and three-fold Dakar Winner Cyril Despres have already agreed to compete in the ‘GP Stars’ series at the Horensbergdam. And not to be missed: multiple cyclocross champion Sven Nys  takes up the motorcross challenge!

Current MX 1 World Champion Antonio Cairoli has also confirmed his presence but will decide on the spot upon his taking part in the races.

Don’t miss the unmissable and witness the Everts-Tortelli clash one more time. The rest of the line-up is no less: you will find absolute joy in the afternoon races of the ‘Ladies’, Future Stars’ (85cc), ‘GP Stars’ (MX1/MX2) and ‘Golden Heroes’ (oldtimers). Need more details? The following line-up will convince you!

FUTURE STARS VS. GP STARS: Two series in which GP Stars (MX1/MX2) start from the second row, behind the young ‘Future Stars’. All participants are obliged to ride a 85cc bike.

LADIES CHASE: A clash between GP Stars and the Ladies. The MX1 and MX2 riders. The Ladies start with one round ahead and it is up to the GP Stars to chase the ladies!

WRONG WAY PITSTOP RACE: Another round of ‘tug of war’ between the ‘Ladies’ and the ‘GP Stars’ (who start from the second row). This time, they ride the racing circuit in the opposite direction. In addition, the GP Stars have to make a pitstop during which they have to change the rear tire.

AMERICAN RACE OR AMERICANO: An exciting knock-out race for the ‘GP Stars’. After each round, the last two or three riders are knocked out. Ultimately, two surviving Stars battle for the win in two final rounds.

GOLDEN HEROES: Two ‘classic’ series, twelve minutes + 1 round each in which the ‘Golden Heroes’ battle each other on oldtimer bikes.

Liam, Stefan’s five-year old son and a skilful BMX-rider already, will ‘showcase’ his promising talent on his little PW-bike. Together with his friends he will race a few rounds on a mini-circuit in and around the starting zone during the break.

In addition to the fun on the race circuit, there will also be lots to discover on the rest of the grounds.  The paddock and teamtrucks will be conveniently arranged in U-shape, there is a kids area (bouncy castle, trampolines, grime…) and a huge ‘fan party’ in the party tent. The Freestyle ‘FMX4ever’ Team of Jimmy Verburgh will display some more high air fun in between and after the races. And last but not least: a signing session with the World Championship’s Stars will be held during the break.

Praga Khan’s icon Maurice Engelen composed a song for ‘Everts & Friends’ that will blow you out of your socks. This song, with stirring beats, will be played through all the loud-speakers just before the start of each race.

The winner of the ‘Future Stars’ class receives the Stefan Everts trophy, a stone-carved replica of ‘The Legend’s’ last air cooled engine, fully equipped with kickstarter and spark plug.

Joël Robert, Sylvain Geboers and Harry Everts – together totalling ten World Championship titles – will most exclusively mount their vehicles one more time for a lap of honour.

In line with previous editions, all profits made by the ‘Everts & Friends Charity Race’ will be donated to charity projects. These are selected by Stefan Everts and focus mainly on children and youth: ‘Een Hart voor Limburg’ (Koning Boudewijnstichting), ‘Make a Wish’, ‘Ter Heide’ (care centre for people with a serious or multiple mental disability) and Fondatioun Kriibskrank Kanner (a Luxemburgian/Belgian child cancer foundation). A number of these children and youth will attend to the event in Genk. They will enjoy full attention of Mediclowns in a specially equipped VIP-lounge.

To raise extra funds, exclusive ‘Everts & Friends’ t-shirts will be sold (via www.evertsandfriends.be and on the most important BMB motocross races) and the 85cc motorbike of Stefan Everts will be sold by auction during the event’s day. 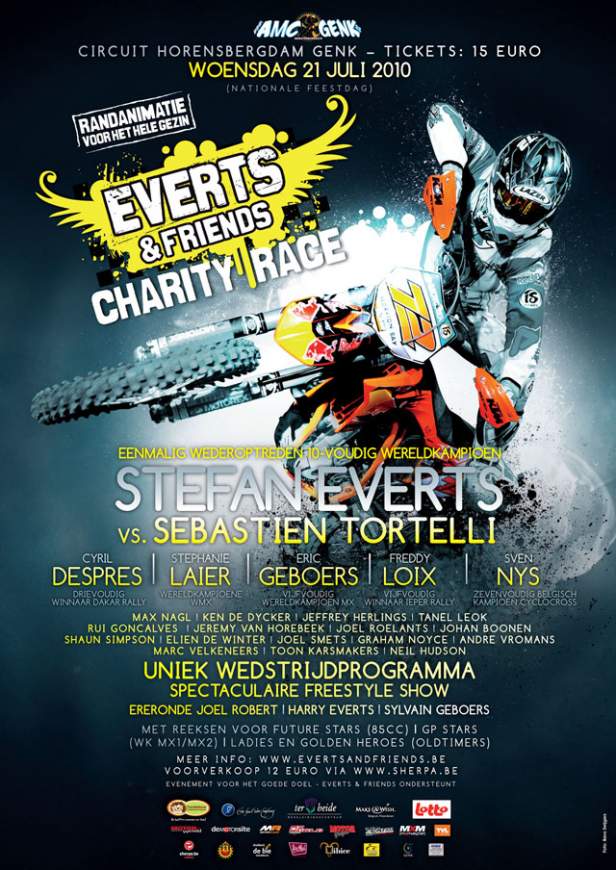