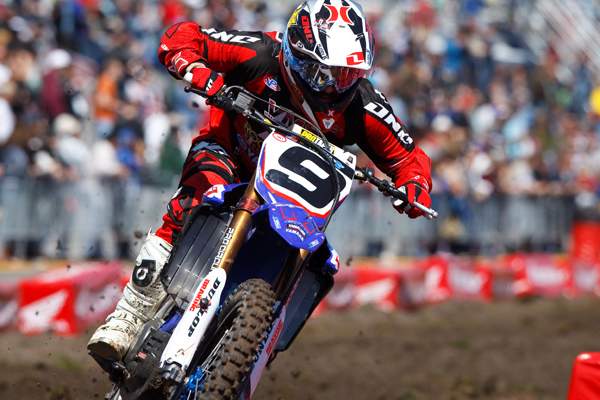 photo: Simon Cudby
Have you been watching the nationals, and if so, what do you think?
I haven’t watched all of them on TV. I’ve watched a few of them. I went Hangtown. I went to the fist round and watched in person. The class is pretty deep and there are a lot of good guys, but it seems like nobody is really putting it together week in and week out, and moto after moto, other than Dungey. I think they’re making it easy on him right now. Some guys have challenged him but have really been inconsistent. Different guys have challenged him and won some motos, but nobody has been able to give him a challenge week in and week out. He’s kind of on cruise control right now.
Chad Reed came out swinging at the opener at Hangtown and has sort of let things get away from him. What’s your take on that?
Yeah, at that first race, he looked like he was ready to go. In that first moto, he got the holeshot and was gone. It was easy for him. Since then, he hasn’t really been the same guy. I don’t know what’s going on. I know he’s got it in him. He’s won plenty of championships. I’m sure he’ll figure it out, hopefully sooner than later. The class has a lot of contenders in there, but like I said before, I just think nobody has been able to be a title contender other than Dungey, basically, and I think they are making it easy for him.
The master plan sounds like you will be back for Millville, the national after Red Bud. True?
Yeah, that’s the plan. That’ll give me another two weeks on the bike. That’s the plan as of now. As along as everything stays on schedule, I’m there. I feel like my riding is going really well and I feel like my fitness is coming back pretty quick.
Do you think you can run up front with the guys right away, or do you think you’ll have to warm into it?
I think I can. I wouldn’t race until I felt that I was ready to be a contender and be up front. I probably could have raced last week or even this weekend. I think this extra two weeks will help me out. I think by Millville, as long as everything stays on schedule, I should be ready to come out swinging and be a front runner.
If Millville falls into place, you’ll be able to run six nationals. What are you goals for these races? Podiums?
Yeah, I mean, that’s my goal. I would like to get up on the box my first race out. That’s my goal first race out. I want to be up front, not midpack. I need to make things happen.
Read Now
November 2022 Issue Now Available