MORGANTOWN, W.V.  - The first quarter of the 2010 Lucas Oil AMA Pro Motocross Championship wrapped up last weekend from High Point Raceway and after over two hours of demanding on-track action in which the fastest riders on the planet battled bar-to-bar for the win, a shift in both the 450 and 250 Class championships occurred. With some of the most competitive racing in recent memory sure to bring fans to their feet, the series returns to Southern Maryland for the annual MotoTees.com Budds Creek National, this Saturday, June 19 from Budds Creek MX Park in Mechanicsville.

Last Saturday's East Coast debut at the Rockstar Energy High Point National was Rockstar/Makita Suzuki rider Ryan Dungey's chance to show that despite being a rookie, he is fully prepared to take control of the premier 450 Class title fight. The reigning AMA Supercross champion continued where he left off at Freestone Raceway two weeks ago by sweeping both motos for the second consecutive race, but what was arguably the most notable moment of the event was his performance in the second moto in which he overcame Honda Red Bull Racing rider Andrew Short's near 10-second lead to take over the top spot. With the win, Dungey moved into first place in the standings and holds a 25-point lead over GEICO Powersports Honda's Brett Metcalfe. 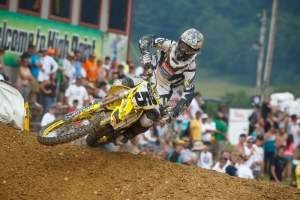 Equally as surprising was the trouble that found defending 450 Class champion Chad Reed. After another strong, consistent outing at Freestone, Reed looked prime to possibly back up his 2009 win at High Point. However, after a rock hit his goggles and broke the lens, Reed endured to take 13th in the opening moto only to suffer a broken brake rotor in his effort to bounce back in moto two, ending his day early. His 18th-place effort has dropped him to fourth in the standings and means a tough road lies ahead as he attempts to climb back to the top.

The ultra-exciting 250 Class still has yet to produce a repeat winner in 2010 after three rounds. On Saturday, former FIM World Champion Tyla Rattray savored his first taste of an overall victory on American soil when he relied on a pair of consistent runner-up moto finishes to capture the win for Monster Energy/Pro Circuit/Kawasaki. After an up and down first season in the states last year, Rattray has posted second and first place results the last two weeks and appears to be fully acclimated to the tracks and competition and ready to challenge his teammate Christophe Pourcel for the title. The ever-consistent Frenchman Pourcel has a firm, 27-point advantage over Rattray in the 250 Class standings thanks to a runner-up effort at High Point, but has only three moto wins so far in 2010. In the remaining three motos, three different riders have stood atop the podium in Rattray and GEICO Powersports Honda's Eli Tomac and Justin Barcia. The competition is greater than ever in the class and its unpredictable nature has produced exciting results so far this season. 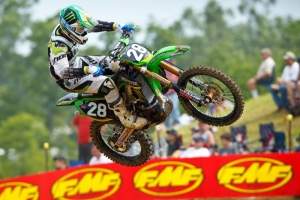 Budds Creek is one of the most legendary tracks on the Lucas Oil AMA Pro Motocross Championship schedule. In the shadow of the nation's capital, it is a favorite amongst riders and fans alike, the facility has a storied past and has produced some of the most memorable American motocross memories in history, including last year's outstanding final 250 Class moto in a torrential rain storm.

The biggest change surrounding the MotoTees.com Budds Creek National this season is the change in date. Traditionally one of the closing rounds during the second half of the 12-race schedule, Budds Creek moves to round four in the middle of June. Track promoter Jonathan Beasley has laid out a track that is very challenging, with several elevation changes, technical obstacles and multiple racing lines. This weekend's race will begin the next chapter in what has been an outstanding 2010 season.

The MotoTees.com Budds Creek National kicks-off at 1 p.m. EST on Saturday, June 19. Broadcast coverage of both the 450 and 250 classes can be seen same-day with back-to-back shows on SPEED, starting with the 250 Class at 8 p.m. EST and the 450 Class at 9 p.m. EST. As always, live internet stream of the first motos of both classes can be seen at www.allisports.com.