The High Point MX National is a staple in the Lucas Oil AMA Pro Motocross Championship, and there’s a reason: the fans. Even though the forecast was calling for rain, the fans still came out and sat through two pretty brutal rain bursts during the day, and they largely held out.

What the fans witnessed was a display of skill, speed and fitness, in the 450cc class by reigning 450cc Supercross champ Ryan Dungey of the Rockstar/Makita Suzuki team. And in the 250cc class, the fans witnessed riders tackling some very diverse conditions, and as would be expected, consistency paid off.

Muscle Milk/JGR/Toyota Yamaha’s Josh Grant grabbed the start at the beginning of the first 450cc moto, and for a while it looked like he was going to be able to hold on for the win, but Dungey caught fire late in the moto and chased Grant down, passing him on the 10th lap of 16 for the lead. From there, Dungey quickly made a break for it, while Grant appeared to settle for second in front of Honda Red Bull Racing’s Andrew Short. 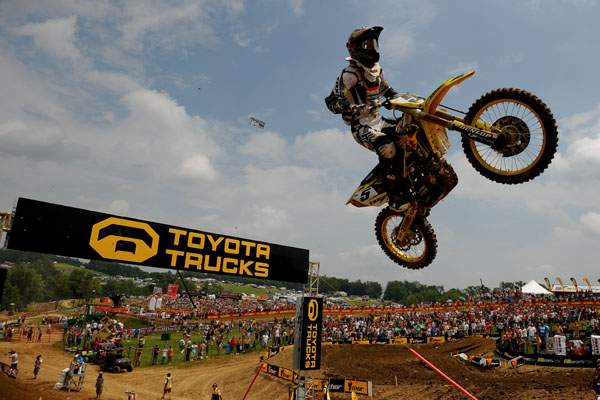 Ryan Dungey took off with yet another 1-1 performance at High Point. He now leads the points.
Steve Cox Photo

The only racer who really made any headway in the moto was TLD/Lucas Oil Honda’s Ben Townley, who started the race at the tail end of the top five, had a fall, then worked his way up from seventh back into fourth. Behind him came Motoconcepts Yamaha’s Matt Goerke, then GEICO Powersports Honda’s Brett Metcalfe, and then Jagermeister KTM’s Mike Alessi, who actually started fourth.

Defending champ Chad Reed, of the Monster Energy Kawasaki team, finished 12th after reportedly having a rock knock his goggle lens out.

In the second moto, Short grabbed the holeshot, and he began to pull away right off the bat from Alessi, Grant, MCRMX’s Ryan Sipes, Dungey, Metcalfe and the rest of the field. Reed made contact with another rider in the first turn and had his front brake caliper broken off. He worked his way forward from 16th to as high as 12th in the first four laps before dropping out of the race.

Short led the moto and looked like he may be close to getting his first 450cc moto win, but Dungey worked his way through the field until, on lap five, he grabbed second. Over the next five laps, he chipped away at Short’s lead, and he made the pass stick on lap 10, then quickly pulled away.

Dungey took the win – now four in a row – and the overall, while Short finished second just in front of Metcalfe, who came through from sixth to third.

Short was second overall, while Metcalfe was third.

With the win, and Reed’s misfortunes, Dungey now leads the championship with 126 points over Metcalfe on 101, then Alessi on 98, Reed with 95, and Townley with 87.

In Texas, Monster Energy/Pro Circuit Kawasaki’s Christophe Pourcel didn’t have great starts. At High Point, he did. The rain had begun to fall at the start of the first 250cc moto, and Pourcel took the holeshot, but trouble on the second lap handed the lead to GEICO Powersports Honda’s Justin Barcia, who then led Pourcel’s teammate Tyla Rattray, FMF KTM’s Tommy Searle, Pourcel and his teammate Jake Weimer. 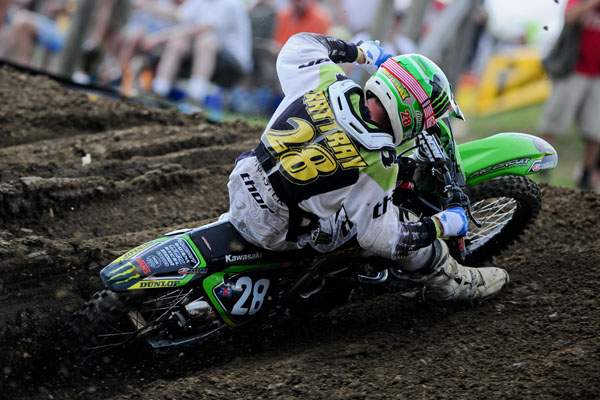 Barcia put on a clinic. He went out and dominated the opening moto going away in the slop – which was drying out by the end of the moto – while Rattray hung on for second in front of Rockstar Energy Suzuki’s Blake Baggett, Pourcel and Dean Wilson. Then came Searle and Weimer, both of whom fell during the course of the moto.

Pourcel nailed the second-moto holeshot as well, but this time he made it stick – even doubling the famous Tunnel Jump on the opening lap and immediately putting time on Wilson, DNA Shred Stix/Star Racing Yamaha’s Martin Davalos, Rattray, Davalos’ teammate Nico Izzi, GEICO Powersports Honda’s Blake Wharton and the rest of the field.

Over the first few laps, Rattray chased down Wilson, who fell and handed second to Rattray. Wharton eventually worked his way into third, just in front of his teammate Trey Canard, who amazingly finished the first lap in 21st and climbed through the field to fourth. Fifth went to Broc Tickle over Wilson, Davalos, Wil Hahn, Baggett and the rest of the field.

With his 2-2 finish, Rattray won his first-ever AMA overall over Pourcel and Wharton.