Abingdon, VA - AG Motorsports is pleased to announce the addition of #175 Phil Nicoletti to the Dragon Racing Fuels/1-866-KTM-PART 250 Motocross Team. Phil will be joining the team beginning at High Point this weekend and race the remainder of the 2010 Lucas Oil AMA Pro Motocross Championship series flying the Team Dragon Racing Fuels/1-866-KTM-PARTS banner. 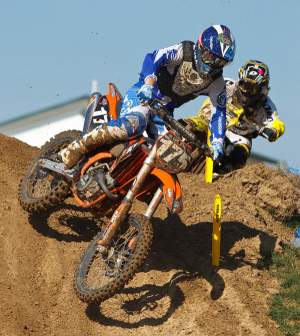 “I am excited that Phil has stepped in for our team. I ran into Phil at the GP at Glen Helen... and we discussed the team and Taylor (Futrell) being out until the last four rounds... Phil was explaining that he was in need of some assistance, so one thing led to another and we were able to join forces...” said Al Albiker, Partner/Team Manager of Team Dragon Racing Fuels.

Phil was a privateer at the beginning of the 2010 Supercross Series contesting the West Coast Lites Division and filled in for the injured Tommy Searle for the last three rounds. Phil finished the West Coast Lites campaign 8th overall in the point standings. “I know that Phil has been working hard and hopefully we can help him better his program. I think that when Taylor (Futrell) comes back, we will have a strong team...” said Albiker.

Phil has been supported by St. Lawrence Radiology and Dr. Maresca over the last 3 years and said he could not have gotten this far without their help. On the track, Phil has been fine tuning his skills with Mike Alessi over the last few months and is eager to continue to strengthen his program with the help of Albiker and the entire Team Dragon Racing Fuels/1-866-KTM-PARTS staff. “I am excited to have the extra support for the rest of the Nationals and it will make my life as a privateer much easier...” said Nicoletti.