In his home race this past weekend in Freestone, privateer Kyle Regal turned some heads with a second-moto second-place finish and third overall in the 450cc class. We thought he was a good fit for "Privateer of the Week."

Racer X: Your race at Hangtown wasn’t outstanding, but you obviously did really, really well in Texas. Talk a little bit about the difference between the two weeks for you.
Kyle Regal: It was just the first race on the bike with Merge Racing at Hangtown, and I didn’t feel very comfortable in practice or in the first moto. In the second moto, it kind of came around a little bit, but then I had two weeks off and I really trained hard and we got the bike set up a little bit better, and my starts were dialed at Freestone. I think I was like third or fourth in the first moto, and I didn’t ride so well and fell way back to like eighth or ninth, and then I just rode super-tight and loosened up toward the end of the moto and got like sixth. Then, we changed a few things on the bike – different tires – and I just came out swinging and tried to stay consistent through the whole moto, and I passed a couple guys there at the end for third place overall. On my end, I was pretty pumped. I think I rode pretty well that moto.

One of the guys you passed late in that moto was the defending AMA National Champion, Chad Reed. You don’t see privateers passing the defending champ basically ever...
Yeah, it was kind of cool. I think he was struggling with his lines, and I think I passed him on like lap two or three, and then I think he was behind me for a while. I messed up once in the sand, and then he got me back, and he got back in front of me, then I just tried a couple of different lines to try and gain some time on the track, and after I found some more lines, I made the pass again and just kept moving forward there at the end. I got [Andrew] Short, then I got Metty [Brett Metcalfe] toward the end, and the last couple of laps, I was kind of by myself. It was fun, for sure, and a little bit surprising. I’ve ridden that track a couple of times this year, so I felt really comfortable out there.

What about the heat? Does it make it easier to deal with it since you’re from there?
It’s not so bad when you’re out there, it’s just that as soon as you either get done, or right there when there are only like two laps left, then you start really thinking about it. Lately, though, I’ve been training really hard with my friend down from Michigan – he’s really into training outside, so we’ve been doing that a lot. His name’s Timmy. We’ve been road-biking and running a lot, and we’ve been doing a lot of mountain biking, and it’s a lot like moto, so I like it. You just train really hard and put in your time on the track and you’ll get used to it.
{LINKS}

It’s frequently a problem with younger riders that they begin to think about names on jerseys around them, so they won’t pass an established factory rider just because they don’t think they should be able to. How do you overcome that?
The names don’t really get to me, but it’s tough for me when I get passed, because usually I don’t get good starts – and that’s what I struggled with in the first moto, when I rode real tight – but the second moto, I just went back to the basics and kind of just raced the track, and whatever happened is what happened. I ride with a lot of fast guys here at my house – like I rode all winter long with Chad Johnson – so the name doesn’t really get to me, it’s just racing. It’s all racing. 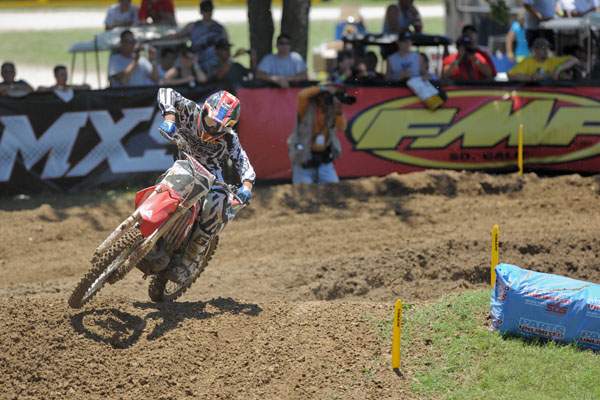 You haven’t raced at a lot of the tracks we’ll be heading to coming up, so what do you think about some of these upcoming weeks?
I’ve raced High Point, I did well at Budds Creek last year – went 4-4 for fourth overall, so I was pretty pumped on that – and then I think we go to Thunder Valley, and I haven’t been there, but then there’s RedBud, and that’s where I am from originally, back in Michigan. It didn’t go so well there last year – I ran out of gas – but that’s probably one of my favorite tracks out there. RedBud is great. I’ve got a lot of fans up there, and all my family lives up there, so it should be a good race.

What’s it like going from the Yamaha to the Honda, both of which are very different from the other 450s in the class?
It wasn’t bad. When I switched, we just went straight for the suspension, and Merge Racing was fortunate enough to give me a chance again to ride for them, so we sat out here for two or three weeks just trying to get the suspension dialed, and I personally believe it’s really good now. I feel really comfortable on it. Same with the motor. I believe we’ve got the bike really dialed, and I think me being comfortable on the bike has a lot to do with my success. I don’t know, I just feel real comfortable, and I want to keep the ball rolling for the rest of the races.

Do you feel you’re not at any sort of a disadvantage to the guys who are on teams and stuff?
Maybe a little bit because they get to fly in the day before, compared to me, where I think I’m a little bit disadvantaged there driving to the race in the Sprinter van. It’s a little tougher at the race, but once you’re on the line, it’s all the same once you’re out there if you’re giving it your all. Everybody’s at the same level, then, I think.

Well, you beat all of their riders in Texas, so do you pay attention to that?
I’m just out there doing my own thing. The guys in front of me? I’m going to try and pass them. I just want to keep fighting all the way to the end, and the guys you beat are the guys you beat. It’s okay if you just know after you crossed the finish line and you look back that you gave it your all. That’s what I’m trying to do. I just want to do my best for me and all my sponsors, and the results will speak for themselves. I feel comfortable here. Even if a team wanted me to come ride for them [this summer], I think I’d just stay because I’ve done a lot of bouncing around in the last year. Change is good sometimes, but too much of it can wear on you, so I’m just going to hang out where I’m at and just put in the best results that I can.

Who would you like to thank?
First, I want to thank my step-dad Mark – he’s a big part of my success, especially when it comes to my program. A lot of guys rag on him, but every day he’s out at the track telling me where I can improve. Also, my mechanic Dylan’s out there with the board every lap, and Jim Lewis from Merge Racing really helped my bike get dialed in, with both the suspension and the motor. American Honda jumped on a couple of weeks before the outdoors, so I’m really stoked that they gave me support. Hedgie from Oakley is one of my closest friends, and he got me hooked up with Terry Baisley at Western Powersports, so that was a big help. Then, I want to thank Fly Racing, Pirelli, FMF, JoJo Clothing, Renthal, Sunstar, QTM, Brembo, AC Racing, N-Style, Arai, Gaerne, Acerbis, Motion Pro, Twin Air, and my trainer Stephanie at Complete Fitness.