MORGANTOWN, W.V. - With two rounds of the 2010 Lucas Oil AMA Pro Motocross Championship in the books, four different faces have stood atop the overall podium in both the 450 and 250 classes. While Monster Energy Kawasaki's Chad Reed and French import Christophe Pourcel lead the way in the standings, respectively, the competition throughout the field is heating up as the series heads east for the first time this season with the Rockstar Energy High Point National this Saturday, June 12, for one of the most popular and important rounds of the entire championship.

Last weekend's Flagstar Bank Freestone National from Texas was a test of endurance and the will to survive as high temperatures pushed riders to their limit. The 450 Class was dominated by Rockstar/Makita Suzuki's Ryan Dungey, who overcame a rough start at Hangtown to post perfect 1-1 moto scores in dominating fashion. As a result, the rookie moved into second place in the standings and asserted himself as a contender for the premier class championship. The reigning series champion Reed followed with second overall while Merge Racing Honda's Kyle Regal, a true privateer, captured his first career podium in front of his hometown fans in third. 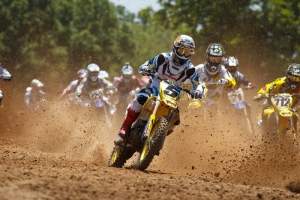 Ryan Dungey was the class of the 450 field in Texas and looks to carry the momentum into High Point.
Courtesy Simon Cudby

The 250 Class was a showcase of young talent as Pourcel, his Monster Energy/Pro Circuit/Kawasaki teammates Dean Wilson and Tyla Rattray, as well as GEICO Powersports Honda's Eli Tomac, all found their way to the front of the highly-competitive field. When all was said and done, it was Pourcel whose survival tactics and smart racing paid off in the end with his first win of the young 2010 season. Following him onto the podium was a Pro Circuit sweep with Rattray in the runner-up spot and Wilson rounding out the overall podium for the first time in his career in third. For Wilson, the success was somewhat bittersweet as the overall win would have been his had he not made an error in judgment while leading on the last lap of the final moto. 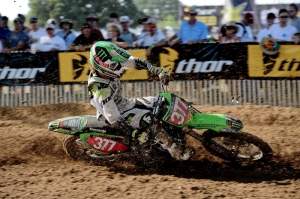 A litte good fortune helped Christophe Pourcel capture his first win of the season and he hopes to go back-to-back at High Point on Saturday.
Courtesy Steve Cox

High Point Raceway is an historic part of the Lucas Oil AMA Pro Motocross Championship schedule. Since hosting its first race in 1976, the facility has become a staple of American motocross and has produced some of the most memorable races throughout the illustrious history of the outdoor nationals. Last season, the current points leaders in each of the respective classes-Reed and Pourcel-were virtually untouchable en route to claiming victory, both claiming flawless 1-1 moto performances. For Reed, it was his first career 450 Class victory and sparked his run to the 2009 premier class title. Pourcel's nearly perfect day served as a coming out party for the Frenchman, who gave notice to his competitors and the fans in the U.S. that he would become a regular at the front of the field.

MX Sports is once again pulling out all the stops in the development of the layout for 2010 and the thousands of East Coast enthusiasts can count on seeing the intense air time and ever-changing track conditions that have helped High Point Raceway become a favorite amongst riders and fans alike. With track architect Marc Peters of Petersbuilt Motocross Tracks leading the grounds crew, fans will see more spectacular racing than ever before on one of the sport's most popular circuits.

Gates drop on the Rockstar Energy High Point National this Saturday, June 12, beginning at 1 p.m. EST. Live coverage of the first motos of the 450 and 250 classes can all be seen on live-stream at www.allisports.com.