For the first Grand Prix in the USA in the MX1/MX2 era and the first of five set to take place in San Bernardino Red Bull KTM’s Tony Cairoli and Jagermeister KTM’s Mike Alessi enacted a lucid battle of the 350SX-Fs under blue skies and high 80s temperatures. Cairoli and Troy Lee Designs Lucas Oils Honda’s Ben Townley ran out moto winners in the MX1 class with the overall podium belonging to the mercurial Sicilian ahead of Alessi and Rockstar Teka Suzuki’s Clement Desalle.

There were a number of themes, elements and issues that cropped up during the weekend that was attended by a sparse crowd but the objective of this meeting - confirmed just a month ago - was obviously not to generate a blockbuster sell-out, rather to re-introduce Grand Prix racing with its sheen, talent and tradition to US shores and hopefully ignite interest. 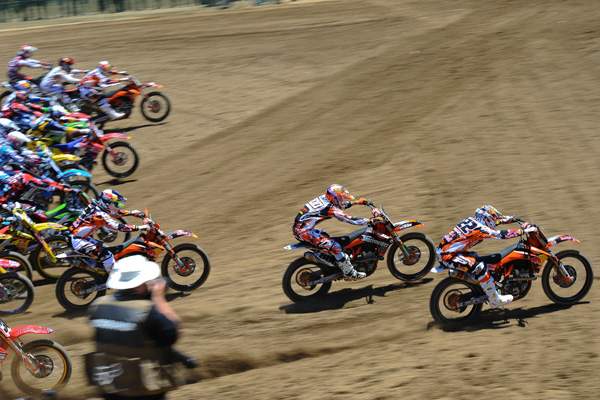 Antonio Cairoli (222) leads Mike Alessi (800) and the rest of the field off the line for moto one.
Steve Cox Photo

The Glen Helen lay-out gave the GP regulars their longest and fastest laps of the season; around twenty seconds more and sometimes up to 17kmph quicker than typical averages. Strong winds on Saturday caused the vast majority of the newcomers to miss vital acclimatisation and bike set-up mileage and the desert air provided the hottest climate of the year so far. To the naked ear some machines were carrying differentiating exhaust levels, even though all bikes passed the two meter max test. On the surface the weekend showed the current level of world championship organisation and appeal, and the presence of industry personnel and former racers demonstrated the curiosity towards 21st century GPs. On the track the capabilities of the current protagonists perhaps caught the eye of the spectators inside the facility even if only Alessi and Townley presented a strong AMA-front. 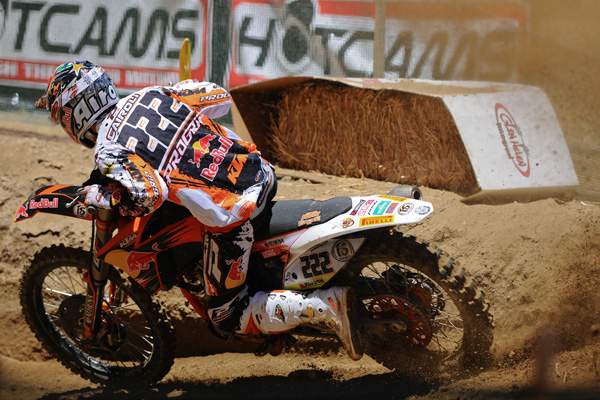 Cairoli was in top form in moto one and ended up with the overall.
Steve Cox Photo

The talking points? Cairoli and Alessi’s close duel was simply superb in the first MX1 moto and was given a lick of drama when Cairoli lost his gear shift through over-jumping a section, and completed the last quarter of the race behind and then ahead of his American brand-mate stuck in third gear and clutch-slipping his way up the hills. Townley should have been a part of the dice but had an acrimonious incident with Alessi early-doors that would damage his Honda and provoke his retirement effectively ending the Kiwi’s chance of a podium. Alessi dismissed the coming-together as a racing incident and insists he did not actually touch or mean malice to his AMA title-rival.

Townley, post-moto, was livid and pointed out the damage to his CRF to his team, later taking the chance to roost his rival on the exit to the sighting lap which led to a bout of hand-waving/gesturing between the duo. Alessi did not get the chance to respond as Townley flighted his way to a confident and easy win; his first at a GP since England 2005 and his first at Glen Helen since 2007. 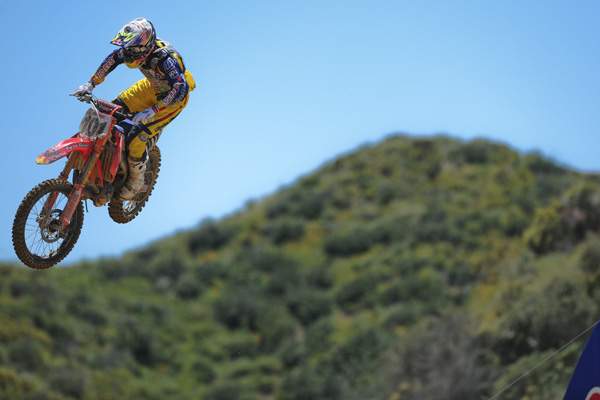 Ben Townley paid Alessi (and everyone else) back for the moto-one incident with a romp in moto two.
Steve Cox Photo

Behind him was another captivating bout of action with the two KTMs joined by Desalle who would eventually win through for his fourth podium result of 2010.

Elsewhere in MX1 Yamaha Monster Energy were represented by Ken De Dycker with a run to 4th in Moto1 (a poor start pushed him further down later on) but David Philippaerts could not get to grips with the course and had a technical problem with his front-end in the second race. Catalan GP winner two weeks ago Tanel Leok twisted his knee in Moto1 and saw his Honda expire in Moto2. Kawasaki Racing Team’s MX1 rookie Xavier Boog was again excellent for another top five overall finish. Cairoli’s team-mate Max Nagl was 3rd in Moto1 but bowed out of the tussle for third with the Sicilian and Alessi deep into Moto2 when he slithered off the side of the jump before the finish line and his 450’s rear wheel swallowed two fence stakes like a reluctant vampire as his blipped the throttle in frustration trying to retrieve the KTM.

The same area of the track was the source of bemusement and a narrow escape for the second MX2 moto when a rare strong gust sent the Red Bull bridge crashing to the ground and pinning amiable Finn Harri Kullas on the floor. The race was immediately red-flagged and it was hard not to see the symbolism of a Red Bull emblem squashing a Monster Energy rider less than 48 hours after the announcement that the American Energy drink firm will back the Red Bull-saturated-FIM competition for the next four years.

"I went over the first jump towards the bridge and I saw it coming down; I was going too fast and I thought they would be able to hold it but then it fell on my head and somehow I ended up under the bike with the bridge on top," recollected rookie Kullas. "I hurt my ass! I was lucky and somehow still finished tenth!" 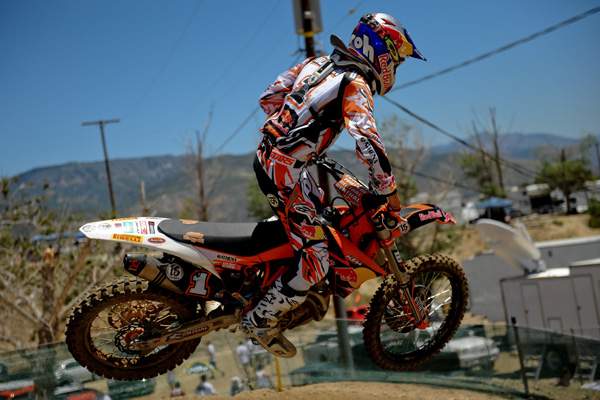 Nine positions further ahead world Champion Marvin Musquin had effectively won the race from Bike it Cosworth Yamaha’s Zach Osborne, once he had overtaken stubborn Scot Shaun Simpson. It was the fourth double of the season for the fiercely effective Frenchman and the American was thrilled for his well-earned and overdue first podium result of 2010 (claiming the Marty Moates Cup to-boot). Steven Frossard utilised the power of the Pro Circuit engines in his CLS Kawasaki on the uphills and again finished in the top three while a dismayed Teka Suzuki Europe World MX2’s Ken Roczen was left ruing poor luck on the opening laps that counted him out of contention for silverware. Max Anstie fell twice, ruining the positive vibes from his third place in the Saturday qualification heat, and Travis Baker’s appearance near the leaders in Moto1 could not be replicated at the second time of asking.

Cairoli fronts the MX1 series by 41 points and Musquin has a similar tally over former MX2 series leader Roczen by 40 marks. "I have never ridden a track as fast as this and yesterday it took time to learn it and also find the right setting for the bike," said Cairoli. I struggled a little bit but today it was rougher and bumpier and I felt better. The overall victory is important to me for the championship a good idea to mix a little bit the US and Europe."

"The GP guys aren’t used to this heat yet and they had to deal with jet lag and stuff and you don’t take that lightly," offered Townley who was the first winner of MX1 and MX2 GPs in 2005. "It was very difficult for me and I had to concentrate so hard; mentally it was tough. I am a big fans of GPs so I am disappointed with the crowd turn-out but I don’t know if that will be any better wherever you go in America. You need the American riders as a draw and if there is not going to be a bigger show than this then it is hard to justify. I am in two minds about it to be honest."

"I had a great time and I am happy I got through the weekend without any injury," commented Alessi. "This is the best I have seen Glen Helen and I have been coming here since 2005. They have done a great job in a short time."

On Sunday afternoon Youthstream commented in a press conference that the 2011 calendar is likely to see two visits to the US, occurring after the end of the Nationals and before the Motocross of Nations in September with the rest of the GP campaign occupying October; therefore removing the MXoN’s status as a season-closer. With a 2011 kick-off set for Broadford in Australia and Brazil set for another August fixture the paddock will have to be braced for four non-European events; doubling the outlay from 2010 but inching more towards the idea of a truly global series. 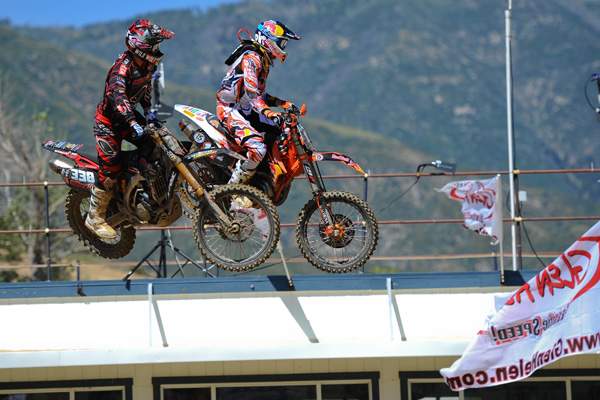 There is little time for respite or tourism post-Glen Helen. Most of the teams and riders were quickly packed up on Sunday night for flights back to Europe on Monday with the French Grand Prix occurring the following weekend. St Jean D’Angely, site of the 2000 Motocross of Nations, has been revamped under the guiding eye of former SX champion and 250cc world championship winner Mickael Pichon.