It’s no secret that Chad Reed’s supercross season didn’t go the way he wanted it to. After winning three races and finishing on the box sixteen times in 2009, the Monster Energy Kawasaki rider raced in just six races in 2010, and stood on the podium in only one of them. But with a new season comes a clean slate, and if anyone had any doubts about Reed’s ability to win outdoor races, they were put to rest at the opening round of the Lucas Oil AMA Pro Motocross Championship Series at the Rockstar Energy Drink Hangtown Motocross Classic. 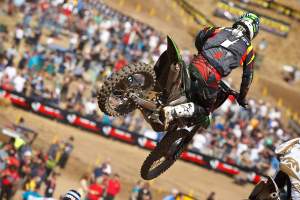 In practice, Reed looked smooth, but ended up qualifying eighth fastest, over two seconds slower than fast time setter Josh Grant of Muscle Milk/Toyota. But it didn’t seem to matter when it was race time, as Reed rocketed out of the gate to take the first holeshot of the 2010 season. Reed proceeded to check out, and completely dominated the first moto of day.

As well as Reed rode in the first moto, his performance in moto two was just as impressive, even though he didn’t win. Reed started the moto mired in the pack, and was forced to charge through on a track that had become more one-lined than a James Bond movie quote. To make matters worse, the track was littered with baseball-size rocks that had come up through the soil. When it was over, Reed had fought his way to a third place finish, which was good enough for the overall victory.

In the post-race press conference, Reed mentioned that he’d spent more time on airplanes than motorcycles since the Las Vegas supercross, but had still approached Hangtown with an optimistic attitude.

"I didn’t want it to go the way supercross did," Reed said. "I was being smart and being patient and put myself in a good position. I knew the bike was good, and was looking forward to just going racing to see where we’re at. I’ve been riding outdoors for quite a while now. Supercross 2010 blows for me, so I just concentrated on outdoors, came out, and did ok with it."

With his 1-3 score, Chad Reed now leads the series by two points over Jagermeister KTM’s Mike Alessi, whose 4-1 finishes earned him in second place.

The series resumes June 5, at the Freestone National in Wortham, TX. Reed will try to make it two in a row, while Alessi has shown that he and the 350 can be a deadly combination. Of course, both Reed and Alessi will have to deal with names like Davi Millsaps, Josh Grant, Ryan Dungey, Brett Metcalfe, Ben Townley, Andrew Short, and a host of other riders that have the speed to run up front. One thing is certain; no matter who wins, the fans in Texas are in store for another great day of racing.