In the 250cc class, we had Eli Tomac making his debut for the GEICO Powersports Honda team, Dean Wilson making his AMA National debut for the Monster Energy/Pro Circuit Kawasaki team, Tyla Rattray making his return to racing from injury for the same team after missing the whole supercross season, and Tommy Searle coming back to racing after getting injured during supercross – on a 2011 KTM 250 SX/F no less.

In the 450cc class, we had Mike Alessi returning to racing at the AMA National level for the first time since coming back from his broken kneecap a month or two early – and on a 2011 KTM 350 SX/F to boot – we had Brett Metcalfe making his 450cc debut for the GEICO Powersports Honda team, the American debut of the number-one plate on Chad Reed’s KX450F, Ryan Sipes’ 450cc debut for the Motoconcepts Yamaha team, Matt Goerke’s return to action for the same team, and finally, the return of Ben Townley to AMA National competition after a couple of years healing up.

With all of the talk about Rockstar/Makita Suzuki’s Ryan Dungey, Jagermeister KTM’s Mike Alessi, and even the return to action of both Josh Grant and Ben Townley, it did seem kind of weird that the defending 450cc National Champion, Chad Reed, wasn’t being brought up much in talk about who was going to be winning the 2010 title. 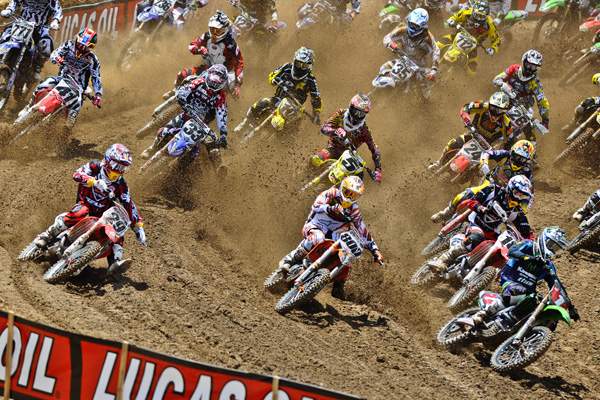 Chad Reed (1) leads off the start of moto 1. Reed won the moto and the overall.
Steve Cox Photo

That ended about five minutes into the first moto of the season, after Reed grabbed the holeshot and took off. Honda Red Bull Racing’s Davi Millsaps held second early on and looked like he was going to keep it until late in the race, when the battling duo of Alessi and Grant caught him. At that point, late in the race, as Alessi worked on Millsaps for second, Grant passed Alessi instead, then did likewise to Millsaps just before the checkered flag.

Grant held on for second behind Reed, but in front of Millsaps, Alessi, Metcalfe and Townley. Townley passed Millsaps much earlier in the race for second, only to fall, and Dungey came back from a horrible start to eighth before a fall relegated him to 10th in the moto.

In the second moto, Reed wasn’t as fortunate with his start, but Alessi was. He grabbed a pretty massive holeshot on his 350. From that point, no one really got close. Alessi won the moto going away over Millsaps and Reed, who came through from pretty far back for third. Behind Reed came Metcalfe, Andrew Short, Dungey and Townley. Again, Townley ran much closer to the front in the moto, but falls relegated him to seventh.

Reed’s 1-3 was good for the overall, although you wouldn’t know it by how Alessi pulled up onto the podium on his 350 and revved the bike after the race. In retaliation, the Kawasaki guys brought Reed’s bike up onto the podium following the ceremonies to point out who actually won the event. Alessi will be racing the US GP at Glen Helen next weekend, but pretty much everyone else will be taking the weekend off before heading to Freestone in two weeks time.

GEICO Powersports Honda’s Trey Canard grabbed the moto-one holeshot over Monser Energy/Pro Circuit Kawasaki’s Christophe Pourcel, but Pourcel was quickly around the fiery redhead and into the lead. Pourcel quickly began to distance himself from Canard and the rest of the field before Canard began uncharacteristically losing positions and falling back through the pack. Canard eventually finished seventh.

Pourcel fell a little past halfway when searching for lines while out front by himself, just in case he would need them in moto two. He got up third while Eli Tomac inherited the lead. However, Tomac also fell while leading, handing the lead to Searle, who held the lead until the final lap, when Pourcel came back calling. As Pourcel attempted to pass Searle around the outside of a turn on the last lap, Searle attempted to block the pass attempt and nearly sent Pourcel off of the track off of the face of the ensuing jump. Searle relented at the last moment, though, and Pourcel stayed on track and took the lead. Searle hung on for second over Tomac, Pourcel’s teammate Jake Weimer, Tomac’s teammate Justin Barcia, Pourcel’s other teammate Dean Wilson, DNA Shred Stix/Star Racing Yamaha’s Broc Tickle, and then Canard.

TLD/Lucas Oil Honda’s Wil Hahn grabbed the holeshot to start moto two, but the race was red-flagged when Blake Baggett and Drew Gosselaar hit the earth a ton in the first turn.

On the restart, Hahn again pulled the holeshot and led Canard and Tomac. Tomac passed Canard, but Canard passed him back only a lap later. A couple of laps go by before Tomac finds his way back around Canard, and then both of them do likewise with Hahn. 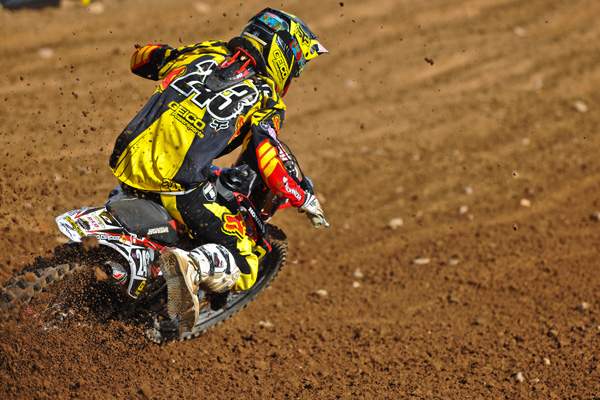 For the rest of the moto, Canard did everything he could to catch Tomac, but neither could gain or lose ground. Tomac took the moto – and overall – win in his first ever AMA National, while Pourcel was second overall via his 1-3 finishes and Canard was third with his 7-2 score. Fourth was Weimer over Barcia, Wilson, Tickle, Hahn, Searle and Rattray.