For this week’s Smith Optics Track Walk, Honda of Troy’s Darryn Durham takes us on a lap of this weekend’s Seattle Supercross track. 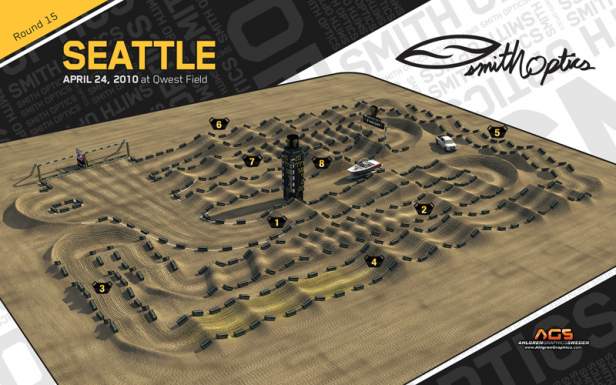 1. The start is pretty short. It's a 90-degree left turn, so things are bound to get interesting there, just like the first turn in Dallas. Riders will then go directly into a pretty technical rhythm section, which looks like a triple, step-on-step-off, then a single into a right-handed bowl turn.

2. Next there's a little triple coming right out of the corner, which riders can seat bounce. You’ll probably have to upshift in the air, because directly after the triple is a set of whoops. At the end are a few oddly shaped whoops, then it goes into a quick right-hander with a small double. The fast line here may just be to single-single, then take the inside in the left. There’s a nice 180-degree bowl turn here, which should be a good place to get a block pass in.
3. Depending on your line through the turn, this looks like a standard step-on-step-off if you go outside, or a single-tabletop-single if you go inside.

4. Out of this left you have three sand rollersm then some big air over the triple into a three-five-three, which will most likely be tripled if you can stop for the turn.

5. This section looks pretty cool. On a Lites bike, it should be a double-double-triple, but it's hard to tell what you’re capable of doing until you do the track walk.

7. Next is a little double into another set of whoops. You have a 180-degree right-hand bowl turn after that and then a sweet finish-line double to bust a trick or two. Immediately after the finish line are four small jumps, so this will probably be a double-double, then you’ll connect back on to the first rhythm lane.

The dirt is usually pretty soft in Seattle, so the track should break down and get some good ruts. But this, of course, depends on the weather, and at the moment the forecast is calling for occasional showers.