FMF/KTM’s Mike Brown took on a fast, tough track as well a field of fast tough riders to win his first race of the 2010 WORCS season in Adelanto, California. Brown came from a top five start and had to battle with Bobby Bonds, Robby Bell, Ricky Dietrich, Kyle Summers and his teammate Kurt Caselli to achieve a well-earned victory. “When you’re racing against guys like these, you never know when you’re going to score a win,” said Brown afterwords. “But I won here before and you always like tracks where you’ve won. Everything worked out today for sure, my FMF/KTM performed perfectly and I just kept riding my pace until I got to the front.”

Brown moved into the lead late into the second hour and was out of reach until the checkered flag. Taking second was Brown’s FMF/KTM teammate Kurt Caselli who gated mid-pack and put on his usual second-hour charge to move through the field and into second at the white flag. “I’m happy with second today,” said Caselli. “I’ve got my eye on the WORCS Championship and staying consistently on the podium is what I’m looking for. I love to win, but the title is the important thing.”

Third place went to Monster Energy Kawasaki’s Ricky Dietrich, who lead most of the race, but started to fade late in the second hour when bleeding, blistered hands slowed his pace.  “As bad as my hands feel, I’m surprised I got third today.” said Dietrich. “I just couldn’t hang on the last couple of laps, so I’m happy to be on the podium.”

Eli Tomac finished just off the boxes in fourth; his best WORCS finish to date. Just behind him was Justin Soule with a hard-fought fifth, with Gary Sutherlin sixth. Seventh place went to Makita FMF Suzuki Off Road’s Josh Strang. Strang, who is 4-for-4 in the GNCC Series, crashed hard early on but refused to retire and came steadily through the pack to score seventh.  Bobby Garrison put his Husky into eighth, with Nathan Woods Husaberg ninth and JP Davis 10th. 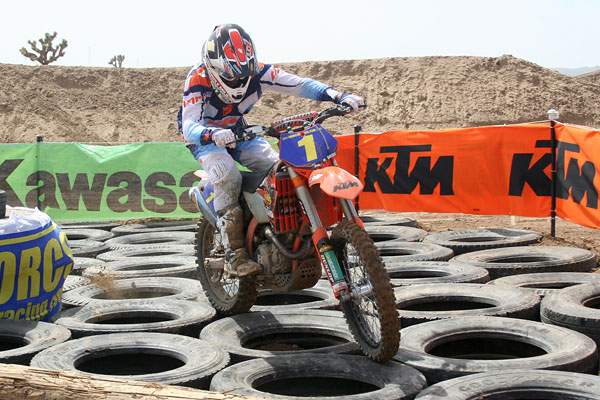