The 2010 Rockstar Australian MX Nationals kicked off this weekend in Horsham, Victoria, and international imports stole the show. It seems like every year the series heads to Horsham, the MX community is able to break the town’s drought, as forecasted rain came down by mid-morning and turned the hard-packed track into one of the toughest circuits many of the riders had faced.

This year’s Under 19 series is as stacked. Riders like Shaun Redhead, Matty Phillips, and Errol Willis all moved up into the pro ranks this year with mixed success at the opening round with, the more seasoned campaigners finding their way to the front of the pack in each of the three motos.

In the opening moto, Yamaha privateer Willis took the holeshot in front of seasoned 19s rider Josh Cachia. Errol's lead didn't last long, as Cachia moved his Motorex/JDR/Coastal KTM into the lead by the time the pack hit the first whoop section of the track, and this was the last anyone saw of the #10. Willis was locked into a tight battle with another one of the rookie graduates in Matt Phillips and Kiwi Hamish Dobbyn. Team 07/Axis Motorsports rider Dylan Peterson came from just inside the top ten to join the group as they tried to chase down Cachia in vain.

Ross Beaton suffered from a poor start, along with Luke Arbon, and the pair worked their way through the pack. Beaton was able to make his way into third by moto's end, behind Peterson and Cachia.

In the second moto, the 19s pack was looking to stall Cachia's early momentum. The weather wax also a concern, as the rain started to come down on the hard-packed circuit. When the gates dropped on moto 2, though, it was New Zealand rider Hamish Dobbyn who blasted out of the gates on his Suzuki and set the pace. Beaton rebounded from his poor start in Moto 1 to land in the top three off the start, while Luke Arbon found himself caught in a massive first-turn pileup. Cachia capitalized on a mistake from Dobbyn to move into the lead once again, and from there nobody was able to stop a dominant Cachia.

The final moto of the day had the whole U19s field looking for an answer to the speed and consistency of Josh Cachia. Honda supported Matty Phillips had looked good in both motos and was the most consistent rider of the rookies, posting a pair of fourth-place finishes. When the gate dropped, though, it was Hamish Dobbyn who grabbed the holeshot, while Cachia was left picking up his bike in the first turn. Dobbyn checked out from the field and built a huge lead for his first win of the season, while Cachia charged his way into sixth by moto's end. Dylan Peterson was able to finish second in the moto after coming off yet another bad start, and Honda's Matty Phillips finished third, capping a great debut.

Overall, Cachia did exactly what he did in the opening round of the 2009 series, schooling the field. Dobbyn, Peterson, and Beaton all finished with 60 points, with Dobbyn claiming second, Peterson second, and Beaton in third.

In the Pro Lites, all eyes were on U.S. import PJ Larsen as he put on a dominant display in timed qualifying with a time over 1.5 seconds quicker than SERCO Yamaha's Ford Dale. Dale, returning to the Lites class, was no surprise in second. Perhaps the most talked-about performance of the weekend was the return of 2008 champ Luke George, who put his Monster/Pro Circuit Kawasaki into third place, following a near-life-ending crash only eight months ago.

The start of the opening Lites moto was all about the newly formed JDR/Motorex KTM team. Ryan “Doggy” Marmont took the holeshot, while Larsen missed second gear off the start. This did nothing to stop his charge to the front, though, and he quickly put himself out of reach. PJ's JDR/Motorex KTM teammate Marmont was holding down a solid second over a charging Ford Dale, who had just made his way past ‘08 champ Luke George, who ran a solid third place for the first half of the moto. George would admit post-race that it wasn’t his speed or fitness that let him down, more just his lack of intensity after eight months away from racing.

Larsen won his first moto in the country by over 25 seconds, sending a clear message to the rest of the field. Marmont made it a JDR 1-2, and Dale made a solid return to the Lites class with a third-place finish. 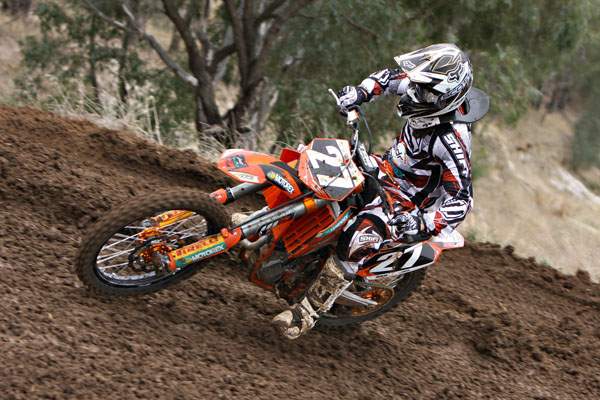 
Larsen was brimming with confidence coming into the second moto but went down early. He got up looking to make a charge but continued to make mistakes that would see him hit the ground repeatedly. After a solid charge in moto 1, Cody Mackie took the holeshot and looked for his first win in the Lites class after a season on an open bike. Kirk Gibbs also rebounded to run second in the moto early on, while Michael Phillips and Kade Mosig battled over third. That battle heated up as Mosig was able to make the pass stick on Phillips and then set his sights on Gibbs. Kirk Gibbs was able to weather to storm on the track and the attack from Mosig and slowly worked away at the lead Mackie had built, and on the last lap the pair dragged raced to the checkers and were only separated by two-tenths of a second, with Gibbs taking the win.

In the final Lites moto it was Larsen who came out of the gates with a point to prove, after finishing eleventh in the second race. Dale charged to the front off the start but went down on an extremely slippery and rutted track, handing Larsen the lead, which he would keep until the checkered flag. The mud provided some unpredictable racing, with Husky rider Matt Ryan spending the opening laps fighting former champ Darryl King for second place, just ahead of Yamaha privateer Tim Vare. Team Titan's Brenden Harrison was riding solidly in the mud along with Cody Mackie, as well.

Larsen will carry the leader’s red plate on his JDR/Motorex KTM at round 2 at Canberra. He was followed in the overall standings by his teammate Marmont and SERCO Yamaha’s Gibbs.

The words stacked field were used frequently in preseason talk this year, and that proved to be correct with three different winners in the Open class at Horsham. Much of the talk, though, surrounded the CDR/Rockstar team of defending champ Marmont and runner-up Cheyne Boyd. Todd Waters was returning to the Nationals, Dean Ferris was making his debut on the 450, and Cody Cooper had returned from the U.S.

After "surprising" everyone in qualifying, Andrew McFarlane reminded everyone why he is one of Australia's best riders ever. “Sharky” launched out of the gate and led the pack into the first turn with a huge holeshot. Billy MacKenzie was in hot pursuit, though, along with Dean Ferris and last year’s opening round winner, Todd Waters. Marmont and Boyd suffered from poor starts and were forced to follow each other the entire moto as they worked their way up to the front of the pack. Up front, an amazing battle erupted behind the Scot, as Waters and Ferris traded passes as they moved past Sharky. Waters and Ferris continued to go at it over second, and Waters made the pass while Billy Mac looked comfortable in front.

Dean Ferris eventually went down in the tough conditions and fell back in the pack, while Kiwi charger Cody Cooper looked at times to be the fastest man on the track, coming from nearly last to inside the top ten. Hart & Huntington rider Daniel McCoy also showed some great speed in the opening moto, finishing in the top five.

Waters was not done after he moved into second. He put on an impressive charge mid-moto and passed Mackenzie, then continued to check out over Mackenzie and the rest of the field. Waters would take the win over Mackenzie and McFarlane in what was shaping up to be a repeat first round victory for the 19-year-old Cougar Bourban/Thor Honda rider.

A bad start put Waters behind the eight ball in the second moto, leaving a lot of track between himself and Mackenzie, who was able to start up front. Ferris also started up front, and the pair swapped the lead several times, and it looked like the seasoned GP rider was content to sit and wait for a mistake by the rookie. That mistake came on the last lap, and Billy Mac was able to take his first moto win on Australian soil. Waters rode smart and rounded out the podium in third. 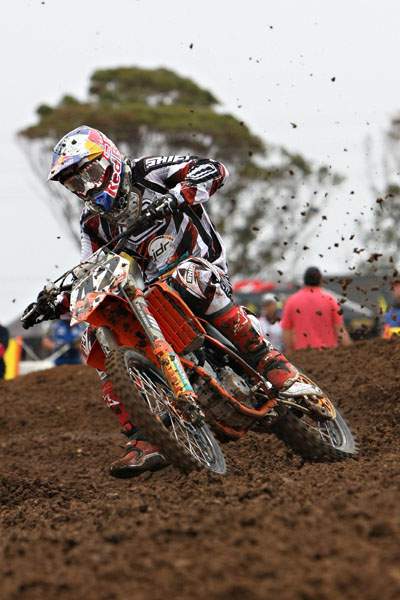 After continuous rain, the track was almost unrideable for the day’s last moto. The start would be vital, and it was Jay Marmont who rushed to the first turn and showed why he is the defending champion. He was solid in the icy conditions and edged farther and farther away from the pack. Tye Simmonds was debuting a works KTM 350 SX-F in Australia under the JDR/Motorex rig, and he finally managed to find his way to the front of the field after some bad luck in the opening races. Simmonds was able to hold off Mackenzie to take second while Todd Waters carded seventh after crashing multiple times in the slop.  McFarlane crossed the line in fifth, rebounding from a terrible second moto in which he finished twelfth.

It was the second of the two international imports, Billy Mackenzie, who stole the overall from Waters. Marmont made a bold statement with his third overall—a good place to be on a bad day.


The series heads to Canberra in two weekends’ time. Last year this was one of the most exciting rounds of the season, so expect more of the same this time around.

Be sure to visit MXDaily.com.au as we get ready to launch our first video from the MX Nationals, as well as interviews and our new Digital Dirt column.
Read Now
March 2022 Issue Now Available