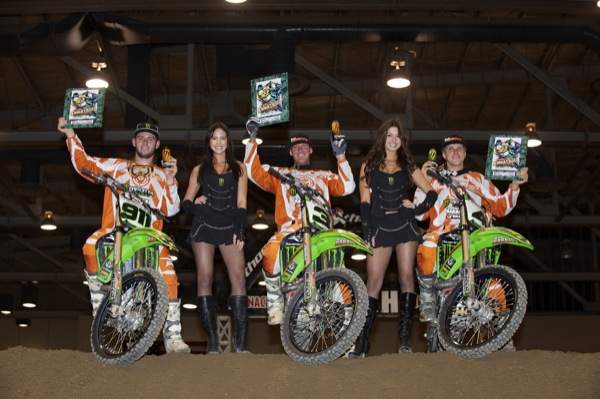 
As Spinechillers/Storm Lake Honda’s Nathan Skaggs, of Chillicothe, Ohio, grabbed the AMA Arenacross class Holeshot, Demuth, with Bowers and fellow teammate Chad Johnson, of Rhinelander, Wis., in tow, quickly made his move to the front of the field and led the rest of the way in the 25-lap main event. The 1-2-3 finish for the Babbitt’s squad was its fifth of the season with Bowers bringing home the runner-up spot and Johnson in third. In the championship fight, Demuth gained three points over Bowers.

The AMA Arenacross Lites class main event was all Catanzaro from the drop of the gate. The rookie rider took the Holeshot and proceeded to lead every lap of the 18-lap main event. In addition to it being his third victory, it was also his second straight win as the regional title fight hits the midway point of its 10-race season. Reynard Mods Kawasaki’s Cory Green, of Nowata, Okla., and No Fear/Spy Honda’s Parker Eckman, of Tustin, Calif., finished second and third, respectively.

The gap between Bowers and Demuth currently sits at 14 points in the premier AMA Arenacross class while Catanzaro extended his advantage to six points over Green in the AMA Arenacross Lites Western Regional battle.

The 2010 ArenOcross continues tomorrow night from the Livestock & Events Center for night two. The gates drop at 7:30 p.m.

Tickets for all rounds of the 2010 season can be purchased at www.ticketmaster.com and www.arenacross.com.

For more information on the AMA Arenacross Series log on to www.arenacross.com.