Brian Deegan began his short course off road journey back in April of 2008. Since debuting in 2009 as Owner/Driver of his race team, Deegan has learned a lot about the sport spending his off weekends practicing and getting underneath the hood to get an edge over the competition. Here’s what Deegan had to say going into this weekends inaugural race.

“I’m excited to get back behind the wheel of my Unlimited Lites Truck and battle against the competition in the Lucas Oil Off Road Series. My goal is to win each race and have a dominating race team. Also, stoked to have “twitch” under the tent and looking forward to taking over the sport Metal Mulisha style” 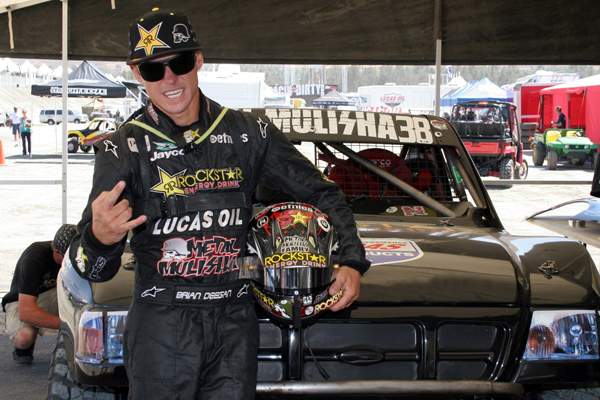 Joining Deegan underneath the Rockstar/Metal Mulisha/Lucas Oil/Maxxis Tires tent this year competing in the Super Lites class will be long time friend and FMX rider Jeremy “Twitch” Stenberg . Also competing alongside Deegan in the Unlimited Lites class for the 2nd year in a row will be teammate Todd Cuffaro of Cuffaro Motorsports. Last but certainly not least competing in the Junior Kart 1 class will be none other than Brian’s daughter Hailie “Dirt Princess” Deegan. Hailie made her first off road appearance in Perris, CA last August and took home 1st place! It must be in the blood of a Deegan to continually dominate the competition. This year should prove to be another exciting year for Rockstar/Metal Mulisha/Lucas Oil/Maxxis Tires race team and the Deegan family.