Advertisement | Advertise with Us
If you’re a member of the industry, you probably know Chaplain Steve Hudson; if you don’t, well, let me tell you that he’s truly one of the nicest people you could ever hope to meet. Over the last decade or so, “Chappy” has been the race Chaplain at both motocross and supercross events, holding prayer meetings and chapel services at all the races following the rider’s meetings. Hudson has also performed the wedding ceremony at several of the top riders’ weddings over the years, and he’s currently the team chaplain for Hendrick Motorsports, one of the elite teams in NASCAR racing.
Recently, though, Steve was called upon to provide help in the earthquake-ravaged country of Haiti, and what he saw there has forever changed his life. We spoke with him about it today.

Racer X: Steve, you’ve just been on the mission of your life, haven’t you?
Steve Hudson: Oh, man. Well, I left Anaheim II on Sunday, got home, slept about eight hours, and then got on a plane for West Palm Beach, Florida. I arrived there and then drove about an hour north to Fort Pierce, Florida, where Missionary Flights International is based out of. That’s the group that Hendrick Motorsports kind of fell under. It’s a missionary group that’s been doing work with Haiti for a long, long time. The guys at Hendrick found Missionary Flights International and said, “Hey, if you need us you can use our planes.” And me being the chaplain out at Hendrick Motorsports, we sent our planes, and the pilots started experiencing trauma just because of what they see flying in, and what they hear from the people getting on the plane. I’ve been trauma trained and certified to deal with these things, so he asked me to go down.
So, on Monday night I spoke with a group of pilots, and then on Tuesday morning I got up and headed over to Haiti. It’s unbelievable, man. It’s an incredible thing that has happened over there. I got off the plane and went into the hospital right there at the airport, and I saw more destruction there than I have seen in my entire ministry of about 24 years. There’s just a lot of destruction and disaster down there. At that particular time, it was Hendrick Motorsports that had been there for a good period, and Joe Gibbs sent down a plane – everything going under the hospices of Missionary Flights International, and those guys have done just a fantastic job of getting people out (doctors and aid workers) and getting people and cargo in. They were working on people with no anesthesia at all. It’s just a massive undertaking. If you look at New Orleans, you had capabilities of people coming in from all directions, but Haiti is an island and it’s way far off. It’s just something that has changed my life.

What, exactly, did you do, Steve, and how long were you there?
My initial mission was just to talk to the pilots about trauma, and then Marshall—he’s the head guy over at Hendrick Motorsports—asked me to go in so I could see and hear what the pilots were hearing so I could help them and speak to them. So when I landed I went through customs and I visited the hospitals. I was there all day on Tuesday and we got out of there by night time. It gets very dangerous at night over there, so nobody wants to take a chance with that. When you fly in you see despair everywhere. You see fires burning. In those fires, we were told they heat up tires and then they put bodies on those fires because there was no way to deal with disease. There were a lot of bodies.

How would you describe the efforts over there?
It was organized chaos. The U.N. is there, and our military is there. Again, I left there last week this time, so I don’t know how things have changed. No one was being let into that country, but the reason we were was because we went under the hospices of Missionary Flights International, and that’s the only reason. Nobody else was being allowed to come in and do anything because of logistics. Most of the planes had to fly in just by visuals at first, but they finally got an air tower up and running. I don’t know if you’ve ever seen the show MASH on TV, but it’s a constant act of helicopters lifting off, large aircrafts landing and taking off, and bad smells.

When this tragedy first unfolded, you probably had no idea that you’d find yourself over there at one point.
I had no clue, man. I’m like everybody else; if it’s not right under our nose, it doesn’t affect us. Someone had mentioned that Mr. Hendrick was going to send some planes, and that was a great thing to do. I can tell you that it was a lot of money, but that guy and what he did with his equipment, Mr. Hendrick has no idea of the good he has done down there in such a short period of time.

Will you be going back over, Steve?
We’re put in places at times that you never know what’s going to happen. This has directly changed the way I think and the way I feel on a daily basis about my life and about food and shelter and freedom and government—just all of that. I’m working right now on trying to get a used four-wheeler for one of the missionaries that takes food to villages back over the mountain and in desolate areas. He’s been doing that since before the earthquake, and now he’s really adamant about getting supplies to people and he’s got an old, jacked-up four-wheeler. And here’s the deal, man, he’s from Morgantown, West Virginia! I got off the plane and I just met him for a few seconds and he’s a good old boy. He was standing there and I noticed he had a knee brace on, so that night when I got back to Florida, I snatched up a new knee brace and told one of the pilots to give him the new brace.
But, I’m working with some people on trying to get a four-wheeler over to him. The problem is, if you give them something, it costs him money for taxes and duties. Regardless, I’d like to go back over and put a group together to help. When I was going to college and seminary I did pipe-fitting, electrical work, plumbing, construction—I could carry two by fours and material, so I’m looking forward to that kind of opportunity, maybe putting together a team or two and go over there. I just want to lend a hand, because for whatever reason it crossed my path and I feel obligated to do it.

You, of all people, know how generous the supercross and motocross community is, so what’s the best way for someone reading this to help?
The best way is box whatever you want up and get it to the people at Missionary Flights International. I believe John Ayers at Mototees and you guys and the NPG have donated t-shirts and products, so hats off to all of you. Those people, when they get out of the hospitals, they’re missing limbs, they’re missing parents, they’re missing children. So let’s say you get all fixed up from one of those portable hospitals, you get sent on your way and you don’t have a home to go back to and you don’t have anything to eat.
So, people can send anything. I was in the hangar in Florida and I saw a row of boxes, and they were all labeled. One would say ‘bags,’ another would say ‘toilet tissue,’ or ‘toothpaste.’ Just whatever people can send. But Missionary Flights International is the main vein. If you send a box today, they can probably get that box and package into Haiti immediately.

How about if a dealer or someone is reading this and wants to donate an old ATV for you to get to that missionary, can they contact you directly?
Absolutlely, Bill. If people want to get in touch with me, they can email me directly at stevehudson7@gmail.com.

Well, hats off to you, Steve.
Thanks, Bill. It’s going to be a long process, so anything anybody can do is good. 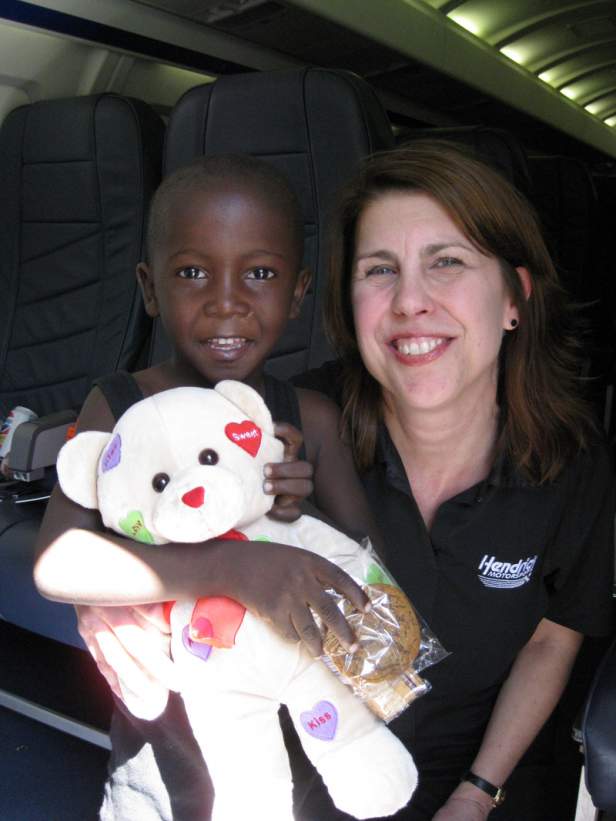