For today’s San Francisco edition of the Smith Optics Track Walk, we dialed up 1997 Eastern Regional 125cc Supercross Champion Tim Ferry. “This track seems pretty tight,” says the two-time Motocross of Nations champion, “and it has a lot of jumps. I’d assume that this is going to be a pretty short lap time, maybe mid-45s, roughly.” 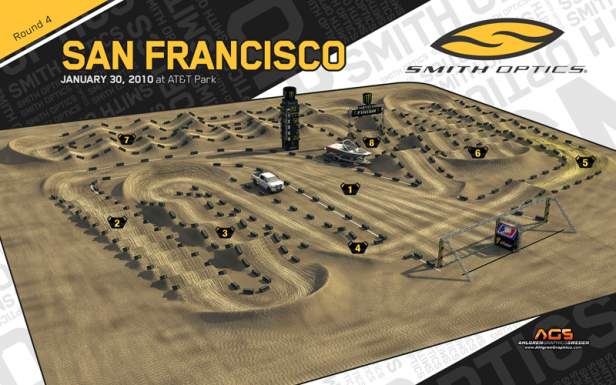 1. For me, I’d line up right next to the box. It looks like it’s a pretty straight shot, so right on the inside of the box. Plus you don’t have anybody on your right side, so you have a little bit of room if you get a little squirrelly. The first two turns are left-handers, which will thin the pack out quick, which is pretty typical for this race. So I think everyone will spread out, especially going into the whoops.

2. This section is a pretty standard whoop section. San Francisco always has really rocky dirt, so it gets worn down pretty quick, so I imagine this section will have a lot of grooves and ruts. I would imagine these will be pretty small by the time the main events roll around.
{LINKS}
3. You go into a left-hand bowl turn, which will probably be a pretty good spot for passing. You can make up time in the whoops with the intent of making a block-pass before the triple. This triple should be pretty easy. Also, if you’re really close going into the triple, you’re going into another bowl turn after the triple, so you could make a pass there.

4. This section is pretty wide open, which San Francisco usually has. Sometimes they add in little moguls to these sections, but right now it’s flat, which is where the mechanics’ area will be, I’m assuming. You then cross the start into a single jump and then into a left-handed sand turn. 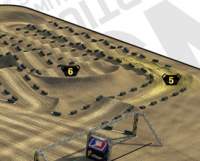 5. The sand turn will probably have a couple different lines. The sand is funky, though, and how you go through this section will dictate your line choice through the following rhythm section. If it’s soft, you’ll probably double-triple into the corner. I don’t think a triple-double will be any faster. The only advantage of tripling out is carrying more momentum into the berm.

6. This looks like another small whoop section into a bowl turn—a lot of bowl turns on this track. This next section looks like a three-five-three-five-three section. Coming out of the turn, it’ll either be two-three or three-two, doubling into the 90. Either way you’re going to be forced to go to the outside to get the drive to hit the next triple.

7. This section will probably be pretty one-lined, with a small triple leading into a normal triple. You then go into a left-hander that goes into the main rhythm section. The ideal line looks to be three-three-one, then a roll to the inside. You could also do two-three-two, but the last double will probably send you pretty high, so you’re losing some time there. So it may turn into a two-two-two, then a roll. Being that the dirt really gets eaten up here and forms a lot of big holes, I can easily see this turning into a two-two-two-one, especially for the Lites guys. No matter what I think, everyone will be singling into the corner, then staying tight to the inside.

8. This finish line looks similar to Jacksonville last year, where I think James made his pass on Chad. I see this being another spot to make some block-passes. After the jump you hook a tight right and it’s wide open around to the whoops.