The painting features Chandler cranked over in mid-flight on his 1975 KTM/Penton which was raced out of Mike Collins' Dirt factory in Concord, California. This bike featured a Carl Cranke motor, Fox Air Shox and a totally fearless pilot in Chandler. "The painting captures that very successful and fun time in my racing career," recollects Magoo. "That really brings me back!" says the Overall Champion of both the 1982 Motocross and Trophee des Nations. 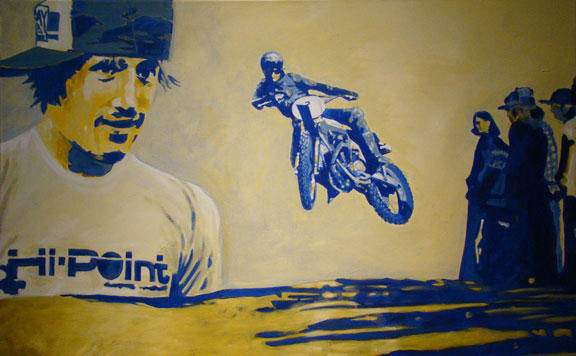 "The retro painting style is a perfect way to showcase Magoo's innovative riding style and everything he has done for the sport," adds Brad Lackey, America's First Motocross World Champion. "Magoo was doing freestyle motocross decades before the sport was even invented," Lackey notes. Limited edition prints of the painting signed by Magoo himself will also be offered via another online auction.

Artist Kelly Telfer met with Magoo, Brad & Lori Lackey and Billy Daprato (Chandler's longtime race mechanic and friend) to present the painting to Magoo. Danny was very impressed and pleased with the artwork, and the painting brought back great memories from that era. Magoo, Brad and Billy reminisced about the early days of motocross, sharing some laughs and racing stories.

Signed limited edition prints of the painting will go up for eBay auction on Sunday, 01/24/10. To see the video presentation of Kelly presenting the painting at Brad's house or more info on the "Bob Hannah Magoo Van Fund Challenge", a special 501(c)(3) eligible project visit:
www.LegendsAndHeroesTour.org
www.BradLackey.com

About the artist:
Kelly Telfer has been drawing and painting practically his whole life. Kelly founded one of the nation's largest motorsports marketing and T-shirt businesses in the 1980's, creating artwork and shirts for the "who's who" list of motorcycle, NASCAR, F1, Indy Car and Sprint Car racers, companies and tracks. In fact, when Brad Lackey won the 1982 World Motocross title, Kelly was selected to design his T-shirts. Although Kelly has done work for many of the greats in motorsports, he considers it a special honor to have done this painting to support Magoo. Kelly's paintings have been displayed and shown in galleries and shows across the United States, and his artwork is currently on display at Canepa Design, in Scotts Valley, CA. You can see samples of his artwork at: www.kellytelfer.com