Congratulations go out once again to Monster Energy/Pro Circuit/Kawasaki’s Jake Weimer on his second Lites West win of the season.  Jake overcame some misfortune in practice and qualifying on Saturday as well as a rough start in the main event to go two-for-two in 2010 and put himself in terrific position to continue the championship push. 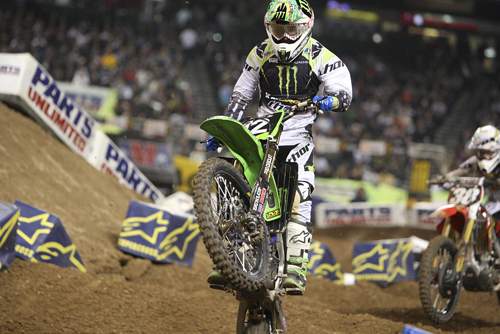 
If that wasn’t enough, Ryan Villopoto found himself on the podium for the first time this season.  His solid second place finish was enough to move him up three positions to second overall in the standings. 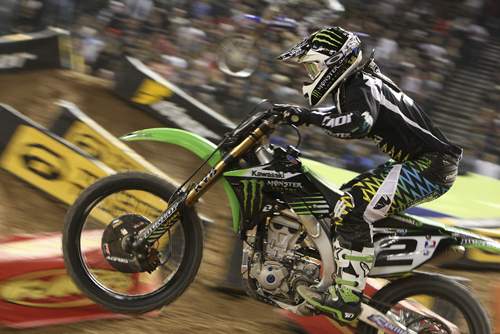 
RV is now poised for a showdown with Ryan Dungey, which should be familiar territory dating back to when the duo went head-to-head at the 2008 outdoor nationals.  With the potential battle looming, RV looks poised to close the gap in the standings after defending champion James Stewart suffered a setback when a wreck ended his Phoenix chances early.  While Stewart’s mishap coincided with an early departure for Chad Reed, there is no doubt Reed will get himself healthy and be back racing for titles soon.  Best wishes go out to Chad on a speedy recovery.

In some off the track news there are some exciting updates to come from Thor MX.  First, Thor is proud to announce the creation of the official Thor MX Facebook page.  Supporters should log on to Facebook and search “Thor MX – Official Page” to become a fan and gain access to the most up to date Thor news and updates.  You can also become a fan by clicking on this link to check out the page.

One item in particular that will be featured on Facebook is Thor TV.  Thor TV will be back in action this weekend at Anaheim2 and in case you missed the first broadcast at Anaheim1, check out the website (http://thormx.com/) or our new YouTube channel to view the latest Thor TV video. More details will be coming this week about the guests who will be appearing on the second edition of Thor TV.  Stay tuned!

Wrapping it up, Thor MX fans should be on alert for some exciting news involving a limited edition gear release.  Details will be announced in the coming weeks on how to take advantage of this exclusive opportunity.  Make sure you become a fan of Thor MX on Facebook for the most up to the minute details.


About Parts Unlimited
Parts Unlimited is the world's largest distributor of aftermarket accessories in the powersports industry and is owned by LeMans Corporation headquartered in Janesville, Wisconsin. Parts Unlimited sells to over 12,000 dealerships world wide and continues to expand its market penetration with its sister companies, Parts Canada, Parts Europe and Drag Specialties.

Parts Unlimited continues to promote racing through its campaign WE SUPPORT THE SPORT®, helping to drive consumers to dealerships, while entertaining its dealers through hospitalities at the events it sponsors.

About Thor Motocross
Thor is one of the originators of motocross apparel. When Torsten Hallman made his first U.S trip to race and promote motocross in 1966, he inadvertently started to develop Thor riding gear. Thor is a hardcore, grass roots company that understands what it takes to reach the top and more importantly, how to stay there. It is one of a few companies with over 40 years experience in the motocross marketplace.

Thor, a house brand company for Parts Unlimited, combines design and marketing with superior distribution to reach it's thousands of dealers and consumers priding ourselves on key selling features like quality, strength and performance. Thor is more than a brand. It is a lifestyle.
Read Now
December 2021 Issue Now Available