In an age where many high-adrenaline sports have become watered-down exercises in marketing, dirt bike racing remains intensely raw; a dangerous enterprise populated with a colorful, profane cast of daredevils. On the backs of snorting, twitchy Kawasakis and KTMs, these athletes race through the forest in pursuit of a podium spot and a sponsorship. Ortolani applies an artist’s eye to this unforgiving sport and the riders who pursue it, resulting in an unprecedented, behind-the-scenes window into this punishing competition.

Endurance offers embedded access and a scope that spans three years of off-road racing. Ortolani began shooting Nathan Kanney at a race in 2006 in which Kanney made Grand National Cross Country history by winning the race as a privateer and Ortolani was hooked on a sport that is at turns beautiful and inescapably brutal. Ortolani traveled thousands of miles across the U.S. and Europe, in the process capturing Kanney’s ascent from underdog privateer to Husqvarna and KTM Factory Team rider—an achievement that required beating world champions riding bikes three times the cost of his. 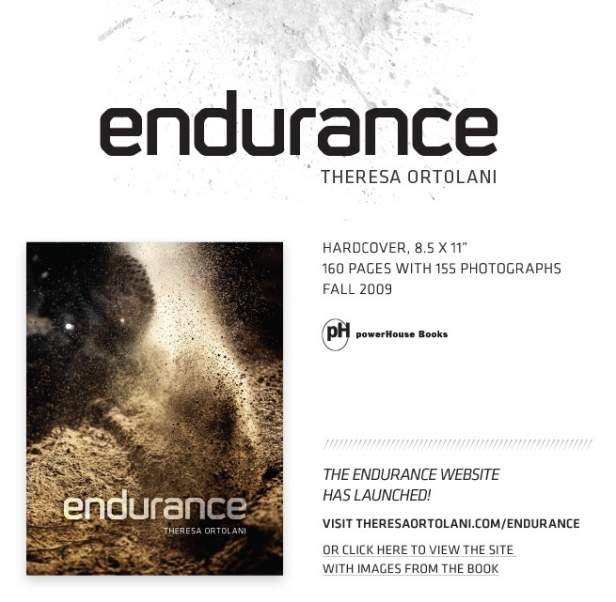 ­Theresa Ortolani is a Brooklyn-based photographer. She received a BFA from the School of Visual Arts at Boston University and was awarded a Sojourner Truth Fellowship for Graduate Studies in Fine Art Photography. She has developed and directed photography programs in conjunction with the Ansel Adams Center, the San Francisco Art Institute, NYU, and SUNY. When she’s not dodging dirt bikes or setting stuntmen aflame for her upcoming release, Don’t Try This at Home, she spends time in New Paltz, NY.

Ian McLaughlin is a New York stuntman, stunt coordinator and stunt rigger. Among the numerous films he has appeared in are Salt, Shutter Island, Duplicity, I Am Legend, and The Departed. He has doubled actors including Clive Owen, Ashton Kutcher, Hayden Christensen, Bradley Cooper, and Christopher Meloni. McLaughlin also races dirt bikes. He is the Technical Consultant and, along with Theresa Ortolani, is the Coeditor of Photography and Text for Endurance.

Ezra Dyer is a journalist who has covered cars for Esquire, Men’s Journal, The New York Times, and Automobile Magazine, among other publications. A multiple International Automotive Media Award-winner, Dyer earned a 2008 Folio Eddie Award gold medal for his Automobile feature story on the Smart Car. Ezra has a motorcycle license, but remains vaguely afraid of dirt bikes after crashing his Arctic Cat minibike into his house at age ten.

Eddie Brannan is the Creative Director of CITY Magazine. One of the founding editors of Trace Magazine, he went on to become Creative Director of The Fader, BlackBook, and SPREAD ArtCulture magazines. He’s a contributing editor to Big and Big Man magazines, and has worked on advertising and branding projects for clients including Alexander McQueen/Puma, and Lexus. CITY Art Director, Alexander Wolf, joins him in the design of Endurance.

For more information about Endurance, please contact the author: