Yesterday, it was announced that Suzuki City satellite rider Matt Goerke has been dispatched to ride Josh Hill’s factory Yamaha YZ450F at both the approaching Unadilla and Budds Creek Nationals. Earlier this year, an off-road racer named Ricky Dietrich came, literally, out of the wilderness to ride Tim Ferry’s works KX450F and has posted compelling results since.

During this summer’s Great War of Attrition on the Lucas Oil AMA Pro Motocross Championship, a handful of lesser known riders have been given “American Idol” shots at racing on factory equipment. It’s not a new story. Nearly three decades ago, a relatively unknown support rider out of Florida named Kenny Keylon was handed Darrell Schultz’ Honda 250cc wonder bike. That spring, on a brutal sand track in Florida – one that makes Southwick look like the 405 freeway – Keylon pulled off one of the greatest upsets in American motocross history. Here’s the story of that day, which ran in the June 2002 issue of Racer X. You can read that feature by clicking here or on the image below. (Adobe Reader required) 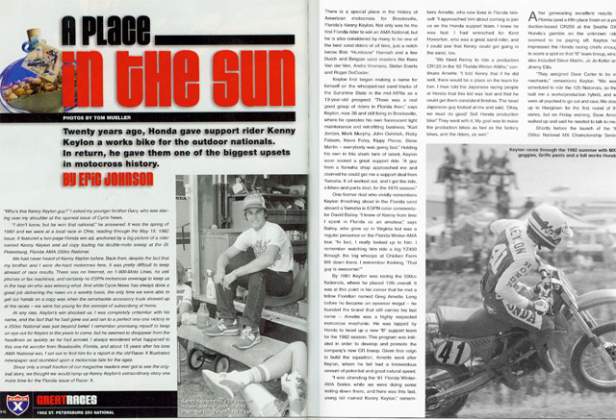