Adamitis isn’t a medical term for the swelling of your Adam’s Apple, it’s the last name of the most prolific movie-maker in modern motocross, Troy Adamitis. Now having completed 20 movies about outdoor motocross racing, his latest, “TGO The Destroyers: Special Edition” takes us more behind the scenes than ever. We talked to him about his latest project for this week’s Between the Motos.

Racer X: Talk a little bit about your latest movie.
Troy Adamitis: The movie that I just finished marked the 20th movie that I’ve made on motocross, so Jeff Surwall and I have been partners on this since ’02. It’s just amazing how time has flown by, and you look back and see that we basically captured all of [James] Stewart’s career, most of Ricky’s career from when he was on a Honda on up, and you think of things that we’ve been able to see and we’ve been able to document, and it’s pretty amazing. The movie we just came out with is called “TGO The Destroyers: Special Edition” and we always do a special edition every year with all new footage. It’s basically all the footage we wanted to squeeze into the first one but couldn’t. We’re able to take that, and the interviews, and the outtakes, and just have a little more fun with it and give the fans a whole new perspective of what went on during the last season.

So, it’s more behind-the-scenes than normal?
Yeah, especially this one, because “TGO: The Destroyers” was really hardcore race-by-race, every moto, and of the 48 motos run, they include 45 holeshots, and you know who got third place, who got second, who got the overall... I mean, we really made it like a historical chronicle of the events, and that’s what we were going for. But we sat back and looked at it for a while and realized that we were missing the basics – the personalities, hearing the guys talk... So we went back and grabbed all that stuff. The Special Edition really allows us to have fun with it and just focus more on who these guys are instead of where they placed in moto two at Red Bud, you know what I mean?

Many times it’s the personalities that seem to be missing in our sport, and here at Racer X, we also try and bring out the personalities a bit so that our readers realize that these guys are people, not just racers.
There are plenty of personalities in our sport. I think that raceday is just not a real good time to get those guys, sometimes. They’re not themselves. They have to be focused, serious, and all that. For instance, we went to see Mike Alessi four days after his crash [at RedBud]. I wanted to go just to see what kind of condition he was in, and we brought our cameras just to do an update, and he cruised out and was joking around. I didn’t even think he was going to be walking, but we did cool stuff where we showed his dad Tony the video of the crash (and Mike didn’t want to look at it) all in slow-mo, and we got their reaction to it and were able to talk about it and joke about it. It just made us go, “You know, this is the kind of stuff that people want to see. They know who won and all that, but they don’t get to see this kind of stuff.” Jeff Surwall recognized that and said, “Hey, the last one was too much like a year in review,” so he wants the ’09 movie to be way more off-the-bike stuff, and I think he’s onto something. I think that’s a good way to go, so that’s what we’re going to try to do.

I know as a guy who had to write race reports every week during the nationals last summer that it can be pretty tough to talk about a guy winning every moto and make it interesting. That was true when RC was doing it, and it was true when James was doing it last summer.
Yeah, well the great thing about this sport is there always is a story, and that’s an amazing story, that James Stewart won every single moto. You can make a whole story about that, but it did overshadow a lot of things that are in the special edition this year. For instance, we hung out with J-Bone [Jeremy Albrecht] at Joe Gibbs Racing, and we were there with him at Steel City and he was trying out these two privateer kids because all of his guys were hurt. He was just saying, “Hey, man, we just want to some guys on our bikes,” and it was just a really cool thing that went back to why we all do this from the beginning, which is to support riders. So that’s a really cool piece, and we did a piece on the Wonder Warthog Racing guys, and I was blown away with how those guys finance those dudes. Their actual reward is for the rider to leave that team and hopefully step up to a bigger team. That’s your reward? That’s kind of amazing how selfless that stuff is, and you find a lot of stories like that as you look around the pits. You find stories like that everywhere.

If you’re going to do this for the regular movies from now on, what the heck are you going to do for your special editions?
Somehow we’ve always been able to figure it out and give the fans something different, so they don’t feel like they’re buying the same movie twice. I think the key is just the good mix. You’ve got to give the fans the great riding and show the whole track, and show good starts, but you also have to show the drama that goes on underneath the tent, and you’ve also got to show that these guys have a sense of humor. I mean, those guys at the Factory Connection team, and at the Suzuki team, they may not look like it when you’re standing on the outside, but those guys are in there talking smack to each other and just having a good time, you know? That’s the kind of stuff that I want to try to capture, just to show that there’s a lighter side. You’ve got to make it fun or it would be miserable to spend your whole life traveling around the country in the heat.

So where can they get the Special Edition?
It’s available now at NoFearMX.com, or you can find it at your local motocross shop just like always. This one has tons more personality, more behind-the-scenes stuff that was missing from the first one, and then next year it’s just going to be a good mix. It’s going to be awesome. I was just watching a section called “Battles” that’s on the Special Edition, and just watching that, you get so pumped and you can’t wait for the season to start. It’s like eight minutes of guys just going at it. This has something for everyone in it. 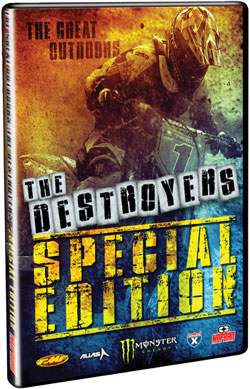