AURORA, Ill. (May 1, 2009) – Through 16 races, 11 states, and 14 cities, the most intense and closely contested Monster Energy® AMA Supercross, an FIM World Championship, season in history draws to an exciting conclusion this weekend at Sam Boyd Stadium in Las Vegas. The world’s fastest riders and fierce rivals, Team San Manuel Yamaha’s James Stewart and Rockstar/Makita Suzuki’s Chad Reed, will battle it out one final time for the coveted world championship live on SPEED (10pm EST/ 7pm PST). 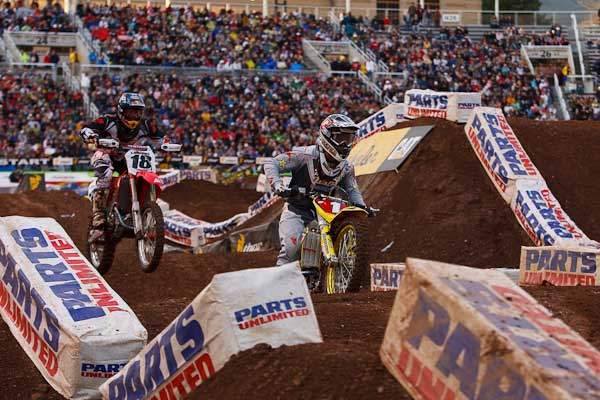 Despite sitting six points behind, a motivated Chad Reed could pull off an upset victory Saturday night and claim his third-career championship.
(Photo Credit: Brian Robinette)

Last weekend, Monster Energy® AMA Supercross’ return to Salt Lake City produced one of the most controversial races in recent memory when Stewart’s teammate Kyle Chisholm appeared to interfere in the heated battle for the lead between the current points leader and Reed. The altercation allowed Stewart to slowly pull away while Chisholm was black flagged and disqualified by the AMA and will actually have to sit out this weekend’s race for his actions. As a result, Stewart’s advantage over Reed heading into Las Vegas sits at six points, meaning the 2007 champion needs to finish third or better to guarantee his second career AMA Supercross class title.

“It feels great to get the win (in Salt Lake),” said Stewart. “(I’m) still going to be working hard this whole week getting ready for Vegas but tonight I got that San Manuel Yamaha out front and that's what mattered.”

A clearly irritated Reed kept to himself on the podium in Salt Lake City, but onlookers knew that inside the defending champion’s head he had to be wondering what could have been. While it is unclear if team orders played into last Saturday’s main event, the absence of Chisholm and the possibility of having his own teammate by his side is not forgotten by Reed.

“It’s going to be interesting next week at Las Vegas,” stated Reed. “I want to get out front on my Rockstar Makita Suzuki RM-Z450 and ride strong. I’m going to do everything in my power to win this title. Whatever it takes to do that, I’ll do it. Hopefully we’ll have a yellow 800 (teammate Mike Alessi) in the race as well.”

Speaking of Reed’s teammate, Alessi struggled in Utah and had his worst performance of the 2009 season when he failed to qualify for the main event. Tricky conditions and an apparent illness slowed the California rider but he is determined to bounce back this weekend and end the season on a high note as he heads into the outdoor season.

“I’m looking forward to closing out the season at Las Vegas,” explained Alessi. “I’ve tried to improve steadily over the last year and I feel pretty good about my overall performance. Now the end of the season is near, and I can see the finish line. So next weekend is like any other supercross for me – try to get another holeshot on the Rockstar Makita Suzuki RM-Z450 and run up front and get on the podium.” 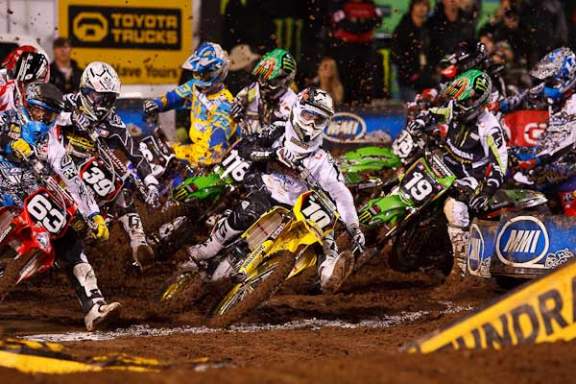 The third representative of the Rockstar/Makita Suzuki team last weekend, Ryan Dungey, left Salt Lake City with a number one plate in his hands as he claimed his first career title in the AMA Supercross Lites Western Regional Championship. While the four-race winner didn’t bring home win number five, he did what he had to do to take the coveted title. Now, he sets his sights on a third-straight Dave Coombs Sr. East/West Supercross Lites Shootout victory.

“I’m just going to take the Las Vegas shoot-out as another race,” said Dungey. “Obviously, our season is already wrapped up but I’d like to be there in the end and it would be nice to win it. Most importantly, I want to have a solid race and keep it safe.”

For GEICO Powersports Honda’s Trey Canard, Salt Lake City was a bright spot in an otherwise troubled season. The 2008 AMA Supercross Lites Eastern Regional Champion struggled in his move west but soldiered through all eight rounds to bring home a hard-earned victory at the final race.

"It was awesome to finish off the AMA Supercross Western Regional championship on a high note winning the final round,” boasted Canard. “It's definitely been a rough season for me so to finish on the top step of the box is great not only for me but also the GEICO Powersports Honda team. Everyone works so hard and I really wanted to give them the win to finish out the season.”

At Honda Red Bull Racing, Davi Millsaps continued a late-season surge by capturing his second-consecutive podium. While his season has been up and down, a renewed focus has Millsaps energized and ready to show what he’s capable of. If he plays his cards right, he could leave Las Vegas a lucky winner.

"I'm pumped to finish Salt Lake City third on the podium,” exclaimed Millsaps. “Everything worked great on the night and I am happy to make it onto the podium two weeks in a row. Going into the final round at Las Vegas this weekend it's definitely my mission to continue my podium run and finish on the box. I want to finish out on a high note." 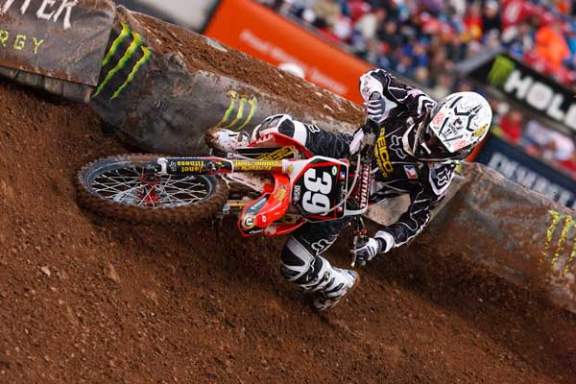 Trey Canard’s much-needed victory in Salt Lake City could be the spark that pushes him to the front of the pack in Las Vegas.
(Photo Credit: Simon Cudby)

The Monster Energy Kawasaki team had another solid weekend on racing in Utah with its riders Ryan Villopoto and Billy Laninovich.

Just one week removed from his first-career AMA Supercross class victory, Villopoto produced another strong outing as he continues his comeback from a mid-season illness that forced him to the sidelines. After a mid-pack start, the rookie worked his way through the field to finish just off the podium in fourth. He is looking for more of the same this weekend.

“I need to get a good start,” said Villopoto. “I know I have the speed to race with those guys up front and I really want to end the supercross season on the podium. The team has put a lot of effort into this season and I want to finish it on a positive note.”

While Laninovich was hoping to earn his second top-10 finish of the season, he left Salt Lake City satisfied with his 13th-place effort and wants to perform well in front his supporters in his final ride of the 2009 season.

“I’ can’t wait to get to Las Vegas,” stated Laninovich. “The dirt should be good for me and I’m going to have a lot of fans there cheering me on. I want to put in a good main event to finish the season.”

In the AMA Supercross Lites class, the Monster Energy/Pro Circuit Kawasaki team came up short in its bid for a bi-coastal title sweep, but both Western Regional riders Jake Weimer and Ryan Morais were impressive all season long and will undoubtedly be at the front this weekend in Las Vegas.

“I can’t think of a better place to get my first win (then Vegas),’ said Morais, who was one of the most consistent riders of the season on either coast. “I’ve been right there all season long and I’m ready to get on the top step of the podium.”

Joining Weimer and Morais at Sam Boyd Stadium will be Eastern Regional Champion Christophe Pourcel and runner-up Austin Stroupe. The two riders have had a few weeks off, but are ready to come back under the full Pro Circuit tent.

“I want to win the shootout really bad,” said Stroupe. “My first goal this year was the championship and I came up just short and now my goal is to win that Toyota truck.”

A banged up Muscle Milk/MDK/KTM will head into Las Vegas this weekend with two riders representing the team’s East and West coast AMA Supercross Lites efforts.

Will Hahn ended the Eastern Regional Championship with a career-best runner-up finish in Jacksonville. Even though he’s been away from racing competition for a few weeks, he still feels like the momentum he gained in Florida will carry over into the shootout.

“I flew out to California after the last couple East Supercross rounds and have been training there with the team,” explained Hahn. “I feel really good and want a win badly. If I can get a good start in the main event I know I have a chance at topping the podium.”

Justin Brayton will represent the team for the West Coast, but is still battling through some nagging injuries he received in Seattle. Despite the pain, the talented rider mustered a fifth place finish in Salt Lake City and hopes to get out of Vegas unscathed in his farewell AMA Supercross Lites race.

“My injury is still bothering me slightly, especially my hand,” stated Brayton. “I wasn’t able to practice leading up to the Salt Lake City race but this week it has improved and I plan to ride at least three days this week. I want to do really well for the team at this final race. This is my last Lites race for the time being as I will be moving up to the 450 class at the Nationals.”

Muscle Milk/MDK/KTM’s other pair of riders, Martin Davalos and Ryan Sipes, will sit out the Vegas race in order to continue their recovery from injuries.

Tickets for the Las Vegas Monster Energy® Supercross finals are available for $63 Adult/$63 Child for Jackpot Seats and $42 Adult/$21 Child for Gold Circle Seats. Tickets can be purchased through UNLV ticket outlets, participating Yamaha dealers, online at www.UNLVtickets.com or charge by phone at 1-866-8FINALS. Each ticket serves as a free pit pass where fans can gain access to the interactive pits to meet riders, gain autographs and more.