AURORA, Ill. – In a typical season, 10 AMA Supercross class wins would solidify a championship, but that’s not the case for James Stewart, who by many is considered the fastest man on the planet. Heading into tomorrow night’s Monster Energy® AMA Supercross, an FIM World Championship, race at Seattle’s Qwest Field, Stewart has seven more race wins than rival Chad Reed, but he trails Reed by five points in the championship. While this year’s championship race is being called the greatest ever, it does resemble a handful of epic championships in the sport’s history; however, no title race has ever been filled with this much drama. 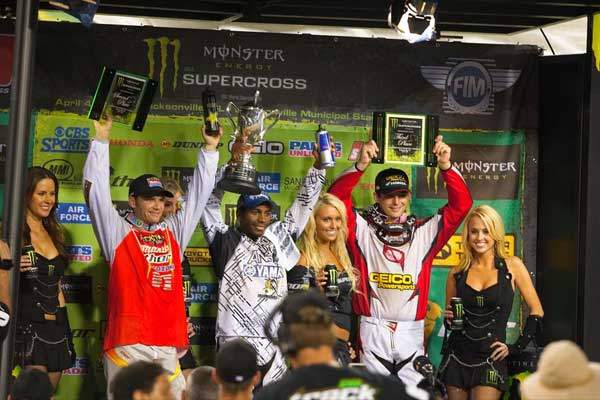 “I don't recall a title being this close, or at least not one with this much drama,” said Davey Coombs, editor in chief, Racer X Illustrated. “The personal rivalry between them (Stewart/Reed), and the fact that they both seem to find each other every weekend makes it so we don't want to take our eyes off these guys! Even when they confront each other on the cool-down lap or the podium, you are watching them, waiting for something to happen.”

Even when the perfect storm came in 2005 when Stewart moved up to the premier class to race against Reed and Carmichael, it was clear that Carmichael was the leader of the pack. He showed that by winning the title. In 2006, when he and Reed came into the final race of the year at Sam Boyd Stadium in Las Vegas tied in points, Carmichael defended his ’05 title and won the fifth AMA Supercross championship of his career before heading into retirement. 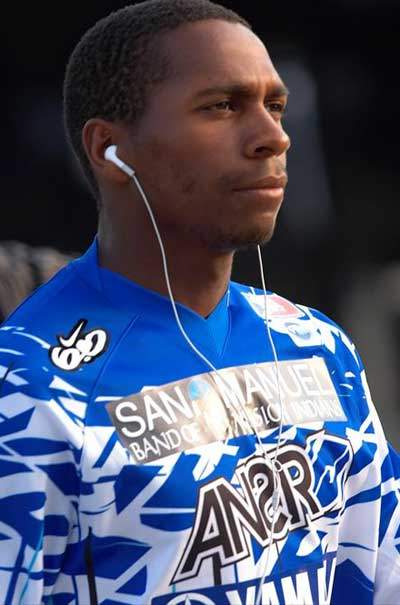 “When Ricky was in the mix, he ruled with a heavy hand,” added Coombs. “There was no real animosity with the three players, and it was generally understood that it was Carmichael's last year, so the rivalry between Reed and Stewart had yet to develop like it has.”

The Stewart/Reed rivalry also shares a different flare in that there is more to the story than their on-track battles. 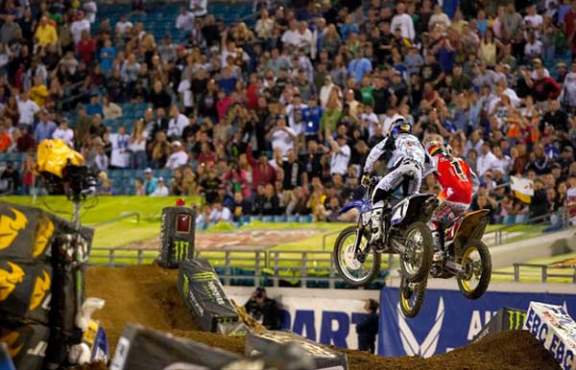 “I think what changed everything was when James took over Chad's ride with San Manuel Yamaha,” laments Coombs. “That kind of made it more personal for the both of them, as well as the fact that they are both at the top of their game now.”

Reed appears to be in the driver’s seat, knowing that just one win and two second place finishes at these three races would almost certainly give him his third AMA Supercross class championship.

“I’m extremely motivated for the last three races,” said Reed. “At the very worst, I need a win and two second-place finishes to win the title, so I will do whatever it takes to get the job done.”

Since 1974, after 35 seasons of AMA Supercross class racing, the rider with the most wins in a season has gone on to win the title 27 times.

1985: Ron Lechein had three wins, Johnny O'Mara had two wins, and Jeff Ward won the title with one win. During this year, AMA Supercross was a two-moto format.

1987: Rick Johnson had seven wins (he DNFed the opening race of the year) and Jeff Ward won the title with five wins.

1992: Damon Bradshaw had nine wins (a record back then) and Jeff Stanton won the title with three wins.

In 35 seasons of AMA Supercross class racing, only seven times has a rider won 10 or more times in a season. In each of those seven years, the rider that has won 10 or more races has gone on to win the championship.

“I think this weekend off came at a great time,” said Reed. “It has given me time to work on a few things with the Rockstar Makita Suzuki RM-Z450 that I believe will help a lot and make me a little more comfortable at race pace.”

“The advantage right now is momentum, and Stewart seems to have that, but he's also much more inconsistent than Reed -- his aggressive riding style can sometimes lead to mistakes, which we saw a couple of times recently,” said Coombs. “Right now, Stewart controls his own destiny: If he wins out, he wins. But if Reed gets what he's waiting for -- another Stewart mistake -- in one of these last three races, he'll be in the driver's seat. Right now, I think it's still a toss-up!”

During this off weekend, Monster Energy Kawasaki is not slowing down. With Ryan Villopoto expected to race in Seattle, along with Billy Laninovich still trying to increase his fitness level, the team has been at the test track every day working to dial in each riders’ Kawasaki KX450F.

“I really can’t wait to be back racing,” said Villopoto. “It has been hard watching the last few rounds on TV. I’m working hard to get back. I’m still having tests done to make sure everything is where it needs to be so I can race in front of my hometown fans in Seattle.”

Meanwhile, Laninovich is coming off of a top-10 finish and is excited about the rest of the season.

“Last week was really good,” said Laninovich. “I know I can do better though, so I’m going to keep working. I rode most of the week, but I’m going to relax a little this weekend. Once Monday comes around though, it will be back at work to try and stay in the top 10.”

In the Western Regional AMA Supercross Lites class, Monster Energy/Pro Circuit/Kawasaki’s Jake Weimer and Ryan Morais are currently second and third respectively in the points standings and both riders want to keep the pressure on as they return to racing.

“It’s been a long break,” said Weimer. “It hasn’t been easy though. I think I have been training harder these last few weeks than I did leading up to the season. Right now the championship is right there and I want to take it. It’s going to be tough, but I’m ready to put up a fight.”

Ryan Dungey recaptured the overall championship points lead in the Western Regional AMA Supercross Lites class at the race in San Diego back in February. With two races remaining, Dungey hopes to win his first Lites class title after having won three out of six races this year.

“I had some cool stuff lined up during our down time, but eight weeks is a long time not racing – two months,” said Dungey. “It’ll be nice when we start up again. I’m really looking forward to coming back for the race at Seattle.”

Morais has also been working hard over the break, but in the last couple of days he is also trying to play weatherman.

”I’m kind of hoping for some rain in Seattle,” said Morais. “I like mud races and I think I could really have an edge if the track gets sloppy. Either way, I’m going to be prepared to get my first win.”

Factory Yamaha’s Josh Hill continues to struggle with the injured shoulder he started the season with but managed to finish a season-best fourth place at Jacksonville. As the season winds down, Hill still has his sights on making it to the podium in ’09.

“This season, Josh started out with a shoulder injury and has been battling back since then,” said Yamaha Team Manager Jim Perry. “Being competitive each weekend with a shot at the podium would be a nice way for us to finish the season.”

Hill’s teammate Broc Hepler, who is a rookie in the AMA Supercross class, missed the first six races of the season with a shoulder injury, but managed to score his first podium finish in New Orleans. Since then, he’s struggled to put in consistent finishes. Following New Orleans, he finished 14th in St. Louis, 17th in Toronto and 11th in Jacksonville.

“Really, (it is) just the racing roller coaster,” added Perry. “Only Stewart and Reed have been consistent all season. Broc is still a rookie in the premier class. Missing six events at the start of the season has not helped with his consistency.”

Mike Alessi has spent much of the 2009 season trying to recover from injuries he sustained last year. He’s been quite successful having earned numerous holeshots this year and also picked up his first-ever AMA Supercross class podium. He hopes to recreate that experience at Seattle.

“I’m really looking forward to the Seattle race,” said Alessi. “It was nice to have a few days off to rest but I’m excited to get back to it. Going into Seattle, there’s a good chance that there will be rain and that it’ll be a mud race. I just want to keep a positive attitude and be safe.”

While Trey Canard did win the 2008 Eastern Regional AMA Supercross Lites class championship, his 2008 campaign thus far is one that he’d rather forget. With two races remaining the GEICO Powersports Honda rider hopes to finish strong.

“Since the San Diego race, I have been training and riding mainly for the upcoming outdoors series, but switched it back recently to focus on final two supercross races. Everything’s going good. I want to go out at the final events and race like I know I can, getting good finishes. It’s been a rough season for me so I am definitely looking to finish out on a high and build momentum to carry into the outdoors competition.”

With the intense competition between Stewart and Reed at the front of the pack, Honda Red Bull Racing’s Andrew Short is quietly putting in the best season of his career.

“I am pretty happy with the way my season has panned out,” said Short. “Consistency is key to staying amongst the top riders in the series and I have pretty much been there all season long. Finishing fifth at Jacksonville added another 16 points to my series points tally and I have a fairly strong hold on third place in the championship. With only three races remaining, and after scoring two podium finishes this year for the Honda Red Bull Racing team, I intend on throwing everything I left into the upcoming Seattle, Salt Lake City and Las Vegas events.”

If it wasn’t for bad luck, Ivan Tedesco wouldn’t have any luck at all. After starting the main event in seventh place at Jacksonville, a down rider caused him to crash and remount near last place. He’s currently sixth overall in AMA Supercross class points standings and is five points behind fifth-place rider Kevin Windham.

“I didn’t have much luck fall in my favor at Jacksonville. I got a reasonable start in the main and was in about seventh place, when a rider went down right in front of me, leaving me nowhere to go and I became entangled in his crash. It took a while for me to pull my bike clear and I basically had to rejoin in last place. I raced back to 13th position but it was definitely a tough result to score in front of my home crowd. I’m going to regroup and head to Seattle ready for a new challenge. My crew on the Honda Red Bull Racing team has been very supportive all season long and I want to finish the season out on a high for them.”

Tickets are available at www.SupercrossOnline.com, by phone at 800-745-3000, the Qwest Field Box Office, Ticketmaster outlets, and www.ticketmaster.com. Club Level seats are $45; Mid-level seats are $25 for adults and $10 for children; Treadhead Seats are $10. All seats are $2 more on the day of the race. Practice and qualifying begin at 12:30 p.m. and racing begins at 7:00 p.m.