AURORA, Ill. – Earlier this year, Team San Manuel Yamaha’s James Stewart, of Haines City, Fla., put together a seven-race win streak after starting the season in 19th place. It’s been a year of playing catch up for Stewart, who is the 2007 AMA Supercross class champion, and his win at Jacksonville Municipal Stadium brought him within five points of current leader Chad Reed. This Saturday as Monster Energy® Supercross, an FIM World Championship, returns to Seattle’s Qwest Field, he has his sights on his third consecutive win and a shot at closing Reed’s lead to just two points. 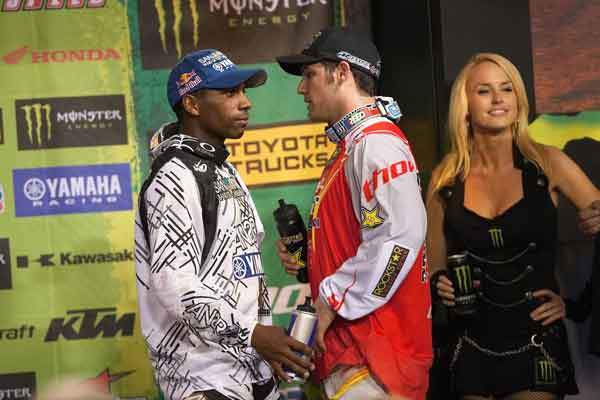 Reed and Stewart will face off once again at Qwest Field this Saturday
Photo Credit: Frank Hoppen

At the last AMA Supercross class race, Stewart earned his 10th win of the season at the inaugural Monster Energy® Supercross race at Jacksonville Municipal Stadium. The win was pivotal in Stewart’s pursuit of his second AMA Supercross class championship. Rockstar/Makita Suzuki’s Mike Alessi, of Victorville, Calif., started the AMA Supercross class main event by grabbing the holeshot followed closely by his teammate Reed. Reed moved past Alessi in turn two and secured the lead while Stewart snuck into second place. 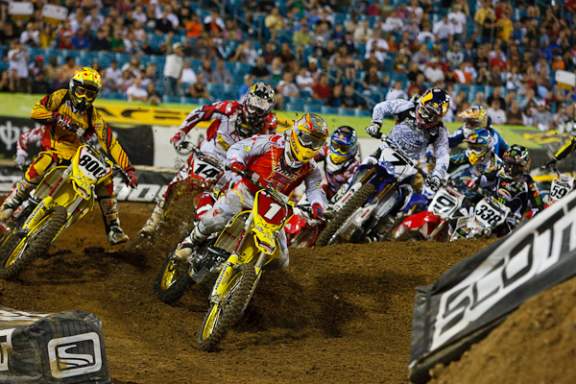 A solid start for Reed in Jacksonville kept him up front for most of the race
Photo Credit: Brian Robinette

Stewart tried to set Reed up in a few different sections but the Australian held his ground. Stewart stalked Reed for 13 long laps before he made a pass on the defending champion. Reed answered back and took over the lead on the same lap. Just one lap later, Stewart re-passed Reed and rode to his second career double-digit win season. Reed finished second and GEICO Powersports Honda’s Kevin Windham, of Centerville, Miss. brought home third. 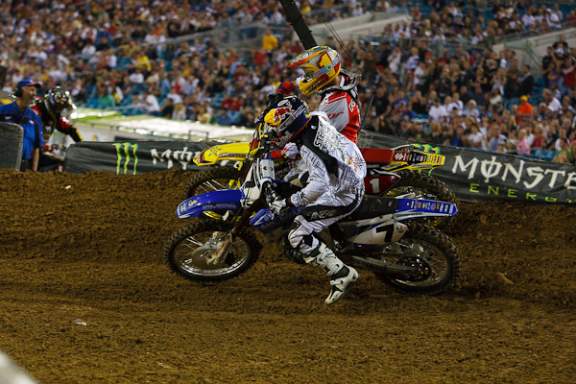 While battling for the lead in Jacksonville, Stewart and Reed collided in the air over the massive triple jump. Following the race, Reed questioned Stewart’s tactic.

”I learned a lot tonight,” said Reed. “I learned how he wants to play the game. When you jump across someone in the air, that is not cool, and I don’t want to play like that. I told him that if he wants to be dangerous and crazy and try and put me in the hospital like he did my teammate, I will do it too. He rode solid, but I don’t appreciate mid-air collisions on triples. I’ve have never given up at any point of my career, and I am going to keep fighting all the way down to Las Vegas.”

Stewart admits the situation was scary.

“It was a fun race, and obviously I came out on the better end,” said Stewart. “We did get close over the triple and that was scary. He went to the inside, and I was on the outside. I almost went down and he almost went down. That was not fun.” 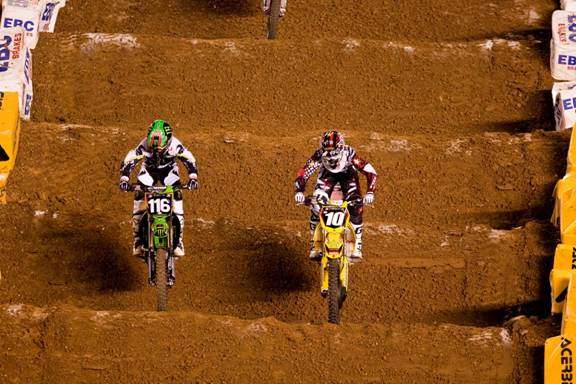 Dungey and Weimer are knotted at three wins apiece heading into this weekend’s race. The two front runners are the only riders in the class to earn victories in 2009. Weimer’s teammate Ryan Morais is in third place, trailing by nine points.

Honda Red Bull Racing’s Andrew Short, of Smithville, Texas, won the $1,500 Progressive Holeshot Award to start the AMA Supercross class main event, but Windham quickly passed him and moved into the lead. Reed came into Seattle last year 13 points ahead of Windham and crashed in turn one, forcing him to start in last place.

On lap two, while leading, Windham suffered a mechanical malfunction when a banner got tied up in his back wheel. He stopped his bike and removed the banner from the rear wheel, dropping back to sixth place. Windham charged back through the field and re-captured the lead on lap 17. Reed charged his way to second place with a last-lap pass on Short.

“I rode great tonight,” said Windham last year from the podium in Seattle. “I wish I came away with more points, but that’s how it goes. I am excited to go to Las Vegas next week. It’s going to be a great race.”

Tickets are available at www.SupercrossOnline.com, by phone at 800-745-3000, the Qwest Field Box Office, Ticketmaster outlets, and www.ticketmaster.com. Club Level seats are $45; Mid-level seats are $25 for adults and $10 for children; Treadhead Seats are $10. All seats are $2 more on the day of the race. Practice and qualifying begin at 12:30 and racing begins at 7:00 p.m.