AURORA, Ill. – With one night remaining on the 2009 AMA Arenacross Series schedule, Friday night at the Bank of Kentucky Center turned into an evening of champions as both the AMA Arenacross and AMA Arenacross Lites Midwest Regional Championships were handed out in Highland Heights, Ky. Mahindra Tractors/Tuf Honda’s Jeff Gibson, of Westerville, Ohio, raced to his series-leading sixth victory of the season en route to finalizing his run at the premier class title. In the AMA Arenacross Lites class, Orient Express Suzuki’s Dave Ginolfi, of Lake Hopatlong, N.J., rode safely to take his first career Arenacross title. 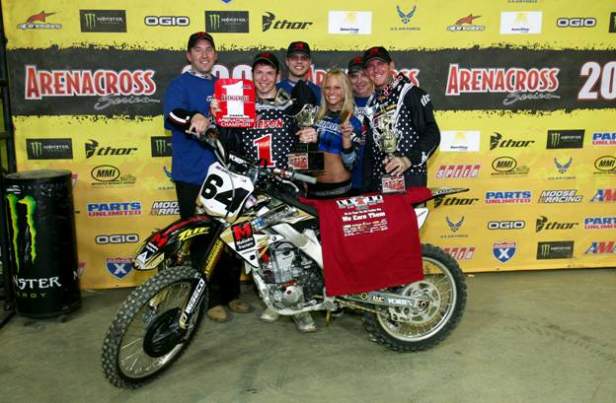 Gibson has been the picture of consistency throughout the entire 2009 season. The Ohio rider could always be found inside the top 10, with a season-worst finish of 11th place. He kicked-off the season with seven consecutive podium finishes, including two victories in that stretch. Gibson would continue his impressive run by garnering four additional wins. Once he moved into the points lead, Gibson never relinquished his hold on the top of the standings. The championship also marks the third straight title for the Tuf Honda team with its third different rider during the three-year span.

On Friday night, the veteran competitor blasted into yet another great start, grabbing an early advantage over his competitors and refusing to look back throughout the 25-lap main event.

“This is just awesome,” exclaimed Gibson. “It’s been a long season and I’ve been fortunate to have things work out for me. My bikes have been amazing all season and I could not have accomplished this without the help of my Tuf Honda team. I’m proud to be an Arenacross champions and it’s a pleasure to be part of such a fantastic series.”

In the AMA Arenacross Lites main event, Reynard Modifications Suzuki’s Cory Green, of Nowata, Okla., outlasted Western Regional Champion Tyler Medaglia, of Ottawa, Canada, and his GPF/Babbitt’s Kawasaki. The Suzuki rider was able to get a good start out of the gate and piece together 20 solid laps en route to his third overall win of the 2009 season. GPF/Babbitt’s Kawasaki’s Kyle Brown, of Lake Odessa, Mich., brought home third.

Ginolfi, who held a virtually insurmountable 37-point entering the evening, rode smart throughout the main event. The New Jersey native was impressive throughout the regional championship and avoided trouble to assure himself of a solid top ten finish and the coveted championship.

With the title decided, the race is on in the standings for second place. Currently, Triple Effect Kawasaki’s Brock Sellards, of Sherodsville, Ohio, holds onto the runner-up spot by five points over Johnson.

Night two of the Highland Heights Arenacross continues tomorrow at 7 p.m. from the Bank of Kentucky Center.