In honor of St. Patrick’s Day, the top three fastest lap times of the AMA Supercross Lites main event in New Orleans came from riders aboard green motorcycles. Winner Austin Stroupe was the quickest on his Monster Energy/Pro Circuit Kawasaki, his 52.951 being the only 250F time in the 52-second range. Canidae/Motosport Kawasaki’s Branden Jesseman continues to show improvement, and the Pennsylvania native really adapted well to the Louisiana dirt, as he won his heat race and finished a solid runner-up in the main event. Finally, current points leader Christophe Pourcel rounded out the top three fastest lap times with a 53.250. Scroll down the view the fastest laps of the entire Lites main event field. 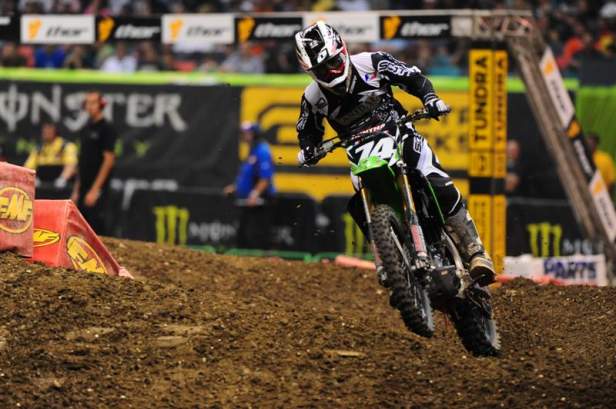 The fastest rider in Louisiana last Saturday night was San Manuel Yamaha’s James Stewart, who regained his winning form after two mistake-filled races on the Monster Energy AMA Supercross tour. Stewart had the fastest main event lap time (51.017), which came on lap nine. Not surprisingly, Rockstar/Makita Suzuki’s Chad Reed was the second fastest in the main, his 51.918 coming on lap six. Rounding out the top three was Ryan Villopoto, who recorded a 52.889 on his way to a ninth-place finish. Check out the entire field’s fastest main event lap times below.