"Well, I've got one foot on the platform.
the other foot on the train.
I'm goin' back to New Orleans
To wear that ball and chain."

Hello, everyone, and welcome to the Rev Up. It's been said that the devil visits Las Vegas, but he lives in New Orleans. The lyrics at the top there, are, of course, from one of my all-time favorite songs, "The House of the rising Sun," by The Animals.

The song is one of probably thousands of tales of plight nestled in the clutches of one of the oldest cities in America. Stuffed full of live music, extremely diverse culture, and of course the grand daddy party of them all, Mardi Gras, New Orleans is quite the joint. As we sit mired in the madness of the 2009 Monster Energy Supercross Series, what better place to take the boys than "The Big Easy?" New Orleans is back on the schedule for the first time since early in the decade, which means this is the Crescent City’s first chance to show the supercross world how it’s doing in these post-Hurricane Katrina comeback.

I smell jambalaya and I hear trumpets howling down the alley. Who is ready for some more supercross this Saturday night? It's weekend time again, baby! Time to get fired the hell up. Time to kick the tires and light the colored Monster Energy fires. Here comes the Rev, Naw'lins style.

Okay, I'm taking it in the teeth about my prediction that C-Pour would struggle acclimating to the Daytona Dirt. The French kid floated like le Butterfly and stung like JMB. #377 can pretty much walk his way to the #1 plate now. Well done, man. Coming into this weekend I think Stroupe is still the man to beat, but he'll have to do more than win to have any hope for championship glory. There is a hornets’ nest behind them though, and I'm not letting go of my pre-season pick from Nico Izzi to win one of these. It's been the same old story for Nico: "Bad start, then charge to the front." He's almost reaching a Mike LaRocco-level of starting in a hole.

And I have to send a shout-out to the MDK/KTM boys for posting two top-fives last weekend and almost winning the race. Since Matthes always brags about texting Stewart, I figure I'll throw in that I was IM'ing Wil Hahn, and do so pretty regularly. He said that starting line thing where he collided with Blake Wharton was the weirdest thing that had ever happened to him, but he was stoked on his ride in the main was headed to New Orleans, loaded for bear. Got get'em Wilbur!

In motor sports, there are guys that do things the easy way and the hard way. Compare the careers of Jeff Emig and Jeremy McGrath.  Emig's wins and championships all seemed to have a huge amount of drama around them, and always seemed to come down to the wire. McGrath has more runaway victories and wrapped up his titles earlier than everyone (sans the outdoor GOAT, who never went into a  motocross final without having clinched it all).

I'm trying to fit James Stewart somewhere in the middle of those two as far as his career has gone so far. All things considered, #7 should be dancing away with the championship right now but, two big, BIG, mistakes have cost him dearly; his seven-straight wins are clouded by a 19th at the opener, a second at Indy, and an up-off-the-canvas 7th at Daytona. (Yes, he crashed in all three races he lost, if you’re keeping score at home.)

Now there are seven rounds to go and James is 11 points behind the ever-steady Reed. Stewart can gain three points a race if he wins and Chad gets second. So if he gets back up front and stays there, James can retake the points lead by his home state round in Jacksonville, Florida. That will give him three more rounds to either pull away—like MC—or do things the hard way—like Fro often did.

You can bench race and strategize till you're blue in the face, but there is one certainty: It will get ugly now that the championship is on the line. No more friendly nods during track walk. No patty cake on the podium. The big money and even bigger #1 plate is on the line, and rest assured it's going to be brass knuckles and flashlights till Vegas is through. Reed has proven himself a battler, and now, after taking punches from Bubba for seventh straight rounds, he’s bounced back to snatch the last two rounds and get back out front on the judges’ scorecards.

Yes, there is a lot of action behind Chad and Stew—um, who was that totally smooth, fast guy, leading almost the whole way, wearing J-Law’s gear? Seriously, it’s scary to think how fast that kid could be if he can stay focused for, like, a month—but the big drama is for the top spot.

So, on to New Orleans. If you’ve never been and want to know what it’s like, check out one of my favorite books ever, "A Confederacy of Dunces" by John Kennedy Toole. A Pulitzer Prize winner, it's the most witty, hilarious book I've ever turned pages with. There is a statue of main character Ignatius J. Reilly at the Canal Street entrance of the Chateau Sonesta Hotel. Google it, then buy the book. Trust me. (Other favorite memories of New Orleans is the scene in Easy Rider, where they wander around that cemetery with a head full of acid.)

On a serious side, we all know about the mess Hurricane Katrina left behind. They told us back in grade school that New Orleans sat beneath sea level and "some day, a hurricane could wipe out the city…." I still remember the evening I watched the levy fail and the horror that followed. Well, check this out. One Industries (the folks that keep the wheels on this wagon) have teamed up with Hart & Huntington to put special gear on their riders to raise awareness about the "Make it Right" foundation, that support Hurricane Katrina relief. (For more information about The Pink Project and Make It Right Foundation, please check out www.makeitrightnola.org.)
There is a house in New Orleans, they call the Louisiana Superdome. It's been the ruin of many a poor boy, but if you go see the show this weekend, you won't be one! 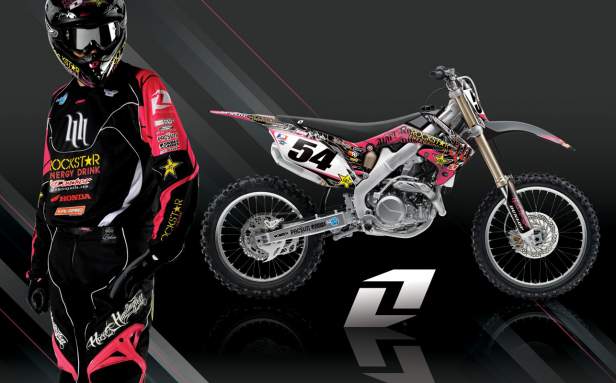