AURORA, Ill. – Just one year ago, 67,429 fans packed the Georgia Dome as Monster Energy® AMA Supercross, an FIM World Championship, made its annual trip to the legendary Atlanta venue. A crowd of the same magnitude is expected as San Manuel Yamaha’s James Stewart leads the world’s best riders into Atlanta after scoring his sixth-consecutive race win Saturday night at San Diego’s Qualcomm Stadium. 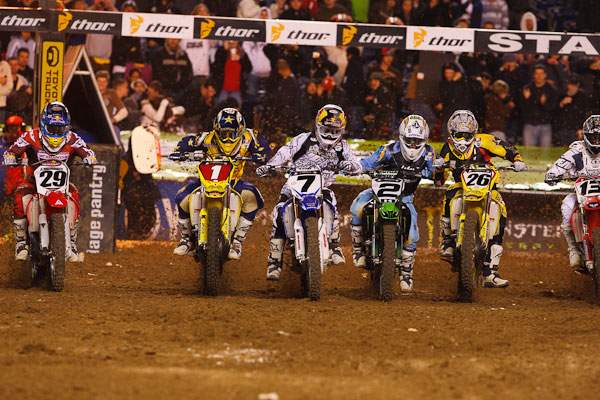 The Eastern Regional AMA Supercross Lites championship prepares for its second race this Saturday, followed by a six-race showdown leading to the crowning of a champion. In the class’ opening race from Houston’s Reliant Stadium, Monster Energy/Pro Circuit/Kawasaki’s Christophe Pourcel, who is from France,  grabbed the win to lead the points heading into the Georgia Dome. 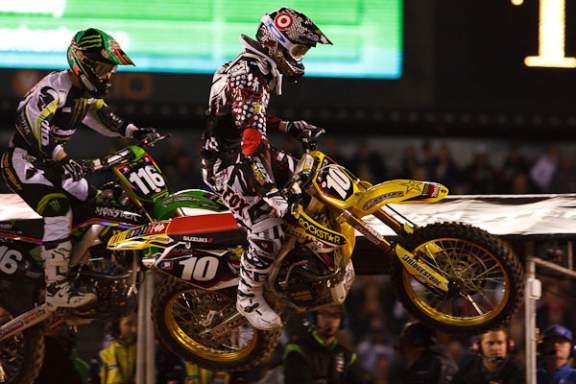 Stewart, the 2007 AMA Supercross class champion, has been on a tear since starting the season 23-points out of the points lead. Since that forgettable evening in Anaheim, Stewart has erased the huge deficit and moved into the points lead over Rockstar/Makita Suzuki’s Chad Reed, of Tampa, Fla.  While Reed has been consistent, finishing second for the past six races, he has been unable to pick up a win this season. 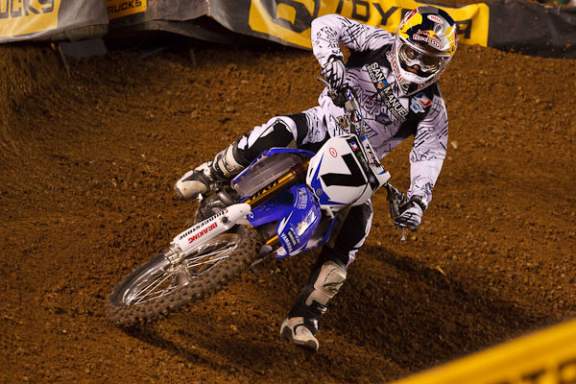 Last Saturday night Rockstar/Makita Suzuki’s Mike Alessi, of Victorville, Calif., grabbed the holeshot in the 20-lap main event with Stewart and Reed in tow. The class’ top two riders quickly made their move around Alessi and gapped the field. Reed kept pace with Stewart for a couple laps, but the Yamaha rider slowly pulled away, leading flag-to-flag. 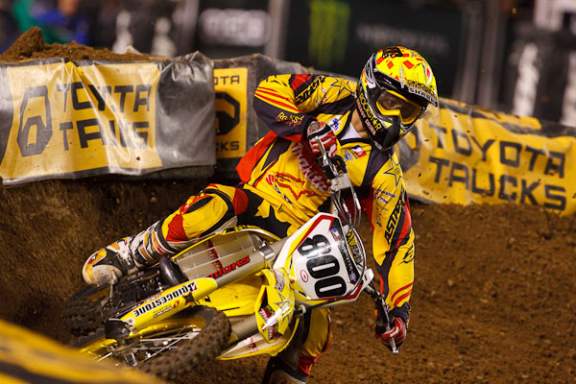 Mike Alessi continues to run up front in the early stages of the race
Photo Credit: Brian Robinette

“The track was definitely tough,” explained Stewart. “I just had some good luck. The track was slick, but, man, this San Manuel Yamaha was awesome. To come back where we were at, 23-points back, it’s just amazing. (San Diego) is special to me - it gave me my first victory in 2002 so I’ve always had a soft spot in my heart for the city.”

Reed held off the late charges of both Honda Red Bull Racing’s Andrew Short, of Smithville, Texas, and Monster Energy Kawasaki’s Ryan Villopoto, of Poulsbo, Wash., to capture second, while Short edged Villopoto at the line for third. 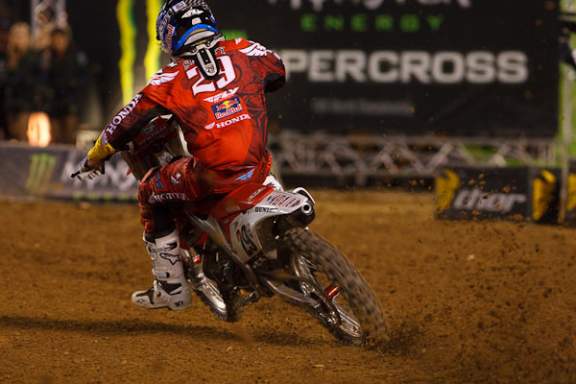 “I got great starts and I was there,” stated Reed. “I just wasn’t fast enough. James rode awesome and I want to thank the team for being patient with me all day. I’m happy to be second and once again San Diego was good to me. I want to thank my team and all my sponsors. We’re just keeping it consistent.”

Dungey led every lap of the Western Regional AMA Supercross Lites class main event and carries a two-point lead into a seven-week break for the championship. Monster Energy/Pro Circuit Kawasaki’s Ryan Morais earned a runner-up finish while his teammate Jake Weimer worked his way up to third.

“I’m really pumped,” said Dungey. “I think I really rode an awesome race from start to finish. Sometimes when you’re given that kind of opportunity you need to take advantage of it and I think I did that tonight. I just want to thank my team, Rockstar/Makita Suzuki for everything.”

Atlanta provided a memorable night of action one year ago when Red Bull Honda’s Davi Millsaps, of Cairo, Ga., earned his first career AMA Supercross class victory in front of thousands of family and friends at his home race. Millsaps took advantage of a fall by Reed and led the rest of the way.

“I don’t like to take a win like this, but a win is a win,” said Millsaps from the podium last year. “I had a lot of friends and family here tonight, so winning in front of them is huge, especially my first win in this class.”

In his first career supercross race as a professional, Trey Canard made it a clean sweep for Honda as he led all 15-laps of the AMA Supercross Lites class main event last year. Defending Western Regional AMA Supercross Lites champion and season favorite Ryan Villopoto crashed twice, beginning what would be a frustrating season.

“I do not know what to say right now,” said Canard after his memorable first win last season. “I have waited my whole life for this, and to get the win means so much to me. I had a great heat race and was ready for the main.”