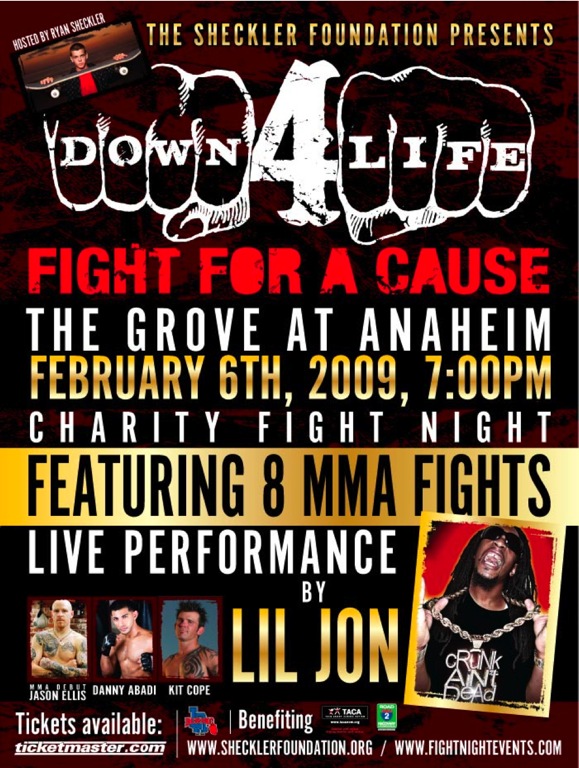 Anaheim, CA -  X Games two time gold medalist and active philanthropist, Ryan Sheckler, will host Down for Life – Fight for a Cause. This Friday night fight supports the mission of his non-profit organization, The Sheckler Foundation. The event will feature an 8 bout professional MMA fight card and will take place at The Grove in Anaheim, California on Friday, February 6th at 7:00pm, the night before the Monster Energy Supercross Series kicks off.  The evening will also feature a performance by Lil Jon.

Australian professional skate boarder and radio host Jason Ellis (making his professional MMA debut) along with professional MMA fighters Kit Cope (4 time Muay Thai champion) and Danny Abbadi (The Ultimate Fighter) will be heading into the ring to raise money for charitable causes supported by The Sheckler Foundation. Charities benefiting from this contest include Road 2 Recovery, which provides financial assistance to seriously injured motocross and supercross athletes and their families and Talk About Curing Autism, TACA, which provides information, resources, and support to families affected by autism.

“I like raising money, but I love giving it to worthy causes, even more. I believe there will be a cure for cancer in my lifetime.” -Ryan Sheckler

The Sheckler Foundation is happy to join forces with Fight Night Events, LLC to make this spectacular event possible.

About Ryan Sheckler
Ryan Sheckler became a professional skateboarder at the young age of thirteen, going on to win first place finishes at the Gravity Games, the Vans Triple Crown, Slam City Jam and the X Games; his success in the X Games, winning 2 gold medals, made him the youngest participant ever to take it all. At just 18 years old, Ryan has turned his name into a franchise, starting his own merchandising line, Sheckler Merch., as well as bringing his life to television on the MTV Reality Show “Life of Ryan” in 2007, 2008 and 2009.  Sheckler is a 3 time AST Dew Tour over all Skateboard Park Champion. www.RyanSheckler.com

About The Sheckler Foundation
The Sheckler Foundation was founded as an avenue for Ryan Sheckler, his family, friends and business associates to give back to the community and industry that they are so grateful to. The community is mostly comprised of children and their parents, who as his fans, buy his products, attend his events, and watch his show. The industry is comprised of numerous action sports athletes and companies who have helped Ryan achieve monumental success. It was his ultimate desire to form a foundation that could contribute to many causes that directly benefit and enrich the lives of children. It is also his desire to support and fund programs that help action sports athletes who are injured in their line of work. www.ShecklerFoundation.org

Thanks for the support and we hope you can make it!