Results Archive
Motocross
Hangtown
Articles
450 Results
Full Results
250 Results
Full Results
GNCC
The Mountaineer
Articles
Overall Results
Full Results
XC2 Pro Results
Full Results
MXGP of
Sardegna
Articles
MXGP Results
Full Results
MX2 Results
Full Results
Live Now
GNCC
Burr Oak
Articles
Live Now
Motocross of Nations
Articles
Upcoming
MXGP of
Germany
Sun Oct 3
Articles
Upcoming
GNCC
Buckwheat 100
Sat Oct 9
Articles
Upcoming
MXGP of
France
Sun Oct 10
Articles
Full Schedule
There were a total of five riders out of both classes that were able to dip into the 49-second range at this past weekend’s San Francisco supercross, with San Manuel Yamaha’s James Stewart topping them all with a 49.420. However, the big surprise was who was second-fastest in the AMA Supercross class. All season it’s been James Stewart or Chad Reed flip-flopping for one and two, but at San Fran it was Anaheim 1 winner Josh Grant scoring the second-best time aboard his JGRMX/Toyota Yamaha. His 49.815 came on lap seven on his way to a fourth-place finish, helping him to maintain third in the series standings. Rockstar/Makita Suzuki’s Chad Reed rounded out the top three in the AMA Supercross class, following by Monster Energy Kawasaki’s Ryan Villopoto and Rockstar/Makita Suzuki’s Mike Alessi. Check out fourth through tenth, as they were all within .7 seconds of each other. Check out the rest of the top 20 below: 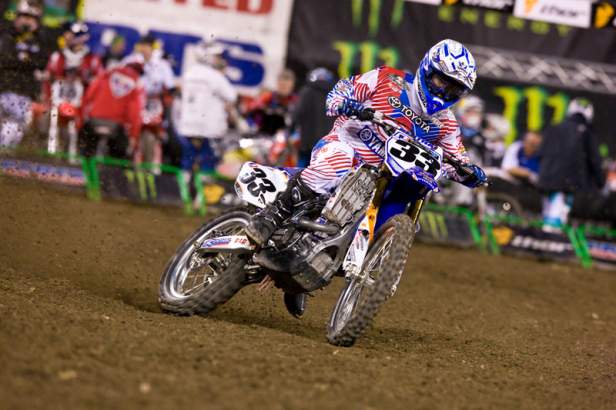 Rockstar/Makita Suzuki’s Ryan Dungey continues his impressive run toward the Western Regional Lites Supercross Championship, and again he was the fastest rider on a 250cc machine, recording a 49.592 to top the field. San Francisco winner Jake Weimer was only a few clicks behind, and he was followed by a pair of Hondas; GEICO Powersports Honda’s Trey Canard and Troy Lee Designs Honda’s Chris Blose. A big surprise was Justin Brayton’s lackluster lap times on his Muscle Milk/MDK KTM. Brayton, who came into the season a true title contender, could only muster the eighth-fastest time in SF on his way to a fourth-place finish. Brayton also sits fourth in the standings.