As the Monster Energy/AMA Supercross Championship heads to the Lonestar State, the Western Regional Lites riders will take a week off while their eastern counterparts prepare for the opening round of their series inside Reliant Stadium. So, for this week’s Smith Optics Track Walk, we gave West Regional points leader Ryan Dungey of the Rockstar/Makita Suzuki team a call to walk us through this week’s track. 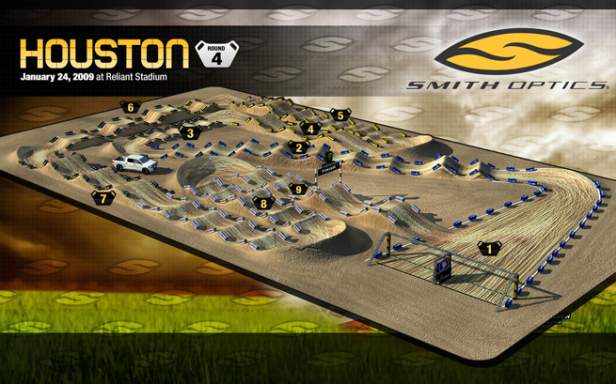 1.) “On the start, I’d choose anywhere on the left-hand side, probably three or four gates to the left of the box. That way, you set yourself up in case you don’t get such a great start and you can sneak around the inside instead of getting pushed out.”

2.)“It looks like you’ll probably either be double-triple-triple-single, or maybe even triple-triple-triple. If you do triple through the entire section, that’d be the fastest. But if you double in, then you’d triple triple, single. Judging on this picture, it looks like you got a pretty good run, so if you could triple in off the start that would be ideal. You definitely have a lot of different options.” 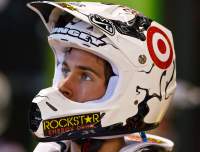 3.)“You then make a right-hander and these don’t look like whoops. It looks like it’s going to either be double-triple or triple-double. It’d be good to triple and then double to the inside and shoot for the big triple if you could. That would be ideal, to sneak around the inside and seat-bounce it.”

4-5.)“You’ve got a standard triple here into the left-hander and then a set of whoops. It looks like there’s a jump onto a table and then a couple more whoops—that’s different, it’s pretty cool. Just do the whoops like normal and then drop down before the jump, or try to jump over the big jump and just skim the whoops on the other side.”

7.)“Hit the big triple and then, I’m not sure how big they’ll be, but if they’re small enough you could quad all the way into the corner. I’ve seen that before, I think in 2007 in Sam Boyd Stadium. If not, probably try to triple to keep your momentum going, and jump into the corner.”

8.)“After this left-hander, it looks like a steep wall, but it would be cool if they made it where you could triple up over that big one, but I doubt it. If it’s a wall, then just double, take your time over the wall, and double out. But if you could, triple in over that tall one and triple out.”

{LINKS}9.)“Here’s a right-hander, a little double, then over the finish line. After that, make a straight line into the first corner. I know they’ll probably be landing off the finish and just try to make a nice arc all the way around, whether it’s going to the inside or to the outside. They’ll probably be swinging pretty wide to keep the momentum up.”