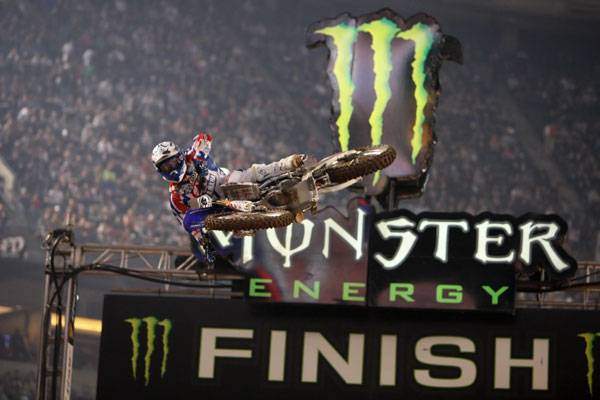 “Going into A2, I feel really good,” said Reed. “I need to work on my starts, get some holeshots, and try to get out front to ride my own race. I feel like my lap times and my riding and everything are starting to come together. There are always little bits and pieces that you can work on, but overall we have a great package with the Rockstar/Makita Suzuki RM-Z450, and I feel really content and happy with the progress I’ve made in the Iast year. We’ll be challenging for the win every weekend for sure.” 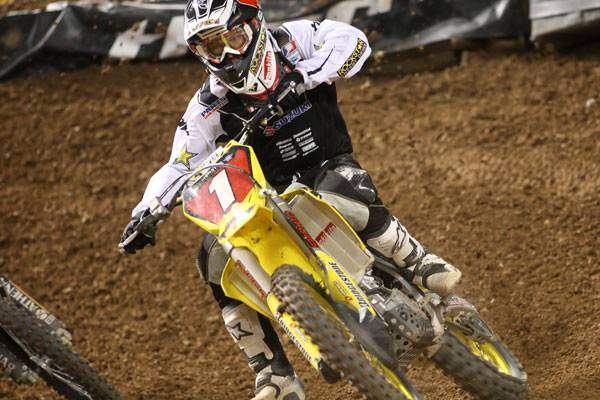 As Mike Alessi continues to recuperate from off-season injuries, the California rider continues to make progress. In the first two AMA Supercross races, he’s carded two 11th-place finishes and is in 10th place in the overall championship points standings.

“Right now, I’m focusing on getting the bike a little more how I like it, because the biggest thing that I’m lacking is that I haven’t put in much time testing the Rockstar/Makita Suzuki RM-Z450 because of my injury from last September,”  added Alessi. “Going into Anaheim 2, I’m just going to keep working on the bike and try to keep progressing every week, trying to get a little more speed and making my way back to the top five.”

Two races into the Western Regional AMA Supercross Lites class season, Dungey has taken over the lead in the points chase.  The young rider overcame adversity to finish third at the first Anaheim race and he won last week’s main in Phoenix. 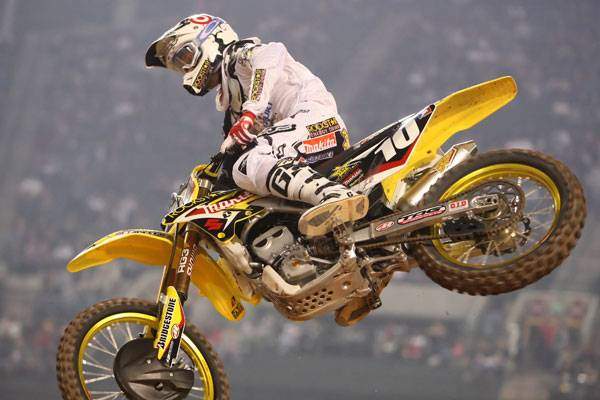 “I think taking it one day at a time is important,” said Dungey. “I had a few problems at Anaheim 1, but we got it together and worked as a team and ended up on the podium. Now, I’ve got the points lead but it’s too early to tell anything, and it’s not over ‘til it’s over. So the way I’m looking at going into Anaheim 2 is that we’re all tied still. I’m just going to do what I do and have some fun this week with the Rockstar/Makita Suzuki RM-Z250, and maybe go to the golf course one day.” 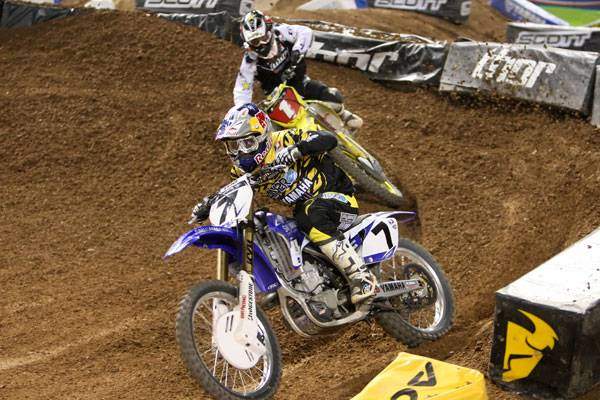 AMA Supercross rookie Cody Cooper, of the JGRMX/Yamaha/Toyota team is still struggling during is adjustment period to the more technical supercross tracks in the U.S. The New Zealand native is teammates with points leader Josh Grant, so he can use his team resources to make the 2009 season successful.

“I crashed in the second practice and banged up my knee,” said Cooper. “I went to the Asterisk Mobile Medical Unit and they x-rayed it. They said if I wanted to try and ride I could. I went to the line for the heat race, but the pain turned out to be more than I could bear so I pulled off after the second lap.  I felt like I had to go out and try, or I would have always wondered if I could have gotten through it afterward.”

“I am really proud of Josh and the entire team,” said team manager Jeremy Albrecht. “Our goal for this year is to be top five every weekend and we got third, I am very happy with our results.”

“Josh (Grant) did a great job backing up his performance last weekend,” said team founder Coy Gibbs.  “He rode well all day and he was on the podium again.  I am also proud of Dean Baker, who heads up our engine development program.  We place a lot of effort in that area and its helping Josh get some really good starts.” 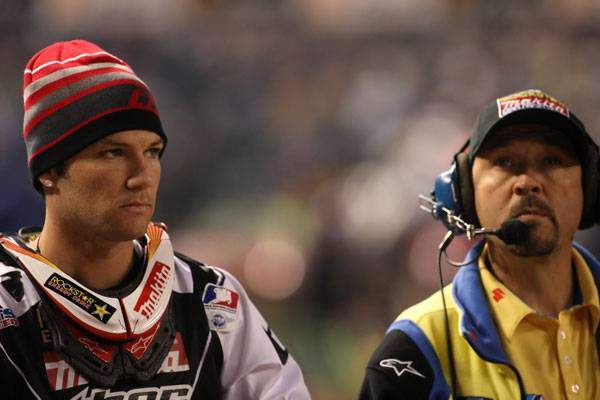 Chad Reed Needs to Focus This Weekend if he Wants to Pick up his First win This Weekend
Photo Credit: VitalMX

Monster Energy Kawasaki comes home for the second of three races at Angel Stadium. The Irvine-based squad is looking for its first podium of the season with riders Ryan Villopoto and Timmy Ferry. At the first Anaheim race, both riders finished in the top five and both are poised to climb up on the podium.

“I’m riding well right now,” said Villopoto. “I just need to get better starts in the main event. I’m going to work a lot on starts this week and get out of the gate better. I think we can get a good result this week.”

Ferry is headed back to Anaheim and is fourth in the championship standings. Coming off a ninth-place finish in Phoenix, Ferry is staying on the West Coast to get as much riding time as he can before Saturday.

The Monster Energy/Pro Circuit/Kawasaki team is looks to continue its run at the front of the AMA Supercross Lites class. Last week in Phoenix, Jake Weimer got the holeshot and led early in the event. After a fall in the sand section, he regrouped to finish fourth. His teammate Ryan Morais rode a patient race to finish third for his second podium finish of the season.

“I’m shooting for the box again,” said Morais. “I would love to get my first win, but I’m not going to go out there and ride over my head and risk crashing and throwing away points for the championship. I want to win one for sure this year.”

Despite the setback in Phoenix, Weimer is ready to get back on the top step of the podium this week.

“I think I can win again in Anaheim,” said Weimer. “Two weeks ago I think my stiffest competition was Dungey and I didn’t get to race with him. At Phoenix we raced during the main and I was able to measure up against him and I’m feeling confident I can win.”

Windham’s GEICO Powersports teammate Dan Reardon and Trey Canard have showed flashes of brilliance in 2009 but have yet to win a main event. Reardon finished fourth at Anaheim 2 last year and performed well at the Anaheim 1 opener where he won the holeshot. Canard suffered a hard crash at Phoenix and will limp to the Anaheim 2 starting line.

Ashley Fiolek is the newest member of the Honda Red Bull Racing team. Fiolek will represent Honda Red Bull Racing in the 2009 WMA Women’s Motocross Championship, X-Games 15 and various other events. She will join the team at A2 to meet fans, sign autographs and be introduced to the Anaheim supercross crowd during the night’s ceremonies.

When the season kicked off at Angel Stadium two weeks ago, Honda Red Bull Racing’s Andrew Short earned the best AMA Supercross class finish of his career with a second-place finish.

“Anaheim 2 is going to be great. Knowing I had good success at Anaheim 1 this year gives me confidence going into Anaheim 2,” said Short. “I’m also looking forward to the great crowd atmosphere and good track conditions.”

“After my good result last weekend in Phoenix, I’m really looking forward to doing more testing in Corona this week in preparation for Anaheim 2 on Saturday,” said Tedesco. “I usually ride OK there and I think it will be a lot better for me then A1. I think the dirt will be a lot better and hopefully it’s drier so it should be good.”

Muscle Milk/MDK/KTM Factory Racing Team rider Justin Brayton is confident about his conditioning and speed. He looks forward to bettering his already exciting second place finish at Phoenix as he prepares for the third race of the AMA Supercross Lites season in Anaheim this weekend.

“I was really happy with my finish last week. It felt good to get my first podium finish of the season,” commented Brayton. “I feel like I rode a little too patient last week and now that I have one podium out of the way, I’m ready to turn on the aggression and hopefully get a win.”

Both Brayton and his teammate Ryan Sipes were fortunate enough to have some of their family members at the Phoenix round. “My step-dad has been with me for a few weeks now and it’s been great having him come to my practices. He packed my gate during my practice starts for the first time in five years,” stated Brayton.

Sipes, who finished seventh at Phoenix, has been focusing on his intensity this week. “I feel I need to work on my speed and this week we have been doing a lot of sprints to focus on my intensity,” reported Sipes. “I am making progress each week to my own conditioning as well as my bike set-up. I’m pretty sure we have just about everything dialed in now and hopefully my results will show it this weekend.”