Jeff Stanton is a three-time AMA Supercross and three-time AMA Motocross Champion, his last title coming in 1992. The Michigan native is still involved in the sport, advising the Honda Red Bull Racing team and riders Davi Millsaps, Andrew Short, Ivan Tedesco and Ben Townley (at least when he’s not coaching seventh-grade girls’ and fourth-grade boys’ hoops). We asked Stanton to take a look at the layout of Anaheim II, tell us what he would do out there, and take us on this week’s Smith Optics’ Track Walk. 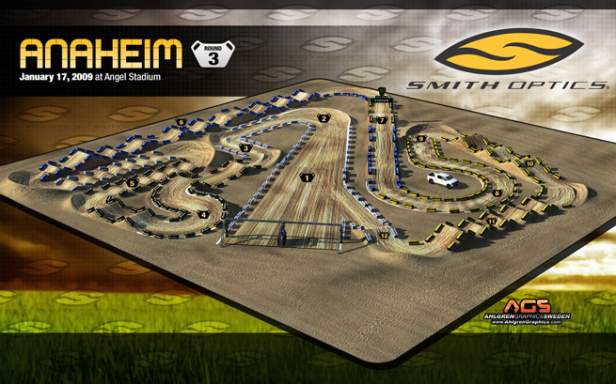 1.) “Anaheim II has a long start—kind of like one of those old Pontiac Silverdome starts—into a sharp left-hander. On that gate, I’m going to be right over on the left-hand side; it’s almost a straight shot and I’m a play-it-safe guy. With a long start, guys are going to carry their speed on past that first turn and run it way up high. I’m going to guess the top-three guys will start in the first three spots on the left.”

2.) “The first turn is almost a 180. With those 450s hauling the mail like they do, they’re going to carry their speed deep into that turn. I’d just try to hold that inside.”

3.) “Here’s a little chicane, a little left then a sharp right, with a big double coming up. That’s something we haven’t seen right after the start. To me, it almost looks like it’s going to be a split-lane. If it is, the inside for sure, though you could possibly need to go outside to do the big double. But I don’t see a whole lot of passing going on right there. The first place I see some major passing is after turn four or five—the first whoop section.”

4.) “This track looks old-school up to the first whoop section: some big, sweeping turns, some big doubles... I think they’re trying to open up these tracks a little bit to make a little better racing, and so far it has paid off.”

5.) “Now we go to the back-to-back whoop sections, which lends itself to passing. Some guys are going to carry their speed through those whoop sections and set themselves up in the turn after that first whoop section. Some guys will come up high, chop it off, and cut back underneath, kind of the same situation where we saw Bubba and Chad at the first race when they had their little accident. Bubba may run it inside on Chad; Chad may go up high and try to square off underneath him. I see that as a good passing lane, and it all depends on setup and who carries the momentum through that first section of whoops.”

6.) “Now we get to our first true rhythm section. Quite honestly, rhythm sections are great for the spectators, but these guys are pretty much doing them the fastest way and everyone else mans up and does it. So, there’s not going to be a lot of great passing here. The only way there’s going to be some passing is if anyone comes up short or makes a mistake and can’t get going again. Any more, the rhythm sections are a part of racing and everyone does it the best way, whether it be a triple or a quad or whatever. This time it’s such a long straightaway that if you make a mistake anywhere you’re going to have big troubles.”

7.) “Next, you make a right-hand turn and come to the finish line, which is just two big doubles. It’s pretty cut and dry there, but it could be spectacular.”

{LINKS}8.) “After the finish line, we see rough, outdoor motocross. It looks like a 270-degree corner, which reminds me of the third and fourth corner we already ran through. Here, you’ll be on the pegs, figuring out the best rhythm to go through here, or maybe jumping two or three at a time. But it’s a great place for riders to make mistakes, especially throughout the night if that gets hard and slippery. I like that whole section; it’s just something different we don’t see a lot in supercross. It’s a good spot to be on your toes.”

9.) “It also looks like we might see some sand in this section, too, which has proven to be tough here the past couple of weeks—it cost Jake Weimer a possible victory last week. I like the sand and I like seeing those big, wide corners like that—it’s just something different and it’s great for the spectators, even though it’s not typical for the riders. They probably don’t have that on their home supercross track to practice all week!”

10.) “We’ve got another bowl turn into a basic, whip-it triple—really no mistakes to be made there.”

11.) “This next section is kind of funky because you have five jumps, so that’s either two-three or three-two. Again, it’s going to play out throughout the day in practice to see which way is quicker. You’re just going to have to do whatever is safest and quickest throughout the main event and not make any mistakes doing it.”

12.) “After that, you hit a right-hander and a little kicker jump and back down the start straight. That straight has a little chicane in it, so there’s a potential place to set somebody up and pass them. There’s some good potential for some passing and stuffing some guys in those turns!”