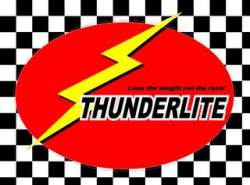 There's nothing worse than getting a couple laps into a mud race and having your bike feel heavier than a Lincoln Continental because of all the mud stuck to it. According to really smart people with degrees in math and numbers and whatnot, every seven pounds gained or lost is equivalent to one horsepower gained or lost. ThunderLite Fenders Liners stick on your bike's fenders and keep mud from collecting under them. The result is less weight and more horsepower for you. Santa Claus even uses him on his sleigh to keep snow from building up.