Thunderlite and HDT had been working on Opertion THUNDER for several months prior to the event. After, and only after the Defense department Test and Evaluation center, Research and Developement Center referred to as RDEC along with TACOM - Tank automotive command and last but not least Small Business all agreed with refence to 7lbs is 1 hp all vehicles traveling in debilatating terrain should possibily be equipped with Thunderlite to save gas and travel lighter and more efficiently giving them more agility so they can go faster and stay efficient at the same time. Also creating less wear and tear and saving time cleaning up!

Thunderlite received a phone call from TACOM to find out if they could get Thunderlite set up as a vendor. They gave Thunderlite the Phone numbers for SOCOM, Special Operations Command. They received Thunderlite along with pictures of the Top Pros who endorse the product. They sent Thunderlite for testing and have agreed that Thunderlite would be beneficial.

Along with testing from HDT and SOCOM and all the top authorities Thunderlite is to be on over 500 Military bikes and several other types of military vehicles. Thunderlite has a contract pending at this time and www.thunderlite.com has been linked to the Defense Departments computers along with NASA.

The peel and stick application is desirable for any surface succeptable to mud build up and is removable and ideal for vehicals, helmets etc.

Jonathan Hayes and Thunderlite have had conversations of bringing diesel technologies to GNCC racing and see it as having a great possability for riders at both amatuer and professional level! The awsome SICK DIESEL WAR MACHINES will be available to the consumer soon. Check out www.dieselmotorcycles.com and see technology at its best HDT. To order your own Thunderlite and Jungle Juice, A Hydraphobic Antistatic Polymer created to spray on the Thunderlite to add lubricity creating Ultra Release Technology created specificly for industrial applications, Stay Clean Light And Fast Lose The Weight Not The Race go to, www.thunderlite.com.

Thunderlite is also joining an established race team which will be announced at a later date. Female racers known as Thundercats will be part of the team. So checkout both sites and see how the BIG DOGS ride. Thunderlite is featured in the Deluxe section of Racer X. Order your set and find out how you can receive a free supply of Jungle Juice at www.thunderlite.com or call Thunderlite customer service 440-785-6980. Also available for 4 wheelers and MINIS. 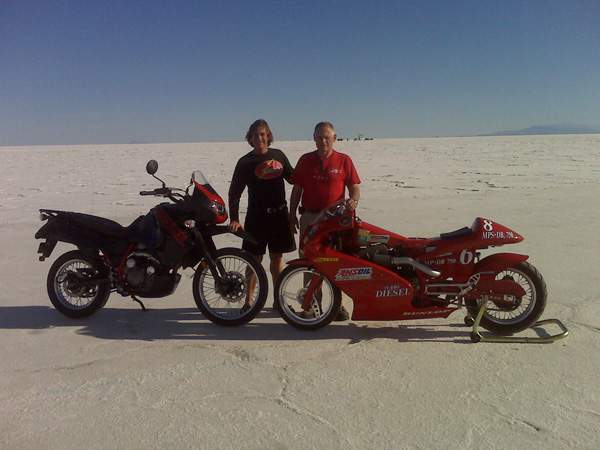