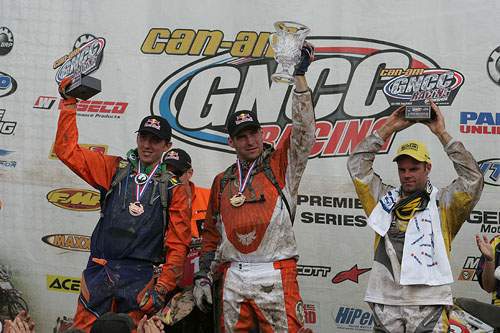 
SNOWSHOE, W. Va. -- Prior to this weekend, David Knight said the Snowshoe Can-Am Grand National Cross Country (GNCC) race was his favorite event of the 2007 tour. That love affair hit rocky times but came out intact on Sunday as the defending champion and current points leader overcame bad luck and held on to win the 2008 edition of the event, sponsored by Moose Racing.

Knight was pleased with the results and can now numerically clinch the GNCC title at the next race, scheduled for the end of September in New Berlin, N.Y.

"Everything from the off just went wrong for me today," said Knight, "I had trouble at the start, and I got hit in the shoulder with a rock on the second lap, so I'm glad at least the first race of the season is over.

"It is nice to know that I can wrap up the championship at the next race," added Knight. "KTM has some new bits for the bike, so that should help."

However, the real story of the three-hour event on the 14-mile course around picturesque Snowshoe Mountain Resort, was home state rider Thad DuVall from Williamstown, W. Va. Duvall, a rider in the Pro Lites class (XC2) made history on Sunday by leading most of the event and finishing second overall. This marked the first time in GNCC's 29-year history an XC2 rider finished on the overall podium.

"I couldn't have gone and faster and I couldn't have gone any slower," said Knight, who overcame his motorcycle shutting off at the start, trouble in the middle of the race with a mud hole and the charging DuVall late in the event. "It was just a matter of getting to finish and stopping."

The next race for the Can-Am GNCC Series is scheduled for Sept. 27-28 at Unadilla Valley Raceway in New Berlin, N.Y.

WHIBLEY CELEBRATES...Paul Whibley had more to celebrate this weekend than just his fourth GNCC podium. The New Zealander was happy to see that his nation's rugby team, the New Zealand All Blacks, beat out its rival Australia to win the Tri-Nation's Cup, one of professional rugby's highest honors. In fact, several Whibley fans were seen wearing All Black's clothing to celebrate the victory.

HOME FIELD ADVANTAGE...It was obvious that Thad DuVall was a fan favorite here. During a special podium celebration to commemorate the Williamstown, W. Va. resident's history-making overall runner-up finish the crowd erupted in applause. Many in the crowd were also seen wearing "Bad Thad" T-Shirts.

SUN AND MOUNTAINS...Sunday's weather was a complete turnaround from Saturday. Sunny skies and temperatures in the mid 60s made for a postcard event with the Alleghany Mountains as the perfect backdrop for motorcycle racing.

UNIQUE VENUE...This weekend's race featured a completely different venue from many on the GNCC National Tour. The Snowshoe GNCC is run in and around Snowshoe Village, a full-service winter/summer resort nestled in the mountains of West Virginia. The podium was set up in the middle of the resort with tourists and fans, alike, taking in the post-race ceremonies.

"This is what it's all about," said Event Director Tim Cotter pointing out the vista of mountains just off the start line. "The Snowshoe staff have been very helpful and open to our needs in putting on this event. To have GNCC race at a resort of this caliber is truly amazing."

WILD LIFE...Many different types of local wildlife were spotted by riders and track crew this weekend, including black bear and deer.

RACING 'EVENT'...This Snowshoe GNCC was more than just a race weekend as many different activities were help adjacent to the race track. A Friday golf tournament to benefit RiderDown Foundation kicked off the weekend, while craft events for children, a climbing wall, bungee jumping and much more were held during the races.