Results Archive
GNCC
Loretta Lynn's - eMTB Only
Articles
Amateur
Loretta Lynn's
Articles
MXGP of
Sweden
Articles
MXGP Results
Full Results
MX2 Results
Full Results
Upcoming
Motocross
Unadilla
Sat Aug 13
Articles
Upcoming
MXGP of
Finland
Sun Aug 14
Articles
Upcoming
Australian MX
Queensland Moto Park
Sun Aug 14
Articles
Upcoming
Australian MX
Coolum
Sat Aug 20
Articles
Upcoming
Motocross
Budds Creek
Sat Aug 20
Articles
Upcoming
MXGP of
Charente Martime
Sun Aug 21
Articles
Full Schedule
Welcome to the Shift Number Cruncher. We have a good one for you this week! With the 32nd Annual Southwick Outdoor National upon us we took a look around the racing world and tried to see what related to the number thirty two. And, man, it is down right spooky how numbers seem to follow a pattern. It didn’t take long for me to raise both eye brows when we discovered how many things pertain to #32 in the world of racing right now. And outside of racing, The NFL is getting ready to roll. How does #32 pertain to the NFL? Well around these parts folks make a pretty big deal out of the “immaculate reception.” This number really made us appreciate how fun the Shift Number Cruncher is to put together week. Enjoy. 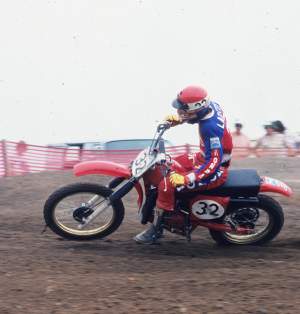 “Bad” Brad Lackey won 19 professional races in his career, but only one on a Honda, at the 1977 Sonoma, California Trans-AMA event. 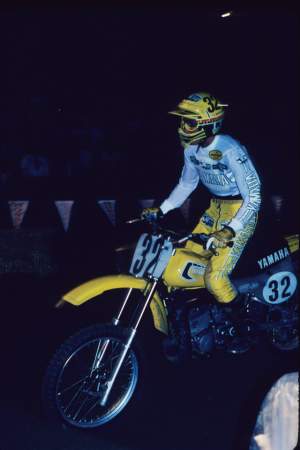 Check out this badass picture of Scott Burnworth racing at the 1981 Superbowl of Motocross. Man, that silver and yellow YZ250 is cool. Even for 1981. 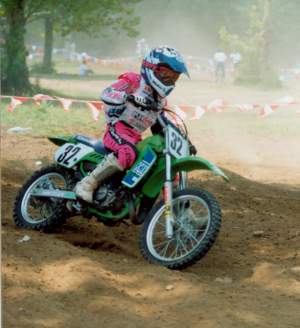 I raced with #32 at the 1989 AMA National Championship Finals at Loretta Lynn Ranch. Won the 65cc championship and placed 8th overall in the 85cc (7-11) class. Would have gotten a top-five, but Zac Bradshaw took me out in moto two. Note the smashed radiator. 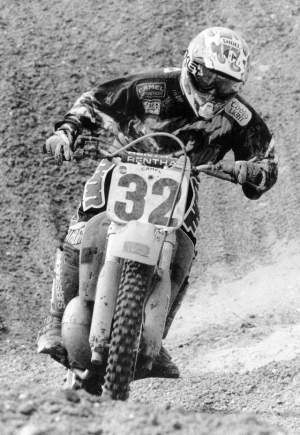 When you sit back and name some guys that rode for a lot of teams, “The Bud Man” should definitely be in the mix. Let’s see here: factory Suzuki, Peak Antifreeze/Pro Circuit, privateer Honda, privateer Kawasaki, Great Western Bank, Tuf Racing Honda, Primal Impulse Suzuki….what are we missing? Anyways, Buddy was #32 in 1993. 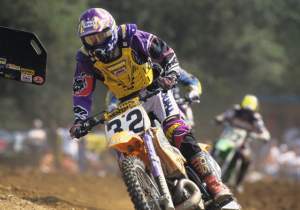 The late great Kevin Crine was AMA Pro #32 in 1996. His father, John Crine was on hand at Budds Creek this year to present the Southern Maryland Dirt Riders Club award to the top privateer. They dedicated the award to Kevin, who was the epitome of a privateer. 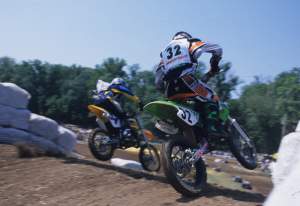 There are a couple of things that are interesting about this picture. For starters, that is James Stewart wearing #32 in 2000 on his way to the win in the 85 modified (14-15) class. Last weekend he won his first outdoor championship in the premiere class. Any takers on who #34 is? Free Shift t-shirt to the first three correct answers. 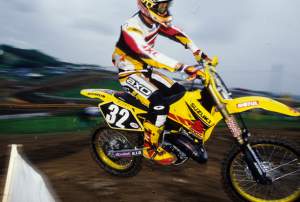 Here we have France’s Rodrig Thain running the “three-two” in 2001. This was right in the middle of the huge French Invasion that struck American Motocross around the new millennium. I think this was the year Ping threw Rodrig down Mt. St. Helen’s too…anyways, Thain is back at it in the GP’s. 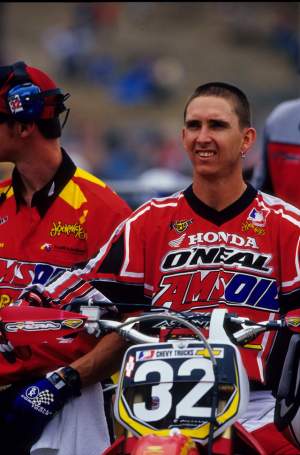 With the 32nd annual outdoor national at Motocross 338 coming up this weekend I thought it was cool to remember when Michael Byrne won the opening moto of the 125 class (on a CR125) back in 2002. 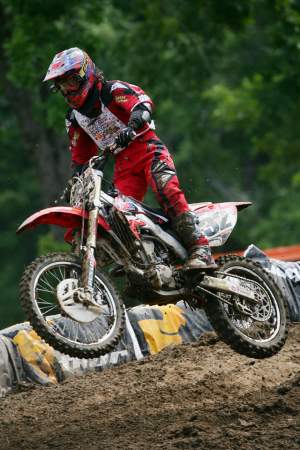 The big buzz at Millville last weekend surrounded Texan Blake Wharton. The new kid on the block threw down impressive lap times and produced two strong motos for fifth overall. The number he wore the week before? #32 baby. 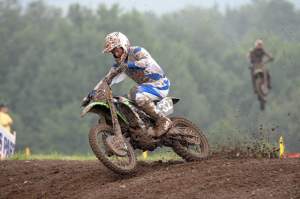 The “Kansas Komet” showed some muscle in “SX08” but his only shinning moment in the outdoors came at Unadilla with he pulled the second moto holeshot. How does Hahn’s luck work? The moto was red-flagged due to LIGHTNING. 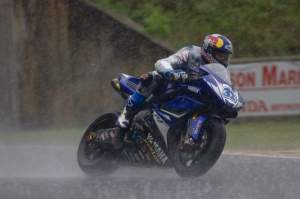 These guys are gnarly. Eric Bostrom raced with #32 last weekend at Virginia International Raceway (AMA Round 9), where he scored a solid pair of fourths behind the trio of dominant factory Rockstar/Makita Suzukis. Also, the apparel business he runs with brother Ben (www.bozbros.com) is going really well.

There is a plethora of other #32s out there so I’m going to turn it over to you guys. Please send your e-mails to andy@racerxill.com.
Read Now
September 2022 Issue Now Available